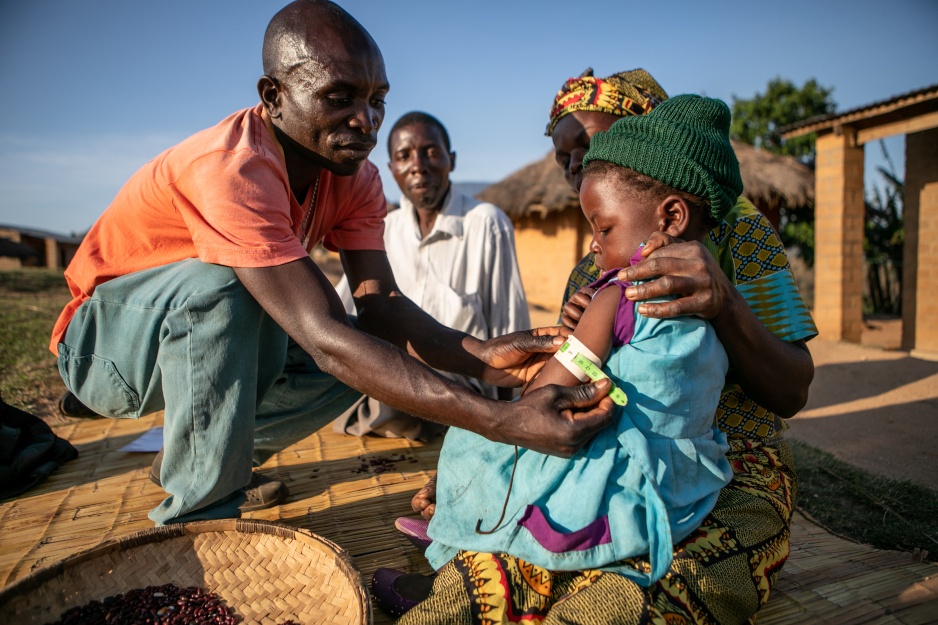 Photo by Karin Schermbrucker/for PIH
Community health worker Samuel Saidi checks Flores Foster, 5, for signs of malnutrition during a visit to her family's home in Kaingirira Village in Neno District, Malawi, in October. The upper-arm measurement indicated a healthy weight for Flores. Holding Flores is her mother, Olaliya Luwisi, and looking on is her father, Edward Foster. An informational story about malnutrition screening was one of the top-read stories on PIH's website this year.

The biggest news for Partners In Health supporters in 2019 is clear: The appointment of our new CEO, Dr. Sheila Davis, and a feature about her incredible dedication to PIH over 10 years with the organization, topped the list of the most-read stories on our website this year. Davis took the CEO helm in June and already has begun realizing her inspiring vision, bringing leaders of all our teams together to foster collaboration with a new Leadership Council and ethic of “OnePIH.”

That shared mission is evident in all of the stories that caught readers' attention this year. From improving food access in Navajo Nation and welcoming the first class of medical students—two-thirds of which are women—at the University of Global Health Equity in Rwanda, to an Ebola survivor who’s thriving in Sierra Leone and quadruplets born at University Hospital in Mirebalais, Haiti, 2019 was a year to remember in all of the places where PIH works.

Oldine Deshommes never has an empty office. The social worker is a go-to resource for every cancer patient passing through the double doors of the Roselene Jean Bosquet Center at University Hospital in Mirebalais, Haiti.

Deshommes has worked with Zanmi Lasante, as Partners In Health is known in Haiti, for nearly 10 years, starting shortly after the devastating Jan. 12, 2010, earthquake by providing psychosocial support to survivors living in temporary shelters in the capital, Port-au-Prince. Read more.

A recent PIH study at University Hospital in Mirebalais found that increasing contraceptive education for nurses and providing new mothers with more family planning access and options led to, “a great improvement in the percentage of women who had delivered in the maternity ward accepting a long-acting contraception method,” such as the Jadelle implant, which can be left in  a patient’s upper arm for five years. Read more.

8. Celebrating Six Years of Accomplishments at University Hospital in Haiti

Six years have passed since University Hospital in Mirebalais opened its doors and began transforming health care across Haiti's Central Plateau. Since March 2013, thousands of patients have had access to specialized care provided by clinicians working with Zanmi Lasante, as Partners In Health is known locally. Read more and check out our interactive map of the hospital campus.

The University of Global Health Equity, in the rural Butaro community in the mountains of northern Rwanda, made gender equity a priority in admissions, as part of efforts to increase the number of female doctors in Rwanda and beyond. The Class of 2025 is comprised of 20 women and 10 men, all from Rwanda—and all with personal experiences of inadequate health services that have inspired them to work toward positive change in their home country. Read more.

7. 'We Get to Set the Tone': UGHE's First On-Campus Students Reflect on Landmark Year

The 24 students in the 2018-19, one-year Master of Science in Global Health Delivery program at the University of Global Health Equity, were the first class to live and study full-time on UGHE’s campus, formally inaugurated last January in northern Rwanda, about 80 miles north of Kigali. The class included students from 11 different countries. Read more.

Mariama Kamara felt suddenly unwell upon coming home to her daughter and grandson one evening in August 2016. After walking the familiar dusty road home from the diamond mine where the 43-year-old worked in Sierra Leone’s Kono District, she sat down in the kitchen with a worsening headache and nausea. The terrifying realization came to her as she listened to her family’s playful evening chatter—her symptoms pointed to Ebola. Read more.

5. Need to Know: MUAC and Malnutrition

Spend a day at any Partners In Health site and there’s a good chance you’ll hear a phrase you’re unfamiliar with. Perhaps it’s a clunky acronym or polysyllabic drug name. But don’t worry: Keeping up with the ever-evolving world of global health is hard, even for insiders. In Need to Know, we cut through the complexity and deliver the most pertinent and interesting information on a single subject. Today, we fill you in on mid-upper arm circumference. Read more.

Erneste Simpunga was diagnosed with rheumatic heart disease at age 16, in his home country of Rwanda. After a lengthy journey to surgery, he had two heart valves replaced in July 2008, at Brigham & Women’s Hospital in Boston. The experience inspired him to become a doctor, and on November 8, 2019, his 30th birthday, he graduated from the University of Rwanda’s School of Medicine and Pharmacy. Read his personal account of his life story.

Madeleine and her husband, Stevenson (names changed for privacy), knew their family life was about to drastically change. They had seven children at home in Port-au-Prince, Haiti, and found out through an ultrasound that they were expecting triplets. But on a Saturday in late September, Madeleine was among thousands of Haitians across the country caught in life-threatening situations, as Haiti continued to be mired in protests that closed health facilities amid roadblocks, demonstrations and more.

Yet Zanmi Lasante, as Partners In Health is known locally, has kept open all its clinics and hospitals at 12 sites across the lower Artibonite and Central Plateau, including University Hospital in Mirebalais. So when Madeleine and Stevenson, a 48 year-old shoe shiner, knew they needed to get to a hospital—and fast—a family member began asking around to see if University Hospital was still open. It was.

They just had to make it there. Read more.

On Navajo Nation, grocery stores are few and far between. Most people shop at gas stations and trading posts, where healthy foods are scarce. To widen access to fruits and vegetables—and improve overall health—Partners In Health (PIH) and its sister organization on Navajo Nation, Community Outreach and Patient Empowerment, launched an initiative to encourage shops to stock and sell produce and traditional Diné foods. Read more.

Dr. Sheila Davis knows about her reputation as a firefighter at Partners In Health. She led the organization’s Ebola response in West Africa from 2014 to 2016, then helped transition the teams to rebuilding the health systems in Liberia and Sierra Leone. She was the first one called to help the Haiti team when Hurricane Matthew wreaked havoc in Haiti in October 2016, and when flooding wiped away entire neighborhoods in Lima in the spring of 2017.

Each time, Davis was the steady hand that guided PIH through the literal, or figurative, storm. So it was no surprise that she emerged at the top of a global search for PIH’s next CEO, following the retirement of Dr. Gary Gottlieb at the end of June. Read her thoughts on her work as an HIV advocate, the positive response she’s received from nurses on her appointment as CEO, and her vision for PIH’s future.

On June 5, Partners In Health named Dr. Sheila Davis as its new Chief Executive Officer. Formerly the Chief of Clinical Operations and Chief Nursing Officer, Dr. Davis succeeds Dr. Gary Gottlieb, who in the spring of 2018 informed the board of his intention to step down.

“Thanks to her vast experience, strategic acumen, unwavering solidarity, and passionate commitment to our mission, Sheila is a brilliant choice to help the organization meet more of the needs of those we serve,” Dr. Gottlieb said. Read more.