On Rounds with Dr. Paul Farmer 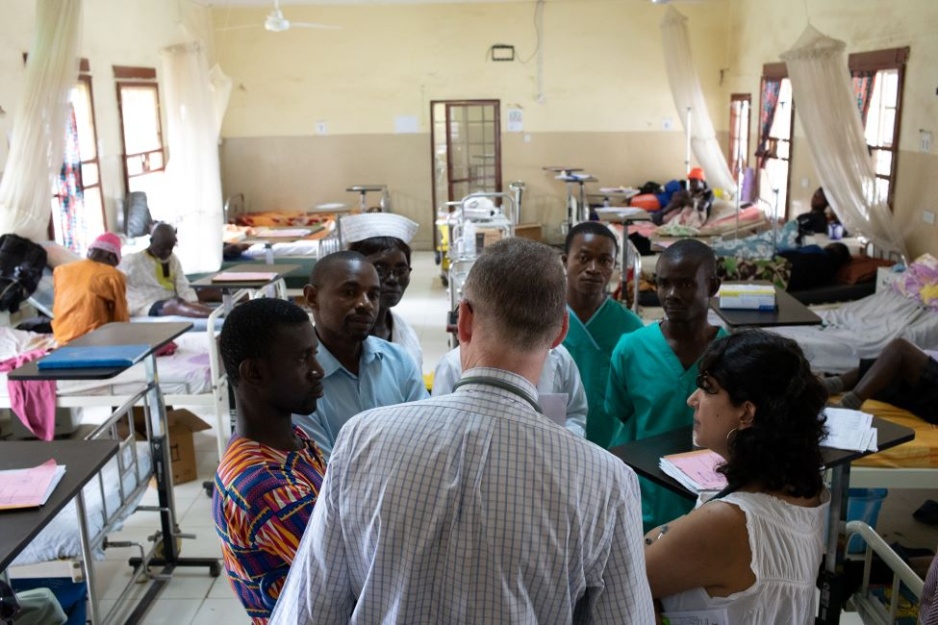 In the nearly 33 years since co-founding Partners In Health, Dr. Paul Farmer has gone from a medical student working in a one-room clinic in rural Haiti to a renowned infectious disease doctor, professor of medicine, and leader of one of the world’s most influential humanitarian organizations. Through all of this growth, for both him and PIH, he’s never stopped seeing patients: spending time by their bedsides, advising on their treatments, and doing whatever it takes to make them well again.

During visits to PIH-supported hospitals in 11 countries around the world, Farmer conducts rounds to help care for the sickest patients and mentor local clinicians and medical students. Below, accompany him on rounds at Koidu Government Hospital in the eastern Kono District of Sierra Leone, and see and listen to how he and the PIH team are delivering unprecedented, lifesaving health care.

PIH-supported Koidu Government Hospital (KGH) is Kono’s main facility providing secondary health care — from C-sections and other essential surgeries to treatment for complex illnesses and conditions, such as tuberculosis (TB) and heart failure. When the PIH team arrived at the height of the Ebola epidemic, in the fall of 2014, the hospital had been shuttered by Ebola, and several nursing assistants had just died of the disease.

Since PIH began improving the hospital’s clinical care and increasing community outreach, more people than ever before have visited the facility, which is a significant accomplishment given the extreme poverty and historical mistrust of the health care system among Kono’s 500,000 people. Last year, the hospital admitted nearly 3,000 inpatients and provided more than 4,700 outpatient visits.

Farmer was led through the hospital to consult on the staff’s toughest cases by Dr. Marta Patiño Rodríguez, KGH’s medical supervisor and a fellow infectious disease doctor.

Their first stop was KGH’s newly opened adult emergency ward, where 67-year-old Isatu* had arrived in respiratory distress and soon fell unconscious. The emergency team had administered oxygen, placed her on a heart rate monitor, and obtained her history: she lives with congestive heart failure and ran out of the two-week supply of medication she had received at the hospital three weeks ago.

Alongside Rodríguez and Dr. Chiyembekezo Kachimanga, KGH’s head of noncommunicable disease care and a PIH veteran from Malawi, Farmer coached four young doctors and the ward’s two nurses through a physical exam of Isatu, and congratulated the staff on the care they had already delivered. “This is the first patient I’ve seen with the new triage system, and they just saved her life,” he marveled.

A quick physical revealed some swelling in Isatu’s legs and an enlarged spleen, likely the result of repeated bouts of malaria. But more importantly, it exposed the cracks persisting in the Sierra Leonean health care system — in this case, inadequate attention to community-based care and resupply of her medications.

“This is not your fault,” Dr. Farmer said to the team about the patient’s condition. “It’s a structural problem.” What was most needed was stronger follow-up at home to ensure Isatu could more easily refill her prescriptions, despite obstacles like poverty, distance, and a lack of transportation to the facility. 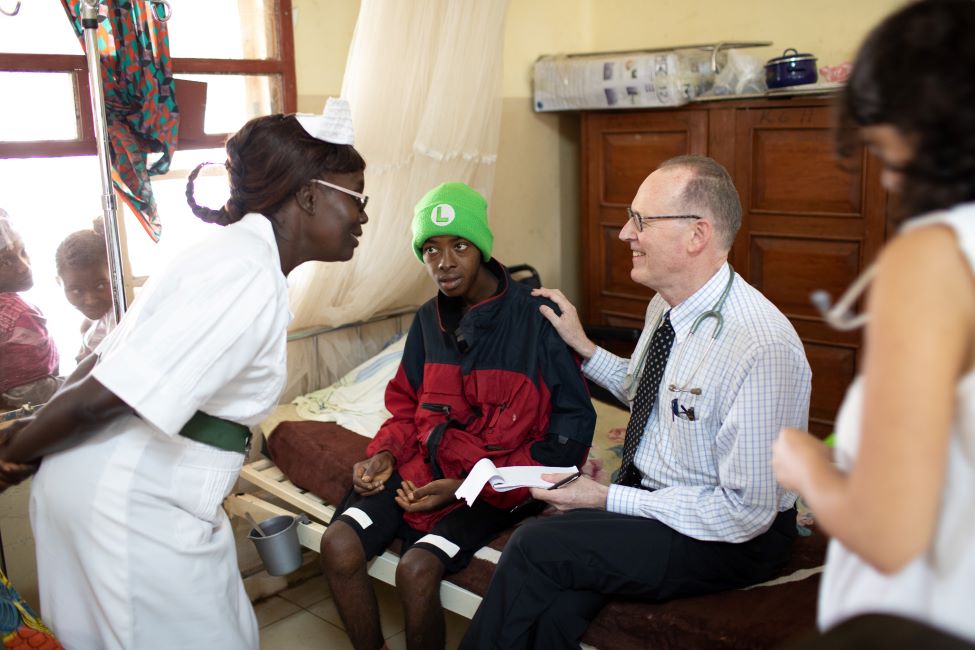 A visit to 22-year-old Foday* in the male inpatient ward was next. Farmer took notes as Rodríguez summarized the case: based on a physical exam and ultrasounds, Foday presented a loss of appetite, inflammation around the lungs and in the knees, and abdominal pain and distension. Clinicians had tested him for TB using a GeneXpert machine — the most advanced diagnostic tool possible for such a case — but examination of sputum from his lungs had come back negative.

Still, TB was Farmer’s suspicion, though he listed a number of infections, malignancies, and inflammatory diseases that could also account for Foday’s signs and symptoms. He encouraged the staff to check Foday’s white blood cell count and run a few more lab tests before starting him on any intensive treatments.

“Where are our Rwandan ultrasound superstars?” he asked with a smile. One of his former students from Rwanda stepped forward with the requisite equipment. “This guy is the best,” he said of Dr. Nyimanzi Valens.

“The main problem in patients like this is delay in TB treatment, but I’m not positive he has TB,” he added to the others rounding with him. “We’ll get his social history, review his labs, and put it all together.” 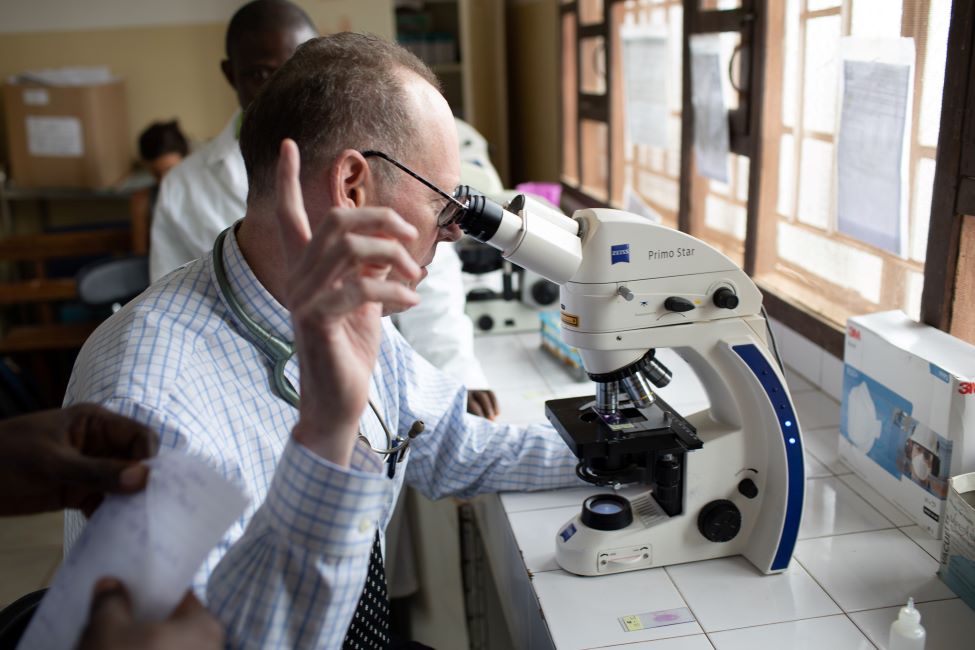 Most samples tested normally, but the pleural fluid did not. Looking through a microscope, each clinician saw that the fluid surrounding Foday’s lungs had an elevated white blood cell count, signaling infection. Foday’s chest x-ray did not show the disease within the lungs. But extrapulmonary TB, or TB located outside of the lungs — difficult to diagnose even using GeneXpert — was their agreed upon diagnosis. The team could start Foday on TB medication.

“Missing atypical TB presentations constitutes a big crisis in this hospital and this country,” Farmer remarked. “Over-treating this disease is not going to be your problem for a while.” 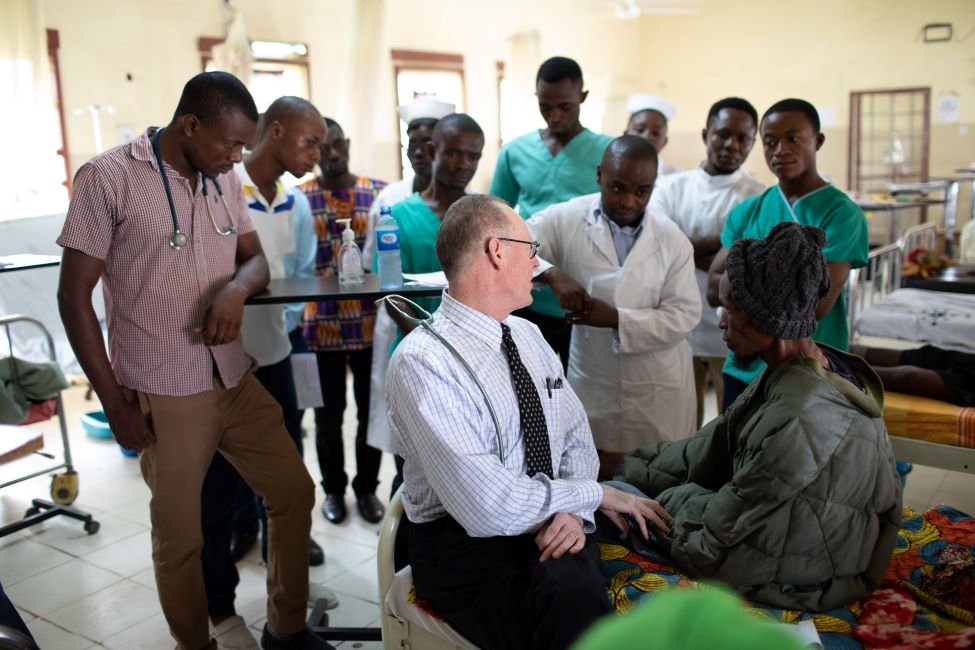 Indeed, another TB case was brought to Farmer back in the male inpatient ward. Moussa*, 50, was in critical condition: he was living with AIDS, TB, and chronic dysentery; had recently had a fever, diarrhea, and loss of appetite; and was suffering from the most severe wasting syndrome in the entire hospital. Though Rodríguez had started Moussa on antiretroviral therapy and TB medications weeks ago, his health had not begun to improve — a concerning sign.

“We should have some response,” Farmer said. That treatment wasn’t working could indicate several possibilities: that the patient was suffering from an additional “opportunistic infection,” wasn’t really taking his medications, or had some other serious health condition, like a malignancy.

Turning to the team of KGH’s current and future doctors, Farmer reminded them: “Common things are common. As a clinician, you look at the X-rays and lab data, look at the chart, and ask, ‘What could he have that’s so overwhelming?’” 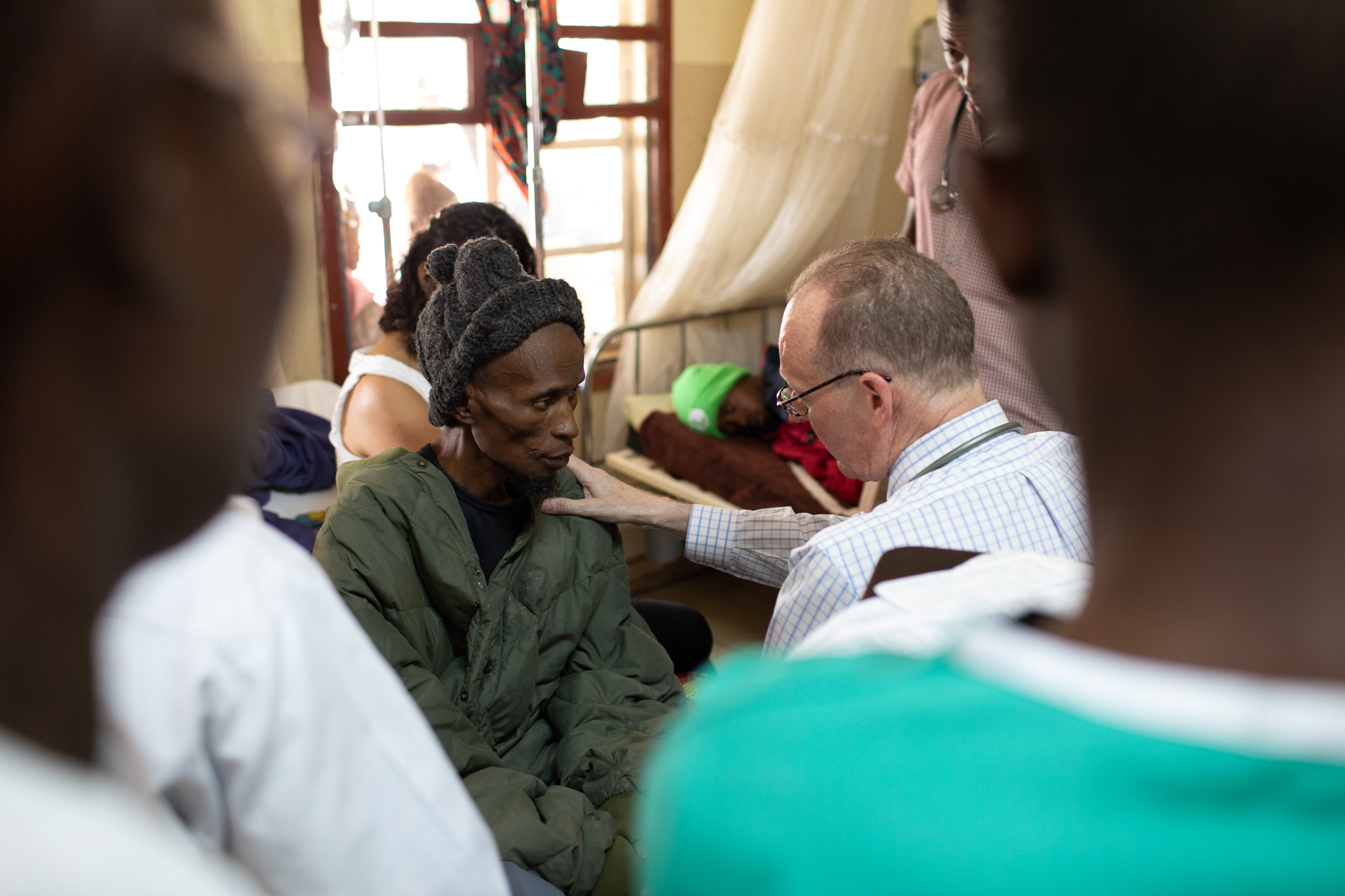 The group’s next move would be to re-examine Moussa’s X-rays. But in the meantime, Farmer emphasized the importance of stimulating his appetite, as quickly as possible.

“What is the food you would most like to eat right now?” he asked Moussa, before turning back to the team of doctors and the ward’s nurses. “I would like rice, beans, or soup,” Moussa replied softly.

“Whenever a patient is wasting away in front of you, and he’s on therapy, he’s in a dangerous situation,” Farmer cautioned. Normally clinicians would insert a feeding tube, but Moussa was still able to eat on his own. Given that, Farmer said, “we do everything except break Sierra Leonean law” to make Moussa feel better.

Farmer asked staff to speak with the patient in Krio, the lingua franca, to determine what his favorite food might be, then go and find it for him as quickly as possible to begin to restore his appetite. 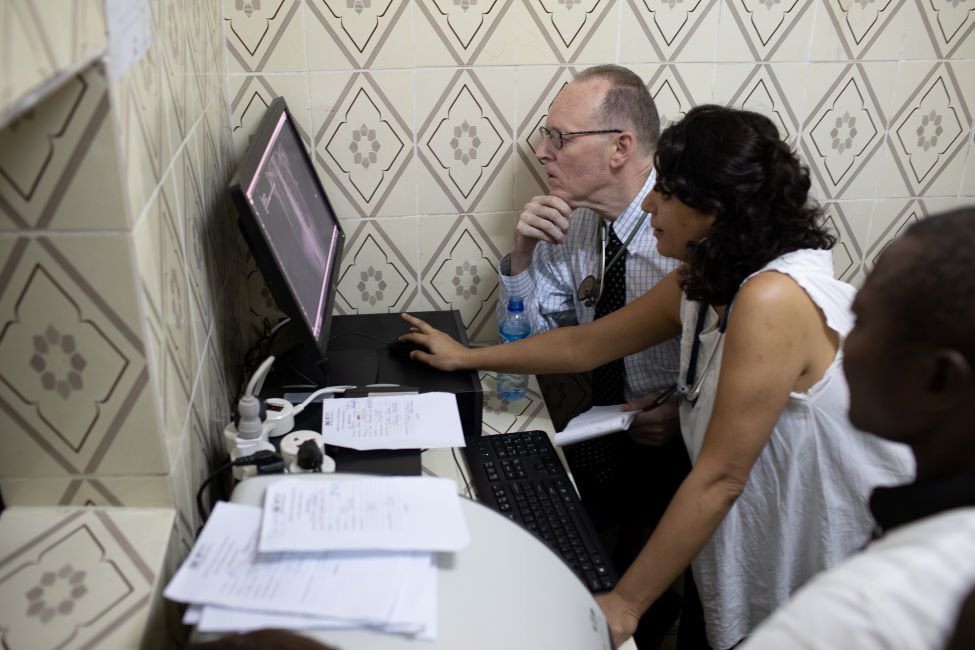 In the radiography department, the team pulled up Moussa’s X-rays, which Farmer said was “classic miliary film,” showing scattered opacities in each lung. “It’s still too classic a presentation of TB to change the treatment,” he said. It was possible that the medication just needed more time to take effect.

Common things are common. And in this case, starvation — an age-old barrier to health — was keeping Moussa’s condition from improving. Food would prove as important as any medication. Farmer advised to prioritize feeding, medicine checks, and an additional antibiotic. After three weeks, if Moussa did not begin to feel better, the team could consider a new diagnosis or treatment.

Farmer said Moussa reminded him of patients he used to see in Malawi, Rwanda, and Haiti, countries where PIH has provided support for twice as long as it has in Sierra Leone, where it began collaborating with the government in 2014 to battle the Ebola epidemic. “We don’t see that much anymore in those countries,” he said, “because of antiretrovirals, food support, and community health workers.” 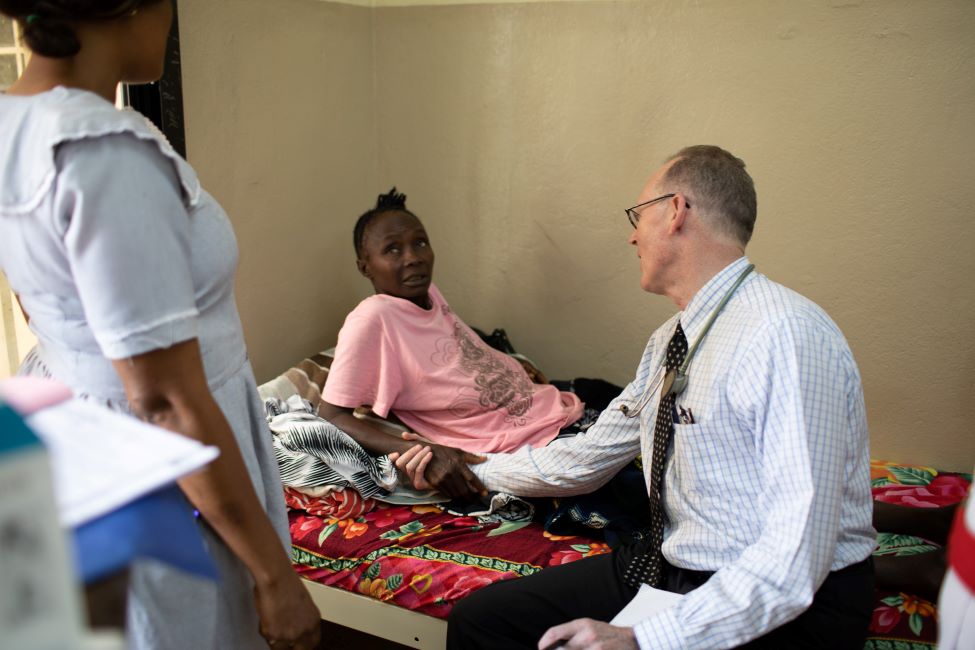 Farmer’s last stop of the day was the women’s inpatient ward, where 47-year-old Marie* had been admitted three days earlier after experiencing a sudden onset of pain, weakness, and then paralysis in her legs. The doctor tapped Marie’s knees; there was no response. She was able to squeeze his hand, but said the numbness was climbing.

“Anybody who could walk a few days ago and now can’t, that’s pretty scary,” Farmer said. But it also felt familiar to him. A few years ago in Haiti, during an outbreak of the Zika virus, he saw many patients who experienced this same loss of sensation and sudden paralysis, characteristic of Guillain-Barré syndrome.

The team would have to rule out a tumor, and monitor the paralysis to ensure it wouldn’t reach Marie’s diaphragm, which would prevent her from breathing by herself and require a breathing machine — technology the hospital did not yet have. Confident that it was indeed Guillain-Barré, from which patients can recover, Farmer was mostly concerned about keeping Marie’s spirits up.

“I would spend a lot of time reassuring her,” Farmer said. “I know I would be terrified. What we have to do is make her feel assured that she’s going to make it.”