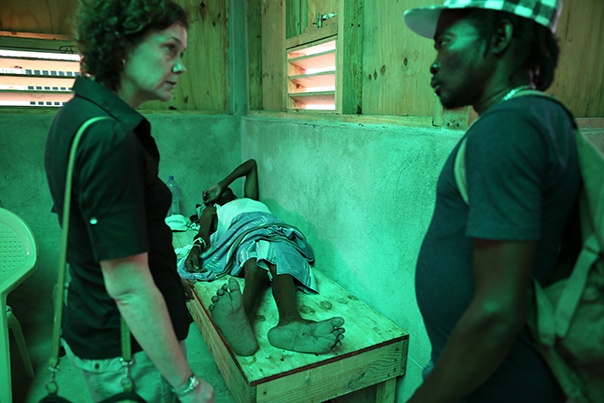 One month before leaving office, Secretary-General Ban Ki-moon apologized publicly for the United Nations’ role in the cholera outbreak that has killed 10,000 and sickened 800,000 in Haiti since 2010. Most important to Haitians and their allies, he also promised to right its past wrongs.

“On behalf of the United Nations, I want to say very clearly: we apologize to the Haitian people,” Ban read from a prepared statement, translated into French and Haitian Creole. “We simply did not do enough with regard to the cholera outbreak and its spread in Haiti. We are profoundly sorry for our role.”

The U.N. will deliver, Ban explained, in two primary ways: responding to and reducing the risk of cholera, and providing material assistance and support to those most severely affected.

Ban’s statement came within months of a scathing report, written by U.N. special rapporteur Philip Alston, that called the international organization’s refusal to accept responsibility a “disgrace.” It also follows widespread media coverage of a lawsuit the nonprofit Institute for Justice & Democracy in Haiti brought against the U.N. in a federal court in Manhattan.

Partners In Health*, known as Zanmi Lasante in Haiti, has battled cholera since the first days of the outbreak in October 2010. Staff have found and treated the sick, distributed water purification tablets to families, taught community members the importance of proper sanitation, vaccinated against the deadly disease, and petitioned the U.N. to respond to the humanitarian crisis it created.

PIH sat down with Dr. Louise Ivers, PIH’s senior health and policy advisor, on Wednesday, the same day the New England Journal of Medicine published her perspective, “Eliminating Cholera Transmission in Haiti.” She discussed the U.N.’s apology, its implications, and PIH’s continued efforts in fighting cholera.

What was your reaction to the Secretary-General’s apology?

An apology is one part of making amends for a problem, so I think it’s welcome.

Ban didn’t acknowledge that the U.N. brought cholera to Haiti. Why not?

I don’t know, but I presume there are some legal cautions on exactly what he says. However, the big public health issue is what PIH is focused on right now.

Haiti and the Dominican Republic developed a 10-year plan for cholera elimination. How does the U.N.’s proposal align with that plan, if at all?

Haiti and the Dominican Republic’s 10-year plan is a big-picture strategic plan, and it is accompanied in Haiti by a shorter interim plan to guide specific details of work for the next two years. The U.N.’s approach is not necessarily a new technical approach. But it aims to support this interim plan that was written by the government of Haiti and partners, including the U.N. humanitarian agencies, as well as provide material assistance to the most affected people.

I noticed Mr. Ban also talked about their obligation to eliminate cholera, about long-term work as well as this $200 million. That’s an interesting new piece of the discussion, as that will cost a lot more than $400 million.

What does the U.N. mean by material assistance?

They’re considering giving cash or other assistance to families and communities that were most affected. They have proposed a specific budget and are trying to come up with a plan within the budget that they have committed to it. But they’re not revealing the details yet.

It’s important that people who are the victims of the harm be the ones who individually or as communities participate in the process of deciding what appropriate compensation looks like to them. As a doctor for the poor, I often say what I think about the public health approach to stopping the harm, but the affected communities need to be represented in the process of considering what they need or want as reparations for the harm—that’s not an easy process.

Do we have any idea when the U.N. might act on these promises?

U.N. humanitarian agencies such as WHO and UNICEF are already working on cholera in Haiti and they have been for years, but they have been underfunded and could have done more if they had more funds. The Secretariat in New York is now fundraising more actively for the work they have promised to accomplish.

How much did public pressure play a role in forcing the U.N.’s hand?

There has been a lot of public pressure, including a lawsuit and regular commentaries by the editorial boards of The Boston Globe, The New York Times, and The Washington Post and coverage in the Miami Herald. I think these definitely played a role.

Do you believe the U.N. is going far enough?

Two hundred million dollars is not enough to stop cholera in Haiti. I think it will take much more, and at the moment the contributions from countries to the fund is voluntary, so there is no guarantee that there will be that amount of money available. That said, it’s a start.

What’s the next step for those who want to see the cholera epidemic end and water and sanitation improve in Haiti?

What’s next is the same thing we’ve been doing since the epidemic started: Trying to make sure we can detect cases, treating the cases we can find as early as possible so we can save lives, and then trying to make progress on prevention. The fundamental part of prevention is access to clean water and sanitation and hygiene measures, but these are so poor in Haiti that it’s a long haul. So then we add vaccinations as one part of the solution while also trying to make progress on the water and sanitation piece. But there needs to be a pretty fundamental change in access to water and sanitation to make a big difference, and that change will also have much broader social and health benefits.

*PIH works with U.N. agencies in Haiti, including the Pan American Health Organization, the United Nations Children’s Fund, and the World Food Program.