Responders carry an injured person past damaged buildings in Les Cayes, Haiti, on Aug. 15, a day after a 7.2-magnitude earthquake devastated the country's southern peninsula. Partners In Health teams have reported displaced people and collapsed buildings across the region. Photo by Nadia Todres for PIH

Dr. Michelson Padovany, a surgeon for Partners In Health in Haiti, said he saw suffering families, collapsed buildings, and debris-filled roads everywhere he went on the country’s southern peninsula this week, visiting affected areas as part of response efforts after the country’s disastrous Aug. 14 earthquake.

Padovany is a cross-site surgical coordinator with Zanmi Lasante, as PIH is known in Haiti, and has worked at St. Boniface General Hospital in the country’s south for the past two years. He knows the earthquake’s hardest-hit region very well, making the assessments of damage and health conditions all the more heartbreaking.

“You can tell that people are suffering from Les Cayes to Jeremie,” he said. “You can see that every single building collapsed. I think what we need now is help for our people. We need help for children, help for adults, help for families. They need water. They need food. They need somewhere to stay at night.”

Padovany was among several Zanmi Lasante clinicians who traveled from Port-au-Prince and Mirebalais to the country’s south late this week to assess damage, assist in coordination efforts, and provide medical expertise in the immediate days following Saturday’s 7.2-magnitude earthquake.

International news reports Friday reported more than 2,100 killed and 12,000 injured, with both numbers still rising. The earthquake destroyed more than 50,000 homes and damaged nearly 80,000 more, leaving tens of thousands of people displaced or without homes. 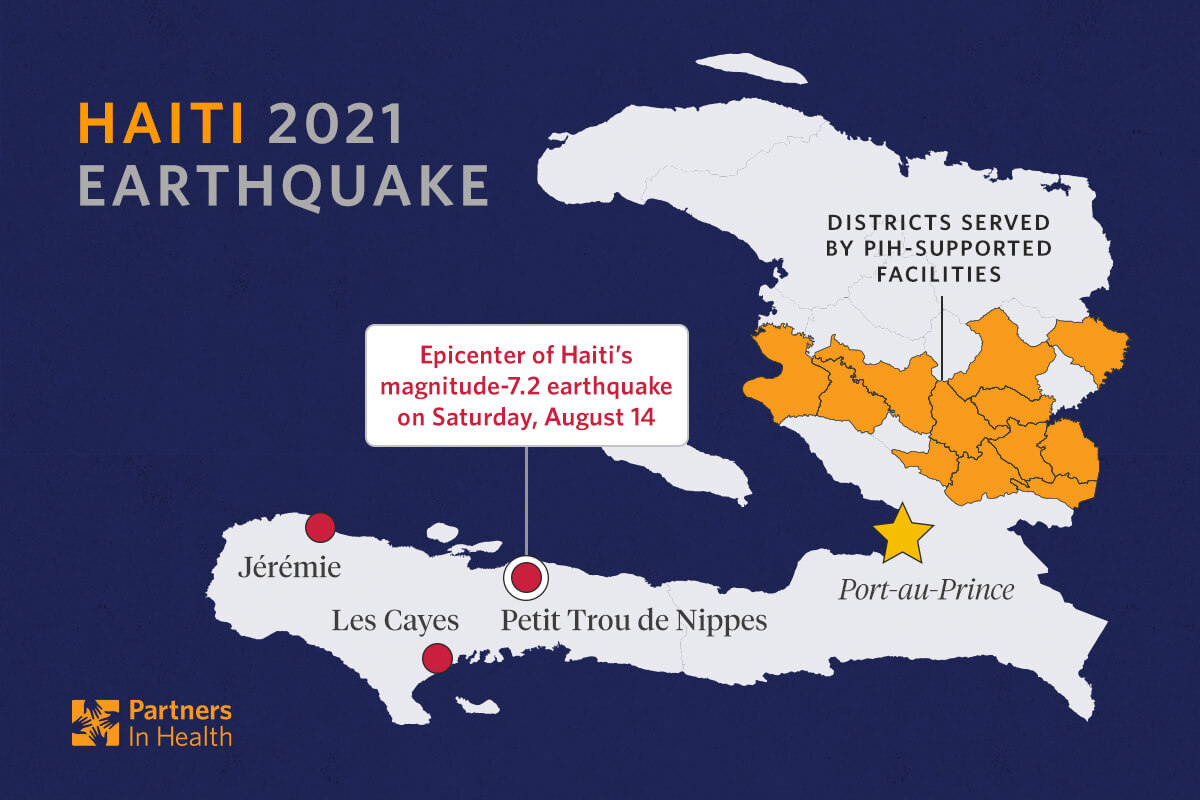 Another doctor involved in the response cited widespread structural damage, including to health centers.

“We are now in Jérémie, which is the main city of Grand’Anse, one of the departments that has been affected greatly,” he said. “We went to the south and to (Petit Trou) de Nippes, (a small town near the epicenter) and we found multiple health centers were completely collapsed.”

Clinicians said there is enormous need for staff, stuff, and space -- three of the five pillars of PIH’s model health system -- as overflowing facilities continue to receive patients with serious injuries and trauma.

The recently arrived Zanmi Lasante staff stand with all those affected this week. Padovany echoed that solidarity, and cited additional damage and impacts from Tropical Storm Grace just two days after the earthquake.

“It’s even more difficult in this time because of other weather-related issues,” he said. “So, if I have one message to the world, it is: We need your help.”

Our team is saving lives, working through the trauma of an earthquake, tropical storm, and COVID-19 in Haiti.