On the Frontlines of Malawi’s Food Crisis 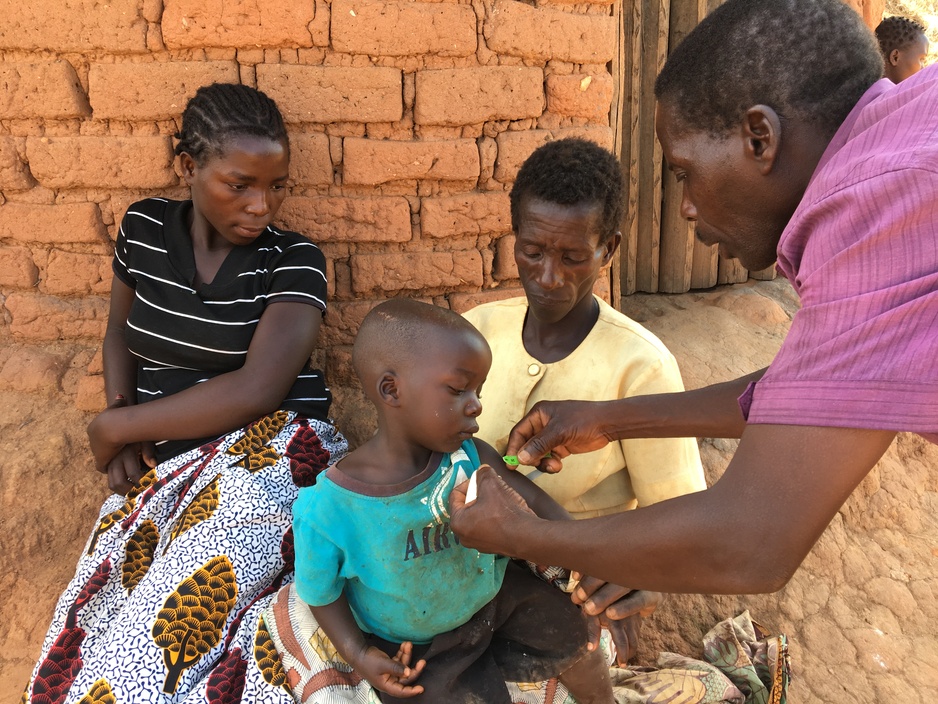 Silvester Dambe said that when he first began visiting Keredonia Wilfred, she was so weak that she declined medicine for her HIV, thinking her recent diagnosis meant she had no chance of living.

The senior community health worker gradually convinced her to stay on antiretroviral therapy, though, telling her that it was not the end of her life, and that he would keep visiting her to provide access to medicine and care through his role with Partners In Health in southern Malawi. Dambe reassured Wilfred that if she kept up with treatment, she would have an excellent chance of staying healthy, for a long time to come.

He’s still visiting Wilfred today, at her family’s home high in the mountains surrounding Dambe Health Center in Malawi’s Neno District. During his visits, he now gets to watch Wilfred, 55, play with her three grandchildren. She has maintained her antiretroviral therapy and managed her HIV, which is no longer the specter it once was for her.

Lately, as Dambe strides up the steep hills in Ndoma Village toward Wilfred’s home, his focus has been helping the family through a different health concern. Malnutrition is a serious threat now and in coming months for the 140,000 people whom PIH serves across Neno, where a food crisis looms as many continue to suffer from harvests lost during Cyclone Idai last March.

The cyclone pummeled southeastern Africa, killing an estimated 1,000 people across Mozambique, Zimbabwe, and Malawi; affecting 1 million; and destroying vital crops at the end of the rainy season, leaving farmers no opportunity to replant. In Malawi alone, the flooding killed 60 people and displaced nearly 90,000 across 15 of the country’s southern districts, including Neno.

The Malawi government recently estimated that 1.1 million people would not be able to meet their food requirements through March 2020, when new harvests finally should ease the burden.

Dambe is one of 96 community health workers (CHWs) on the front lines of the fight against malnutrition in the most mountainous, isolated part of Neno, with which he shares a name.

The 56-year-old has lived in the Dambe area all his life. He’s been a CHW since 2007, when PIH, known locally as Abwenzi Pa Za Umoyo, began partnering with the Malawi government and working in Neno.

In addition to supervisory roles as a senior CHW, Dambe regularly visits 15 homes, including Wilfred’s. As he arrived at her home for a scheduled visit one afternoon in October, she was seated outside with her daughters, 19-year-old Sofia Gerald and 20-year-old Lusca Gerald. In Sofia's lap was her 2-year-old son, Samuel Peter Gerald.

Dambe keeps a close eye on Samuel Peter during his visits, making sure the toddler is staying healthy in the critical early years of childhood development. After chatting with the family and going through basic health checkups, Dambe uses an adjustable armband to measure Samuel Peter’s mid-upper-arm circumference, or MUAC, a standard gauge for malnutrition. Anything less than 12.5 centimeters (about 5 inches) appears in a red zone on the armband, signaling high risk.

Samuel Peter’s upper arm measures 15 centimeters (about 6 inches) on this day, though, appearing in the green zone on the armband and indicating adequate health. It’s positive news for the family, which has faced challenges growing food since Wilfred’s husband passed away about three years ago.

But if problems arise, additional health services are not far away. Their home is atop a ridge, and Dambe Health Center is visible atop another ridge, across a valley. It’s about a 40-minute walk or a 10-minute drive away. The health center serves more than 11,400 people across 18 villages in the region, and offers malnutrition clinics every Thursday.

James Lipenga, CHW site supervisor for the Dambe region, said only eight children younger than 5 were enrolled in the malnutrition clinic as of early October—a significant drop from previous years, and a testament to the dedicated work of CHWs like Silvester Dambe.

PIH in Malawi has adopted a household model for CHWs, meaning every household has a CHW assigned to it, who visits regularly and provides access to care. Lipenga said that in the Dambe region, malnutrition care includes screenings and checkups, such as the MUAC measurement. CHWs' work is designed around early detection, referral, and treatment, to prevent severe malnutrition and provide families with access to services such as clinical needs and social support programs.

When malnutrition cases arise, CHWs help families and young children access the clinic and other services at the health center. For severe cases, PIH staff at the health center refer and transport families to the PIH-supported Neno District Hospital, about a two-hour drive down steep, rugged dirt roads to central Neno.

Across Neno District, PIH's malnutrition program provides monitoring and lifesaving treatment for more than 2,400 children under 5 per year, as of 2017 data.

It’s a ground-up, home-by-home system built on the foundation of CHWs, who provide vital, lifesaving care for their neighbors, in the communities where they live.

For Silvester Dambe, that used to mean a lot of walking. Before Dambe Health Center was built in 2016 and more CHWs joined the ranks, he served families in the large catchment area for Nsambe Health Center, as well as Dambe, requiring three-to-four-hour walks each way to reach homes. He covered that territory for nine years, including frequent visits to Wilfred, to enable her to maintain her HIV treatment and raise a family that continues to be healthy.

“That was how we developed a good relationship,” Dambe said, recalling long conversations about health, resources, and positivity.

The conversation on this particular day was warm, with the familiarity born of long friendships. As Dambe prepared to leave, with other visits on his schedule, their goodbyes were brief—he and Wilfred both knew Dambe would see her and her family again soon.