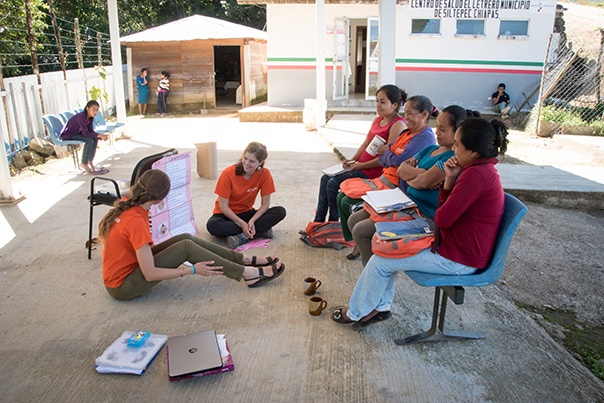 Dr. Rodrigo Bazúa didn’t have to think long to come up with examples of how new community health workers were making a difference throughout rural Chiapas, Mexico. There was Aracely in Letrero who, he believes, prevented a maternal death by convincing her neighbor to give birth at the hospital in Jaltenango. Then there’s Maribel in Plan de la Libertad, who helped get a patient’s diabetes and hypertension under control. And the list went on.

The women are among 33 new community health workers, or acompaňantes, recruited and trained over the past year to work in Letrero, Monterrey, Salvador Urbina, and Capitán. The expansion means that all 10 communities supported by Compaňeros En Salud, as Partners In Health is known locally, now have workers to support patients suffering from chronic illnesses, such as diabetes, hypertension, and depression. A select few focus on improving nutrition and maternal health.

“The relationships patients have with their doctor is short,” says Bazúa, a community programs coordinator for PIH in Mexico. “Control of chronic diseases is for the long term. It really depends on a strong relationship with the community health worker.”

PIH’s acompaňantes serve as bridges between the local clinic and the surrounding community. They are trusted neighbors who have been carefully recruited, trained, and supported by supervisors and local clinicians. They visit patients in their homes, interact with their families, and come to understand patients’ physical, emotional, and social situations—all of which come into play in maintaining good health. They become their patients’ strongest advocates and, quite often, their good friends.

Bazúa and Dr. Mariana Montaño, who shared the position of community programs coordinator up until March 2017, led the most recent expansion. After carefully examining the acompaňante program, they focused on elements that weren’t working perfectly, and coupled their analysis with a community health worker survey. The overarching lessons were that, before PIH recruited more workers, it needed to give supervisors fewer patients and provide them with better training and support.

The tasks that community health workers contribute are tasks that doctors simply cannot do.

The doctors designed a supervisor curriculum that focused on leadership, professionalism, and conflict resolution. The idea wasn’t to shame supervisors, but to understand what difficulties they faced and discuss how to overcome those obstacles.

Last spring, they began testing their new approach. Monterrey, one of the most remote villages from PIH’s base in Jaltenango, began recruiting and training new community health workers in April. Three months later, it was Salvador Urbina, then Letrero in September, and finally Capitán in January.

Staff spoke with pasantes, or first-year doctors supported by PIH, in each community to assess how many patients could use a community health worker. Typically, these patients suffer from diabetes, hypertension, alcohol abuse, depression, epilepsy, or schizophrenia. Nearly all need social support. But PIH also included on the list malnourished children and pregnant women, especially those considered at risk—such as teenagers or women with histories of complicated pregnancies.

Once they knew how many community health workers they had to recruit, the pasante and PIH staff hosted meetings in each village to explain the program. Attendees, mostly women, asked questions and decided whether it was a good idea for their community. Staff then interviewed volunteer candidates and made their final selections.

The recruits completed a four-week training, half of which focused on chronic disease and the other half on mental health. Veteran community health workers helped conduct these trainings, another PIH first, and were on hand to answer questions. “This has been an enriching experience for both sides,” says Montaño. “It represents a unique opportunity for social connection.”

Once training was complete, pasantes paired workers with patients. The relationships are far from obligatory; patients have the final say about whether they need, and want, such assistance. Usually, they do. Still, PIH staff say, it can be awkward convincing an octogenarian, who may have known a community health worker from the time she was in diapers, to entrust her health and well-being to someone without a medical degree. Over time and repeated visits, trust builds between the two.

Workers visit new patients once a week for six months to ensure they are taking their medication and have their sugar levels or blood pressure under control. That frequency changes over time, depending on the patient’s health. Meanwhile, PIH staff closely supervise the recruits, dropping by the community for several days each month to provide guidance and “follow them like a shadow,” Bazúa says. Program staff also conduct monthly trainings to continue the workers’ education and provide a forum to troubleshoot difficult cases.

Bazúa and Montaño say it has been difficult to determine whether workers provide “successful” home visits. They are now developing ways to measure that qualitatively and collect data on basic services provided with each visit. Whatever they discover will help inform how PIH can further improve and expand the program.