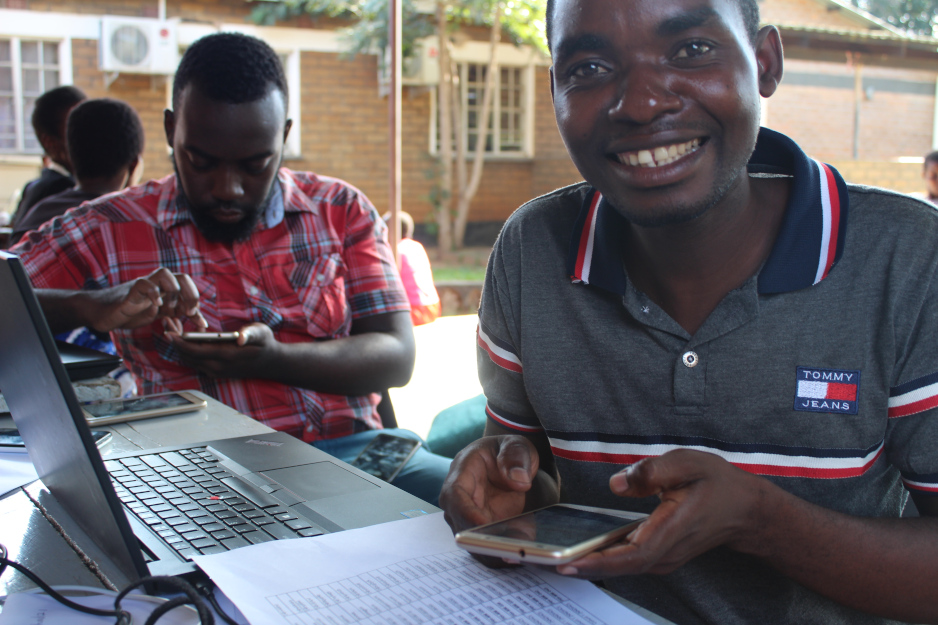 As Doctor Kazinga awaited the results of his final exams for the University of Malawi-Polytechnic in December, more than his own graduation was at stake.

Kazinga, 28, was hoping to achieve a new milestone for the people he loves most.

“No one had ever gone to university in my family,” said Kazinga, who grew up in Malawi’s Neno District, a rural, mountainous region where poverty is endemic and educational opportunities are slim.

Kazinga had no need to worry about his grades. He passed the finals and, in March, graduated from the university with a bachelor’s degree in mathematical sciences, a field he has loved since high school. He focused on statistics, and minored in computer applications and programming.

The youngest of seven, he is the first in his family to complete university studies. That’s fitting given his first name, Doctor, which is not to be confused with the title of Dr.—at least not yet, anyway.

Kazinga also is the first university graduate in Malawi who benefited from the Partners In Health program known as POSER, or the Program on Social and Economic Rights.

PIH is known in Malawi as Abwenzi Pa Za Umoyo, and provides POSER support to more than 100 families in Neno District. That support includes food packages, new home construction, emergency home repairs, and funding for education, transportation, and helping people launch small businesses. The goal is to provide long-term investments in community members, giving them support beyond health care, to help them break out of the cycle of poverty and lead more productive, healthy lives.

Kazinga and his family are well-known to the POSER team in Neno. He grew up in Mpakati Village, about an hour and a half by foot from the PIH office in Neno’s central community.

Initially, his studies at Mwanza Secondary School—nearly 40 miles from his family’s home, in a neighboring district—were supported by the government’s local Office of Social Affairs. During his junior year, funding issues caused an abrupt end to that support. Kazinga had no choice but to leave the school, even though he was only one year away from graduation.

He was spending a few weeks back at his family’s home in Neno when a POSER staff member visited, because of his mother’s poor health. During that visit, the staff member identified Kazinga as a highly driven student, and PIH began paying for his school fees, books, and other materials so that he could continue his education. Then, once he’d obtained his high school diploma, Kazinga attended university in Blantyre, Malawi’s capital, through PIH’s support.

“If POSER hadn’t helped, I would have been done with my studies, because there was no money for school fees,” Kazinga said. “Had it been that they didn’t intervene, I cannot imagine what would have happened. It’s too much.”

Victor Kanyema, POSER manager for PIH in Malawi, said Kazinga is an exceptional young man who always has been hardworking and reliable.

“I am so proud of all that he has achieved,” Kanyema said. “When he was accepted into university, we worked closely with the PIH staff in Boston to figure out how POSER could continue to support him, despite financial restraints, and make sure he could continue to go to school. We did everything we could to mobilize resources and help with fees, transportation, accommodation, and other basic necessities.”

Kanyema joined Kazinga, and Kazinga’s father, for the university graduation in March.

“He has been so committed, right through the end of his studies. Something we originally thought may not be possible, we made possible. He is a pioneer,” Kanyema said. “Because of him, another POSER recipient is able to pursue her university studies right now, following in his footsteps. He is making all of us at POSER—and APZU —very proud.”

Kazinga was one of 42 students in the university’s mathematical sciences department, but only 18 of them graduated, reflecting the challenges many students and families face when it comes to paying for education.

Down the road, Kazinga dreams of pursuing a master’s degree in statistics and being involved with research.

He already has a head start in that direction. Kazinga is an intern with PIH’s community health department in Neno, supporting all of the department’s programming, including POSER. He’s using many of the skills that he learned throughout his education to support other people and families across Neno, embodying the POSER spirit of investing in people, so that they can invest in their communities.