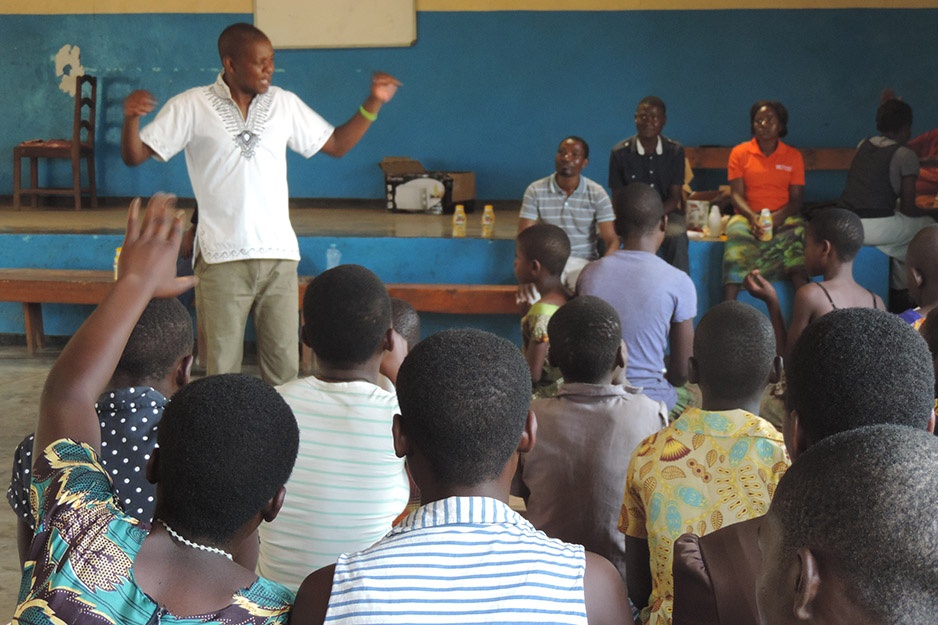 At school, Promise says, none of her friends know about her HIV status.

“No one talks about it,” she adds, shrugging her shoulders while sitting on the edge of a stage in a large community hall in Neno District, Malawi.

Promise’s somber expression implies that talking about HIV is just not done at her school. That kind of silence can be found across the East African nation, where nearly 10 percent of adults are living with HIV and social stigmas run deep.

Silence likely doesn’t come easily for Promise, who laughs and interacts enthusiastically with other teens running around the hall. The friendly, outgoing 17-year-old lives with her grandmother in a nearby village, lists math and English as her favorite subjects and hopes to work in a bank one day. Moving her hands like she’s riffling through a stack of bills, she jokes that she gets inspired when she sees tellers counting money.

She was diagnosed with HIV at age 7 and has been dedicated to antiretroviral therapy, or ART, for several years. She gives Promise as a pseudonym, in a region where discrimination is common.

But on this Saturday afternoon, at a Teen HIV Club event near the Partners In Health-supported Ligowe Health Center, she was more than able to talk freely with peers about her condition, her treatment, her community involvement, and more.

Because at Teen HIV Club, everyone talks about it—that’s the point.

“As manager of the program, your health is my responsibility,” Dr. Dimitri Suffrin, HIV and TB program manager for PIH in Malawi, tells the 48 teens attending today’s event. “Any problem that you have, I am here to listen and find a way to help you.”

The teens stand in a circle as Suffrin speaks, part of introductions and songs before activities begin. Chisomo Kanyenda, an HIV program officer for PIH, translates Suffrin’s remarks into local Chichewa. PIH is known in Malawi by a Chichewa name, Abwenzi Pa Za Umoyo.

PIH, Malawi’s Ministry of Health, and like-minded groups such as the We Care Youth Organization—whose Peer Power project is working to raise HIV education and awareness in Malawi—organize the regular Saturday events for teens living with HIV. They offer Teen Club in five locations across Neno and work with more than 200 children and young adults, most of them 10 to 19 years old.

The program is part of a growing HIV program that is turning the tide in Neno District. PIH has nearly 8,000 people enrolled in HIV treatment in Neno. That number equates to 90 percent of all adults living with HIV in the district—a benchmark goal set by the World Health Organization. Moreover, about 86 percent of people in the HIV program have suppressed viral loads, meaning treatment is working and impacts of the virus are greatly reduced.

But only about 50 percent of Neno teens have suppressed viral loads, creating a need for more education about the importance of adhering to treatment.

Reaching youth through Teen Club is intended to meet that need and bring effective treatment much closer to 100 percent for youth—even in the most remote areas of Neno, where dirt roads wind over boulders and up steep mountain slopes, where electricity and water supplies can be unreliable, and where food scarcity is an epidemic in hot summer months, if not year-round.

Teen Club also can be a respite from those challenges, and a place where kids can just be kids.

"I strongly believe that being a teenager is difficult," Suffrin noted. "With HIV, it's even worse."

Participants find friendship, games, snacks, HIV education and, most importantly, support—from their peers and from adult mentors, clinicians and educators, some of whom are living with HIV themselves.

One of those mentors is Ministry of Health teen coordinator Gertrude Daluni, who has been HIV-positive since 2002 and on antiretroviral therapy, or ART, since 2004.

Daluni greets nearly every teen who walks in the door. Her booming voice, friendly laughter and boisterous demeanor would be instantly recognizable to anyone who has attended a summer camp—her smiling presence fills the spacious community hall. Kids run up to Daluni for hugs, while sunlight streams in large windows and other kids jump rope or play keep-away with a basketball, running and sliding on the cement floor before the programming starts.

Later in the afternoon, Daluni bounced that basketball loudly while standing in the middle of the teens, again gathered in a circle. She asked questions about ART, viral loads, nutrition and more—punctuating each question with the “BAM” of a dribble—and tossed the ball to teens whom she wanted to give answers.

Teen educator Kenneth Mangani also led the group in several games, including a call-and-response activity similar to “Simon Says.” If teens misheard quickly changing instructions and moved the wrong way, they were out, eliciting rowdy yells every time.

Lessons are interlaced with the laughter. Mphatso Chimangeni, a teen educator with the Peer Power project, organized a short skit in which she and some of the older teens played roles to show how different treatment levels affected viral loads. Even that activity took on a light-hearted note, as Chimangeni, playing HIV, theatrically tumbled to the ground in defeat.

“We play a lot of games and things like that, so the knowledge is instilled,” PIH teen coordinator Wedson Khoviwa said.

One of the best ways to retain knowledge is to hear it from peers. And at today’s Teen Club, the most senior peer is 23-year-old Caroline Kapalamura. She’s been coming to the events for about five years, after an HIV-positive diagnosis at age 13. While nearly every youth at Teen Club—including Promise—contracted HIV from their parents, Caroline is an exception. She got the virus from a boyfriend who didn’t tell her about his HIV status.

Kapalamura said she struggled with weakness and fatigue for a long time, without understanding what was wrong. She thought that maybe she had malaria. She eventually visited PIH-supported Neno District Hospital, explained her symptoms and got tested. She began ART in 2015. Grace Nyambi, a senior clerk at the hospital’s integrated chronic care clinic, told her about Teen Club.

“My health has been much better since I have been on treatment. I feel very strong,” said Kapalamura, who is studying to become a nurse. “My favorite part of Teen Club is teaching, and doing outreach.”

Outreach to find new members is one of the most invaluable aspects of the program. Nyambi, the hospital clerk, introduced Promise to Teen Club, too, in 2012. Promise has been attending events regularly since then.

“She is very active,” Khoviwa said. “Ever since she joined Teen Club, she has been here every time.”

Promise now joins Khoviwa on outreach visits, encouraging other teens to come to events. She also advocates within Teen Club for more funding, more resources and more connections with other clubs, in Neno District and throughout Malawi.

Turns out, Promise has a knack for it—and is a strong, outspoken voice in efforts to decrease stigma and fully support her peers with HIV.

“Five other teens have joined because of her,” Khoviwa said.