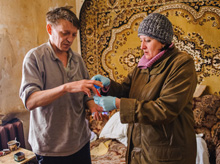 The Sputnik Initiative: Patient-Centered Accompaniment for Tuberculosis in Russia

The Russian Federation has one of the highest rates of tuberculosis (TB) and multidrug-resistant tuberculosis (MDR-TB) in the world. Partners In Health (PIH) has been working on TB and MDR-TB in Russia since 1998. In 2006, PIH and Tomsk Oblast Tuberculosis Services launched a new project, the “Sputnik” Initiative, a model of patient-centered accompaniment in Tomsk Oblast, Russia, focused on providing daily comprehensive care to patients at the greatest risk of defaulting from treatment. These patients included those who had been discharged from hospitals due to behavioral challenges, struggled with alcoholism and substance abuse, or faced socioeconomic problems. Prior to Sputnik, successfully treating such patients had been commonly viewed as impossible. Sputnik’s task was to shift the onus of responsibility for adherence from the patient onto the program team.

The program has been a success. Since the 2006 launch of the Sputnik initiative in Tomsk, the incidence of TB, the prevalence of drug-resistant cases, and TB mortality have all significantly declined. The program’s treatment success rate for patients with MDR-TB was 71.1%, a major accomplishment for patients who otherwise were unlikely to have finished treatment. Sputnik shows that 1) treatment of vulnerable patients with social and behavioral challenges is possible with comprehensive social and psychological support during the entire course of therapy and 2) community-based patient-centered accompaniment is a worthwhile alternative to hospitalization, which is often associated with high risk of nosocomial infection transmission and is more expensive than the accompaniment model of care.

PIH Reports
PIH Reports presents issues related to public health program implementation in resource-limited settings. They are intended to complement traditional academic publishing by sharing evidence and knowledge from the field that may not fit the constraints of peer-reviewed literature. The intended audience for PIH Reports includes health providers, implementers, donors, and policymakers.