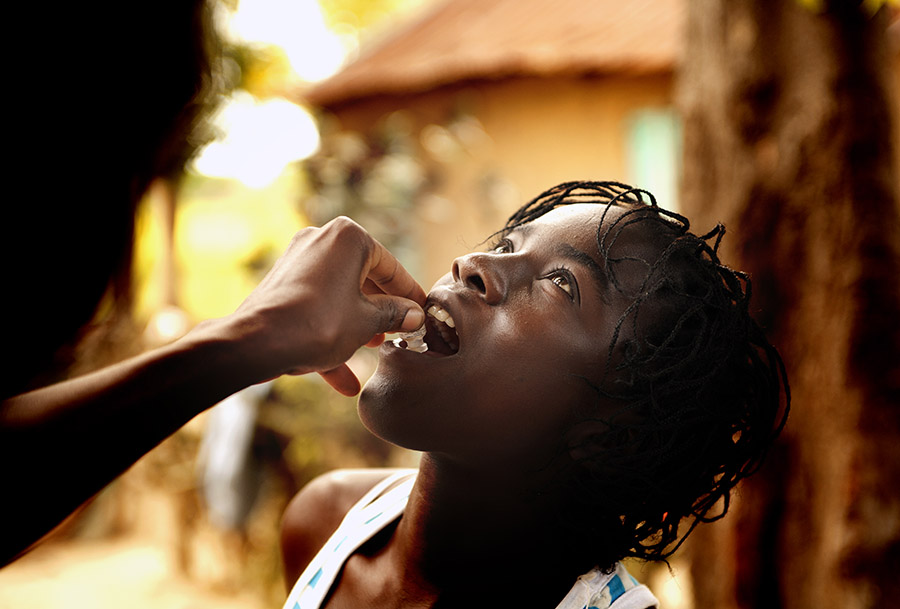 A child receives the oral cholera vaccine Shanchol, which was distributed in the Artibonite Valley region of Haiti between March and June 2012.
Photo: Jon Lascher / Partners In Health

Cholera is a diarrheal illness caused by drinking water or eating food from sources that have been contaminated with the bacterium Vibrio cholerae. It is found and spread in places where people have inadequate or no access to sanitation and clean water.

People infected with cholera develop watery diarrhea, vomiting, and leg cramps. They can become dehydrated rapidly, go into shock, and die within 24 hours if they don’t receive care.

Cholera had never been reported in Haiti or on the island of Hispaniola until the outbreak of October 2010. The disease struck at a particularly vulnerable time, following on the heels of the January 2010 earthquake that displaced millions and further weakened the nation's insufficient water and sanitation infrastructure. Thousands of Haitians were living in temporary camps where sanitation was poor or non-existent, so the disease quickly spread from one settlement to the next.

Now, several years after the earthquake, Haitians are still plagued by an epidemic that flairs up with heavy rains and tropical storms, triggering spikes in cholera cases and deaths. The outbreak has now killed more than 10,000 people, sickened hundreds of thousands, and become one of the world’s largest in recent history.

Our staff was among the first to see cases of cholera in the Central Plateau. We opened 11 cholera treatment facilities and hired and trained more than 3,300 community health workers, who identified and treated cases of cholera and ran public hygiene education campaigns. Our mental health teams also counseled and conducted memorial services for many families, who either lost loved ones or suffered from the stigma associated with the disease. So far, we’ve treated more than 145,000 patients.

Working with the Ministry of Health in 2012, we vaccinated approximately 50,000 people against cholera. Our community health workers delivered the required two doses of the vaccine to 91 percent of participants—an outstanding completion rate.

Based in large part on a review of our collaborative project, the Pan American Health Organization issued a recommendation to make the cholera vaccine universally available in Hispaniola.

Prevention of infection is key to abolishing cholera from Haiti. We began a water, sanitation, and hygiene program in January 2014 that promotes handwashing and the use of latrines. We also support the construction and rehabilitation of water and sanitation infrastructure at our clinics, hospitals, and schools. Improving these systems will reduce not just cholera but other waterborne diseases.