All photos by Karin Schermbrucker/Slingshot Media for PIH
Kerefasi Wiliyamu, 14, took a winding road through several health facilities before finding what was causing his fevers and stomachaches. Earlier this year, he received a diagnosis of diabetes at PIH's Advanced Non-Communicable Disease Clinic in Neno District, Malawi. He now visits the clinic regularly with his mother, Sofiya Simoni, to receive personal, specialized care and insulin, enabling him to return his focus to his studies, instead of his health.

Sofiya Simoni said it took a lot of legwork to figure out why her son Kerefasi was suffering from fevers, stomachaches, and vomiting.

Now 14 and in sixth grade, Kerefasi Wiliyamu began feeling those symptoms several years ago. He and his mother live in Masinde Village in southern Malawi, near the commercial city of Blantyre. The closest health center to their home is a facility named Mdeka, but when Simoni took Kerefasi there for tests, clinicians found no disease. Neither did staff at a private clinic they tried next.

But when they visited Partners In Health-supported Zalewa Health Center—where tests again showed no malaria, no HIV—they were referred to Lisungwi Community Hospital, also PIH-supported. Simoni and her son had finally found a place that could answer their questions: PIH’s Advanced NCD Clinic.

The clinic is held weekly at the hospital and provides specialized, personal care for children and adults with advanced cases of non-communicable diseases, or NCDs, ranging from type 1 diabetes, sickle cell, heart problems and kidney failure to severe asthma, epilepsy, and more.

For Kerefasi, the condition that had been keeping him out of school and significantly affecting his health was one that, in countries like the United States, would be much easier to diagnose: type 1 diabetes. But in Malawi’s rural, remote Neno District, accessing proper treatment and medicine for an NCD like type 1 diabetes can be challenging—which makes the specialized care that Kerefasi is now receiving all the more remarkable. 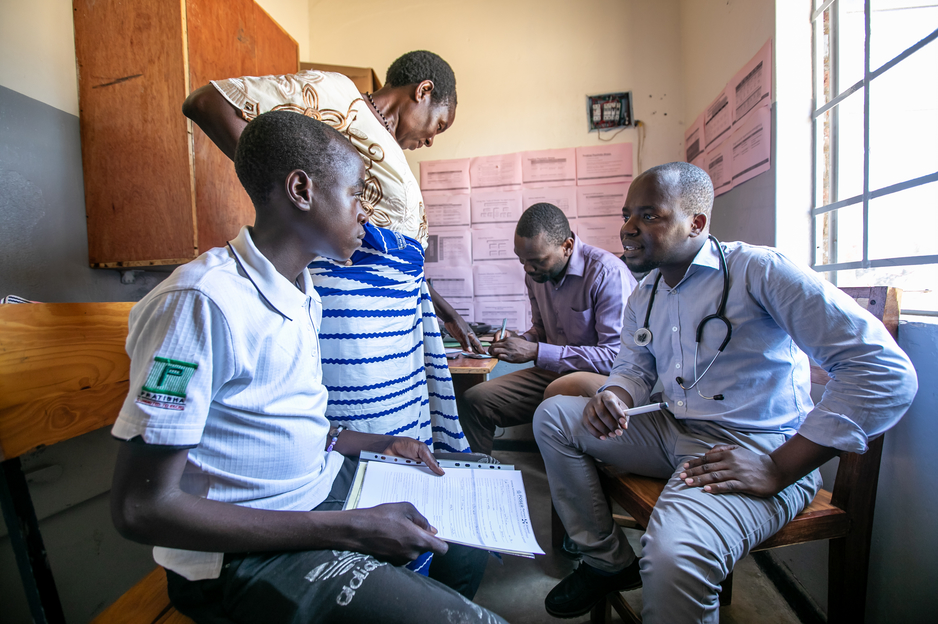 PIH, known in Malawi as Abwenzi Pa Za Umoyo, started the Advanced NCD Clinic at Lisungwi in November 2018. PIH also offers the clinic weekly at Neno District Hospital and monthly at Matope Health Center, to reach as many as possible of the 140,000 people PIH serves across Neno’s rugged mountains and lowlands.

“It was established because, initially, we only had IC3, which is Integrated Chronic Care Clinic, where we see NCD plus HIV (clients) together,” Kumwenda said. “But it was noted that there are some clients who are very sick, and they need advanced care. Because in IC3, for example, we can't do ultrasounds or other advanced things like electrocardiograms,” or closely monitor and adjust insulin for children with type 1 diabetes.

On a hot, dry Thursday in October, Kerefasi and his mother made their third visit to the Advanced NCD Clinic. They first received a general checkup and consultation, as Kumwenda and clinical officer Medson Boti checked his vital signs and chatted with Kerefasi about how he had been feeling lately.

Kerefasi and his mother said he was feeling good, much better than he’d been for some time, but a problem remained. Despite the insulin he’d been receiving at the clinic, his blood sugar levels weren’t dropping.

Kumwenda later said that was because Kerefasi wasn’t getting as many meals as he needed, and skipping his insulin because of weakness he would feel after taking the medicine on an empty stomach.

Food insecurity is all too common in Neno District, and the community around Lisungwi.

“This is a rural community, and most of the people, they are poor, and they cannot afford the diabetic diet we advise, meaning three regular meals a day," Kumwenda said. “Most of them, they maybe afford one, and eat one meal per day, or two. So with diabetes, on insulin, that's a very big challenge. So they may end up opting not to give the insulin. Instead, they say, ‘I will give it when I have food.’”

Taking insulin without eating can lead to dangerously low drops in blood sugar for people with diabetes. That compounds existing problems of malnutrition that, for many people in Malawi, will be especially dire in the months ahead.

Last March, Cyclone Idai struck southeastern Africa and massively exacerbated an already heavy rainy season. The cyclone killed an estimated 1,000 people across Mozambique, Zimbabwe, and Malawi; affected 1 million; and forced hundreds of thousands from their homes. In Malawi alone, the flooding killed 60 people and displaced nearly 90,000 others across 15 of the country’s southern districts, including Neno.

Relief efforts have been ongoing, but the needs remain great. The Malawi government’s annual food security report, released in September, estimated that 1.1 million people across the country will not be able to meet their food requirements from October through March 2020, when new harvests finally will ease the burdens.

Kumwenda said Kerefasi and his family could be a candidate for additional food support from PIH, through its Program on Social and Economic Rights, or POSER. The Advanced NCD Clinic provides POSER support to many of its patients, usually through cash for transportation costs, furthering PIH’s belief that social assistance is a critical part of medical care.

Kumwenda said some patients travel more than 60 miles, each way, to reach the clinic.

Simoni said she and Kerefasi had left their home at 6 a.m. that day, to reach the clinic by about 8 a.m. They took a bus part of the way, she said, and happened to catch a passing hospital vehicle that gave them a lift. Had they not caught that vehicle, they would have continued on the transportation regularly paid for by PIH.

The ride was welcome on a hot day. October heat can be brutal in Neno, particularly in the lowland Lisungwi community, which doesn’t have the cooler mountain air found in the district’s higher elevations. On this Thursday, temperatures at Lisungwi topped 38 degrees Celsius, or about 100 degrees Fahrenheit.

Despite all of those challenges—heat, distance, food insecurity, and failed diagnoses at several facilities—Kerefasi, finally, is feeling better. He said his favorite subject in school is English, and he likes to read, especially poetry. Simoni said they’d return to the clinic the following week, to keep more frequent checkups to monitor Kerefasi’s blood sugar.

Kumwenda said that kind of improvement is his favorite thing about the Advanced NCD Clinic.

“You know, in Malawi, when you talk of type 1 diabetes, everyone will say: ‘Who is going to manage this?’” Kumwenda said. “Even heart failures. Even chronic kidney disease—they are difficult to manage here.”

Kumwenda, Boti, and all of PIH’s team in Malawi are steadily putting those doubts to rest.

“What I most like most (is that) most of the patients, now, since we started, we are helping them,” Kumwenda said. “They are stable. They are going home, they are happy. They come here (and say), ‘I am fine now, I am able to walk.’ So I think this is very interesting to me.”