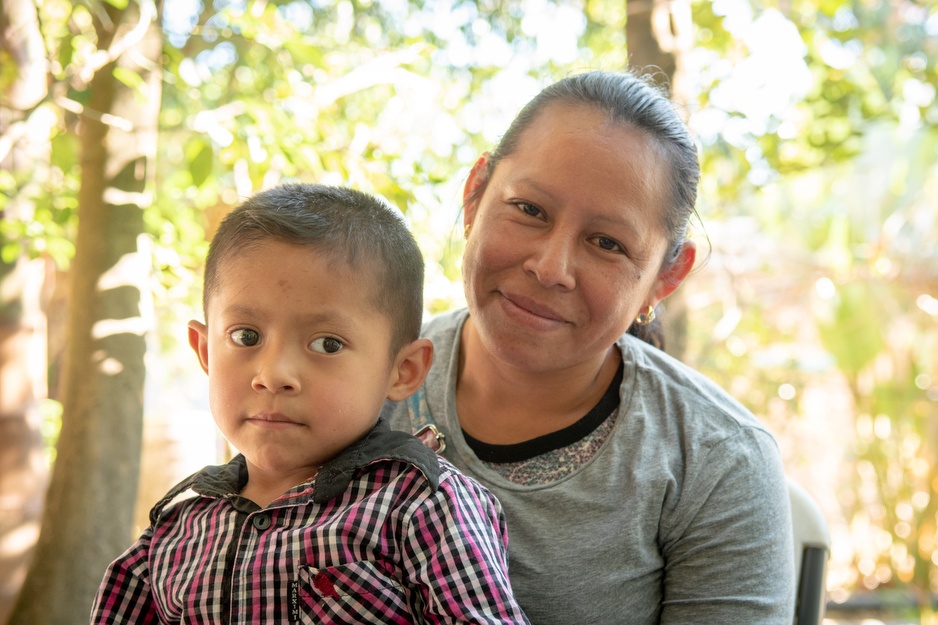 All photos by Mary Schaad/PIH
Florinda Roblero holds her son, Ernesto, who now is 4 years old and seeing clearly after successful cataract surgeries, which he received with extensive support from PIH in Mexico and its Right to Health Care program.

Well before his second birthday, Ernesto Roblero’s parents began seeing signs that their infant son was struggling with significant difficulties. But they didn’t know the cause.

Some people in their rural community of Toquiancito, in the southern Mexico state of Chiapas, may have thought it was simply shyness, seeing that Ernesto was reluctant to venture far from his mother, Florinda Roblero. But when he did walk on his own, he would often trip or bump into things—more so than usual for a 1-year-old, his parents thought. Other times, he would come to tears if he wanted something, even when the things he needed were already within reach.

“He was crying a lot,” Florinda said. “I was holding him almost all the time, because if I put him down on the floor, he wouldn’t walk; he would just start to cry.”

“Because he was afraid,” Ernesto’s father, Oscar Roblero, added.

“He was afraid,” Florinda agreed.

The family’s closest option for medical care, then and now, is a clinic an hour’s walk from their community, staffed only part-time by a nurse. As is often the case with public clinics in this marginalized region of Chiapas, there is no doctor. Although travel would be difficult and require money that they had little of, the family made arrangements for the trip to Tapachula, a city some four hours from their home.

There, a doctor gave them the news: Their 1-year-old son had cataracts, in both eyes. What’s more, they were told that the surgeries Ernesto needed would cost 70,000 Mexican pesos, or nearly $3,600.

“They were charging 70,000 pesos, and we have no money,” Florinda said. “My husband plants his corn crop and beans. That’s all that we grow here. There is nothing more.”

Weakened harvests due to climate change, as well as other factors—including the deaths of Oscar’s parents, within six months of each other—together with ingrained, systemic inequity, all meant that affordable and adequate health care simply hadn’t been within the family’s reach, or means. When they were faced with Ernesto’s condition, they knew they needed help.

Situations like theirs are exactly why Partners In Health—known locally as Compañeros En Salud—is collaborating with Mexico’s Ministry of Health on an innovative partnership to ensure access to quality medical care for families in impoverished communities in Chiapas. PIH works with the ministry to support health care at 10 clinics in remote areas, serving more than 140 communities in rural Chiapas. Primary care often is provided by first-year physicians carrying out their social service year, known as pasantes, whom PIH recruits by partnering with medical schools in Mexico.

Dr. Valeria Macías, director of secondary and tertiary care for PIH in Mexico, was among the first to carry out her pasantía with Compañeros En Salud, which began its work by establishing a strong primary care program in these clinics.

“When I was a pasante, we had everything for primary care. Sadly, for some patients, this isn’t enough. Some conditions are complicated, and a rural clinic, however well-equipped, is not enough,” she said. “We started seeing a huge need for surgeries, cancer treatments, and other specialized care that we could not provide. We saw patients with conditions that they had been suffering from for years or decades without any relief, because they couldn’t access care. The burden was overwhelming.”

As a result, PIH in Mexico decided to create a referral program to serve as a link between local health centers and government hospitals. The Right to Health Care program is dedicated to helping patients navigate the health care system and find all available resources, while addressing the barriers—such as arranging and paying for transportation and lodging—that patients face when trying to access care and alleviate their suffering.

“Wouldn’t we want the same for ourselves and our families?” asked Macías, who became the first coordinator of the Right to Health Care program, following her social service year. Since its inception in 2013, the program has accompanied more than 1,000 patients in accessing life-altering specialized care.

Ernesto’s family connected with the program through a fortunate encounter in a neighboring community.

“We went to ask for some help and there was a man working who told us, ‘Why not go over there [to a clinic in La Soledad]?’” Oscar said, referring to one of the PIH-supported clinics in the region.

Oscar said the man described how health care providers at the clinic had successfully cured several people he knew.

“And because of that, we took the boy to La Soledad,” Oscar said.

The family traveled more than an hour and a half to arrive at the community clinic in La Soledad, a small community not so different from their own. The visit opened a new world of possibility to them. There, Ernesto’s family met with Dr. Montserrat Quesada, a PIH pasante. The doctor wasted no time in referring Ernesto to the Right to Health Care program, which would accompany him to the Pediatric Specialty Hospital in Tuxtla Gutiérrez, the state capital of Chiapas.

Ernesto would come to know the hospital well. The family made several trips, for a series of medical tests and consultations to evaluate Ernesto’s condition and plan his treatment. Each consultation required lengthy travel. From their home, the family would take several modes of public transportation, over several hours, to reach Jaltenango, where they would stay overnight at the headquarters for PIH in Mexico. The next day they would make the three-hour trip to the hospital in Tuxtla Gutiérrez, accompanied by members of the Right to Health Care team.

The trips paid off. Doctors, the family, and PIH staff reached a decision: Ernesto would have surgery in both eyes, one at a time.

Carrying out the surgeries proved to be a challenge. Over several months, numerous factors intervened to push his surgery dates back. The first time, Ernesto fell ill. Then his grandmother passed away, and the date needed to be moved again. Then, in August 2017, they made the trip to Tuxtla for the scheduled surgery, only for hospital staff to discover that they lacked a necessary piece of equipment. Ernesto was discharged and the family made the long trip home, his vision still clouded by the cataracts. Hospital staff asked the PIH team to be in touch in three weeks, to reschedule.

Three weeks later, a magnitude-8.1 earthquake struck just off the coast of Chiapas.

Public facilities, such as schools and hospitals, were closed for inspection to assess possible damage. Hospital administrators made a plan to reschedule disrupted appointments and procedures to dates in the following year—at least four months out.

Without an advocate, a patient like Ernesto—living far away in a remote, marginalized area—was at risk of falling through the cracks during an emergency situation that the overburdened public health system was ill-equipped to handle. Thankfully, he had an advocate in PIH.

After the earthquake, Dr. Francisco “Paco” Rodríguez, then coordinator of the Right to Health Care program, and Miriam Morales, a PIH social worker, went to work advocating for Ernesto. Through the team’s efforts, Ernesto’s two surgeries were rescheduled, and then carried out successfully by year’s end.

Morales emphasized that the entire team was involved in Ernesto’s case.

“We always made sure that one of us from the Right to Health Care team was there with Ernesto and his parents,” she said. “This is a team. Not only our medical staff, but also our logistics staff, know how to navigate the health care system really well and are able to resolve any problem that comes up in the moment, whenever the patient needs it. Accompaniment is a priority in our Right to Health Care program. It was essential so that Ernesto’s treatment was carried out.

“Personally, for me, there is no greater satisfaction than seeing all that was accomplished for Ernesto,” Morales added. “I’m really happy for Ernesto and his parents.”

PIH’s advocacy for the family has continued.

Rodríguez has accompanied them to appointments at the pediatric hospital following Ernesto’s surgeries. He has seen patients through a lot, noting the impact of the adversity they must overcome, as well as the impact that the program has in helping them do so. He watched Ernest playing quietly by himself as they waited outside the ophthalmologist’s office for a follow-up appointment.

“I think that, due to his condition, Ernesto has developed his own vivid inner world,” Rodríguez observed. “As well as a strong sense of resilience.”

When Ernesto’s name was called in the waiting area, Rodríguez accompanied him as he sat to have his eyes examined, facing bright lights in a dark room. The ophthalmologist, Dr. Alma Leticia González Calderón, decided to give laser treatment for the boy’s posterior capsule opacification, a common follow-up for cataract surgeries, and said she was otherwise pleased with his recovery.

Ernesto quietly tolerated drops in his eyes to prepare him for the laser procedure, followed by another period of waiting and kneeling for the device’s chin platform to be adjusted. With the help of his father and Rodríguez, Ernesto stayed very still as González expertly and patiently orchestrated the lasers, directed with precision at certain points in his eyes.

During a recent visit to the family’s home following the laser procedure, Ernesto’s parents offered agua de carambola—a drink made with star fruit—as well as their gratitude.

“Thanks to Dr. Paco and God, because he helped us,” Florinda said. “Miriam really helped us a lot, as well.”

Ernesto and his older brother, Abimael, were nearby, playing outside.

“He goes out all the time, up and down. He’s all the time seeing little things. If he sees a little red bottle cap, he goes and picks it up, running,” she laughs. “Thank God that now he sees.”

Arriving to this point with her son has been a long road for the family, and there is more that lies ahead. Florinda worries about how Ernesto, now 4, will do in school. But she also has the support and encouragement of the team, who she says have told her how important it is that he go to school when the time comes. She appreciates the accompaniment as they continue on this path.

“We’re really grateful to all of you,” she said. ”Because just one person, alone, isn’t able to do anything.”