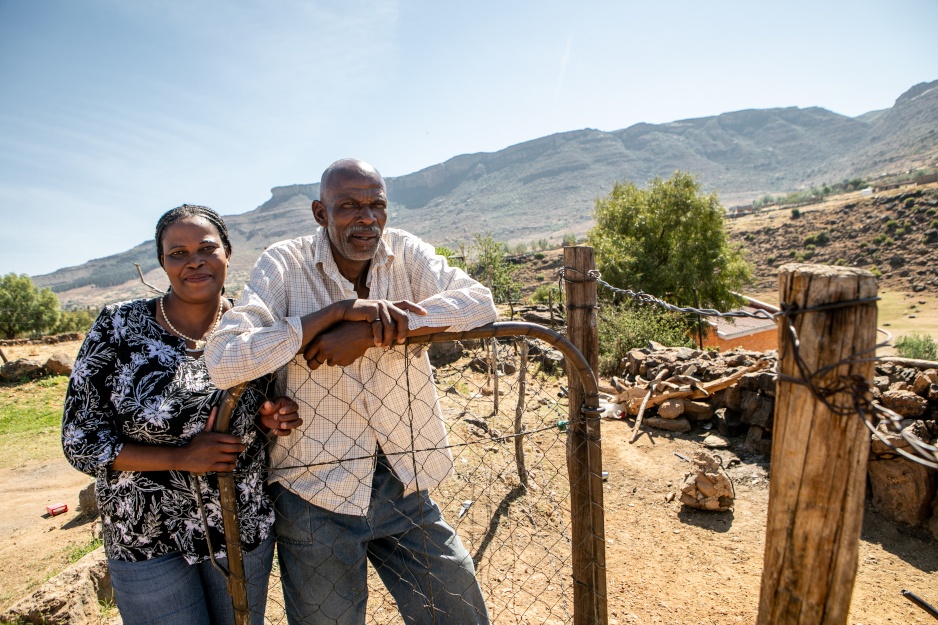 Photos by Karin Schermbrucker for Partners In Health
Tseleng Matsuma and her father, Moholi Moleko, are both TB survivors and stand outside their home in Ha Rasekoai, Lesotho.

When Matankiso and Moholi Moleko learned in 2018 that three members of their family—two of their daughters and one granddaughter—had been diagnosed with a severe form of tuberculosis, they were devastated.

They had been down that road too many times before.

Over the span of several years in the early 2000s, the parents lost three of their 10 children to TB, the world's deadliest infectious disease.

As Matankiso, 62, talked about those years, her face grew somber. She sat in the kitchen next to Moholi, her husband since 1974. Their family's home is in the village of Ha Rasekoai, Lesotho, in a rural, arid region ringed by mountains and more than two hours by car from the capital, Maseru.

Moholi, now 69, had personal battles with TB himself, catching and overcoming the airborne disease three times as a younger adult, while working in mines in South Africa.

All of that history meant the 2018 diagnoses, one after another, struck the family incredibly hard.

But only a year later, on that day sitting at their kitchen table in October 2019, Matankiso and Moholi were able to smile. This time, the results have been much, much better.

With the support of Partners In Health-Lesotho, all three family members diagnosed in 2018 are now healthy and in recovery. They received treatment at PIH-supported Botšabelo Hospital, the only facility in the country dedicated to multidrug-resistant tuberculosis (MDR-TB), a severe strain of the disease.

Additionally, all three family members have benefited from new TB medications, which PIH-Lesotho is using as part of the #endTB partnership and have shown positive results in clinical trials across several countries.

For Pulane Matsuma, 14, the new medications have meant nothing less than a new outlook on life. The engaging, outspoken Pulane said she "was very, very scared" in June 2018, when she was diagnosed with MDR-TB.

Shortly after her diagnosis, Pulane spent a week at the PIH-supported Malaeneng treatment center in Maseru, not far from Botšabelo Hospital. Malaeneng provides housing for patients receiving extended care, who live far from the capital. Pulane began taking MDR-TB medicines orally, twice a day. While she lost her appetite and battled a persistent cough, symptoms never became severe enough to warrant a stay at Botšabelo. Soon, Pulane returned home to her family in Ha Rasekoai.

On this day in October, she had no sign of a cough as she talked about her household chores, her love of newspapers and magazines—especially gossipy or celebrity relationship-oriented magazines—and how one day, she hopes to be a nurse or a policewoman.

Treatment supporters are an aspect of care that, for PIH, is unique to tuberculosis. While PIH teams around the world utilize community health workers to screen multiple neighbors and communities for numerous ailments, ranging from HIV to high blood pressure, treatment supporters for TB only care for one patient at a time.

Or, in this case, two. Ngoanapoli has been the TB treatment supporter for Pulane and for Pulane's aunt, Tseleng Matsuma. The role has meant that Ngoanapoli, 52, visits Pulane and Tseleng every day, to help them take their medicines, check up on them, and provide support and access to care.

Ngoanapoli, who also lives in Ha Rasekoai, said this was her first time as a treatment supporter. She has known Tseleng, Pulane and their family for a long time, and knows their history with TB. She said that knowledge motivates her every day.

"I became a treatment supporter because of the compassion I feel for this family," Ngoanapoli said. "I know that I have to give good care to them—because these people have to live."

The third member of the family to be diagnosed with TB in 2018 was Mamots'oane Taole, 32, also a daughter of Moholi and Matankiso. Like her sister Tseleng and her niece Pulane, she also is on the way to recovery.

Matankiso said the personal, compassionate care the family received from PIH was instrumental in the positive outcomes for her family.

"It's the kind of care that has follow-ups," she said. "In my honest opinion, this is the best kind of care we could have received."

Now married for 45 years, Moholi and Matankiso have 16 grandchildren, several of whom are playing outside in gray school uniforms while their grandparents talk in the kitchen. Matankiso said these days, when the entire family gathers, the biggest problem they have is a happy one.

“When they are all home for holidays, there is nowhere to sit, because it is so crowded,” she said.