For more than two decades, PIH has treated and prevented tuberculosis (TB), multidrug-resistant TB (MDR-TB), and HIV/TB in some of the poorest and most vulnerable communities in the world.
× 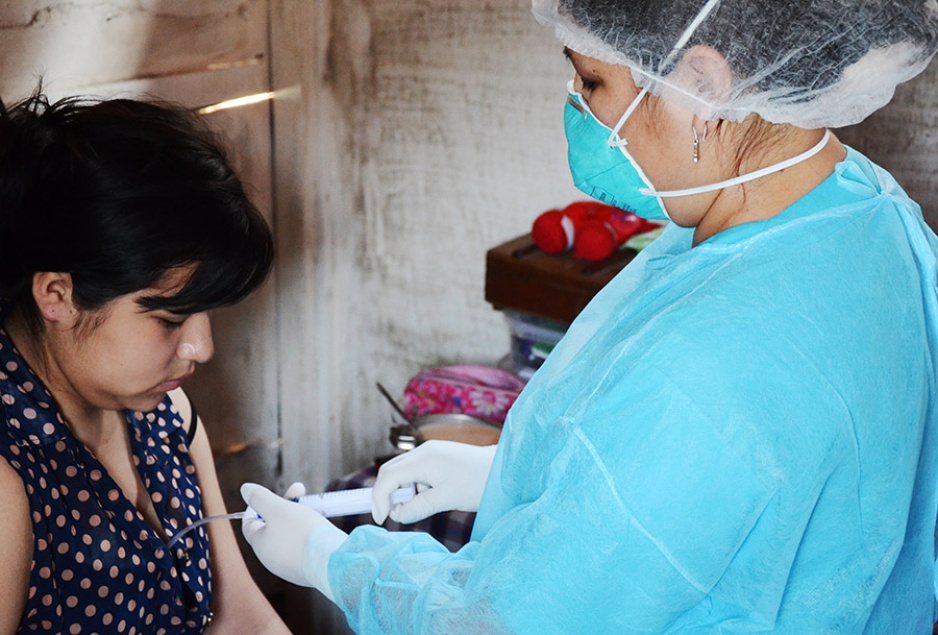 Melissa Sanchez, a patient with extensively drug-resistant TB, is treated for the disease under the supervision of a nurse conducting a home visit. The nurse is administering treatment via a central venous catheter.
Photo: by Raul Silverio Carbajal/Socios En Salud

For more than two decades, PIH has treated and prevented tuberculosis (TB), multidrug-resistant TB (MDR-TB), and HIV/TB in some of the poorest and most vulnerable communities in the world. Our community-based approach to care has resulted in some of the highest cure rates and lowest treatment default rates ever recorded.

These results prove that health problems once thought to be untreatable can be addressed effectively, even in poor and geographically remote settings. Our goal is to share the success of our approach on a broad scale.

The community-based approach utilizes community health workers who are trained and employed to serve as a vital link between their villages and medical facilities. They deliver drugs and treatment support to patients requiring complex drug regimens, and they provide TB drugs and antiretroviral therapy to patients co-infected with TB and HIV. They also monitor the health of their neighbors, perform active case finding, and refer sick patients to the hospital—often accompanying them there.

To increase the impact of our approach and avoid the creation of parallel systems, we partner with local governments and provide technical assistance to build up the public sector. Three of our original MDR-TB pilot projects have successfully been handed over to national Ministries of Health, where they can be scaled up nationally and provide training and technical assistance to other countries in their regions.

TB is a common—and in many cases lethal—infectious disease. It usually attacks the lungs, but it can also affect other parts of the body. It is spread through the air when people who have an active TB infection cough or sneeze. Symptoms of TB include a chronic cough with blood-tinged sputum, fever, night sweats, and weight loss. Diagnosis relies on chest X-rays, a tuberculin skin test, and blood tests, as well as microscopic examination and microbiological culture of bodily fluids.


Treatment is difficult and requires long courses of multiple antibiotics—typically at least six months for drug-susceptible TB, according to the Centers for Disease Control and Prevention. Social contacts are also screened and treated if necessary. When people fail to complete the drug regimen for TB, the disease becomes resistant to treatment. It often develops into the more deadly MDR-TB.

Tuberculosis in the developing world

A person falls ill with tuberculosis about every three seconds—the vast majority of whom live in poor countries. According to the World Health Organization, 95 percent of all TB deaths occur in developing countries, resulting in about 10 million children who are orphaned due to TB deaths of one or both parents. People in the developing world are more likely to contract tuberculosis because their immune systems are more likely to be compromised due to HIV/AIDS. Today, TB is the leading cause of death for people infected with HIV/AIDS.

This disease offers a glaring example of the health care inequities that exist in the world. Drugs to fight TB have been in existence for 50 years, yet the disease continues to kill almost 4,000 people every day—nearly all of them in developing countries.

PIH also is working with organizations Médecins Sans Frontières (Doctors Without Borders), Interactive Research and Development, and financial partner UNITAID to radically change the management of MDR-TB around the world.

In a project called “endTB,” the group aims to bring two new drugs—bedaquiline and delamanid—to 16 countries in which MDR-TB poses a significant burden. The endTB project will provide these new drugs to a multi-country group of 2,600 patients, and will implement a clinical trial among 600 additional patients to identify treatment regimens that are shorter and less toxic than current MDR-TB regimens.

The hope is to dramatically expand access to these new drugs globally, develop new treatment regimens for MDR-TB, and ultimately improve the quality of life for countless patients.