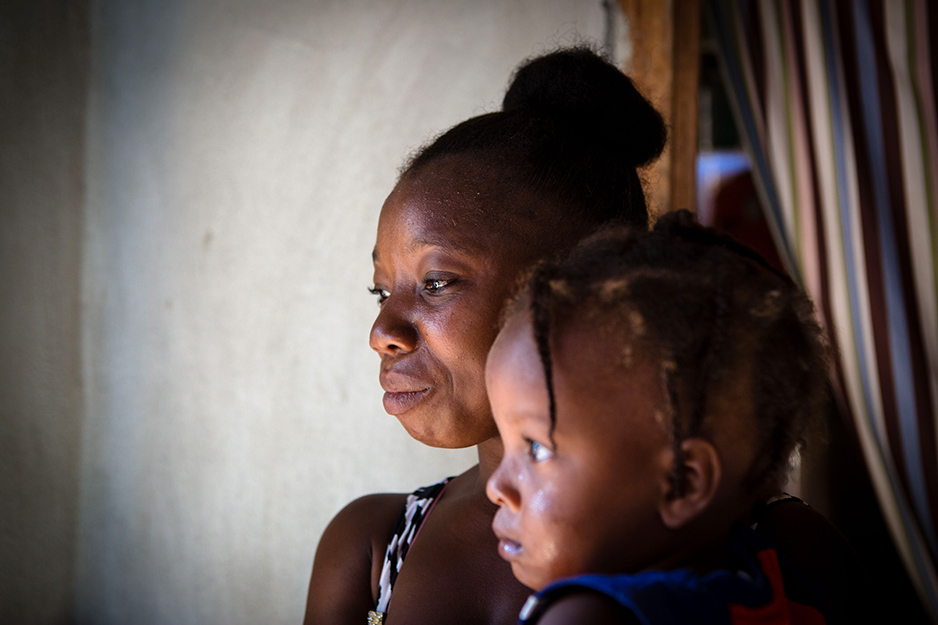 Martha Cassemond curled her petite shoulders forward and shrank into her chair. The 25-year-old patient was shy and reserved. Her hands fidgeted whenever she spoke. Clearly, she was nervous, a normal reaction for someone not used to talking about her battle with cancer.

A visitor wanted to know what Cassemond did each day. She looked down, her hands formed small fists, and she ground them into her eyes. Anyen, or "nothing," she said in Creole, fighting back tears.

Oldine Deshommes knew it wasn’t true. The social worker with Zanmi Lasante, as Partners In Health is called in Haiti, has known the patient for years. She translated the question a second time.

Again, Cassemond said she did nothing. This time, she couldn’t stop tears from sliding down her cheeks and falling on her zebra-print summer dress. That was the problem, she said. She cooked, cleaned, and stayed at home most days with her 2-year-old son, Jamesly Louis-Saint. She just wanted a job to help support her family, and felt ashamed that she hadn't yet succeeded.

Like many cancer survivors, Cassemond has been through a long and painful journey. She was sick for many months, got access to free cancer care through PIH, and gradually felt better. She had been focused on her illness for so long that it was hard to envision a healthy life. It’s a common tale among patients in Haiti, where quality health care is rare, and a cancer diagnosis is typically a death sentence.

PIH has been striving to change that perception since 2010, when Dr. Ruth Damuse, an internal medicine specialist, started providing oncology care at the hospital in Cange. Three years later, she and her team transferred oncology services to the newly finished University Hospital in Mirebalais, where patients arrive from across Haiti with a variety of diseases—from breast and cervical cancer to leukemia and lymphoma. Many patients come in late stages of the disease, but others arrive in early enough stages to hope for a cure.

Damuse and two other internists, Dr. Danjoue Satyre and Dr. Joarly Lormil, see new patients four days a week, while three nurses and two auxiliary nurses administer curative or palliative chemotherapy to more than a dozen patients each day in the tidy, but packed, oncology ward. Cushioned recliners and beds are always full, and patients often spill over to a back wooden bench where they sit for hours attached to IVs.

Although Cassemond doesn’t come to University Hospital for chemotherapy, she will depend on its pharmacy for the rest of her life. She visits every three months to pick up her supply of Imatinib, a drug that combats her specific form of cancer—chronic myelogenous leukemia, or CML.

Cassemond was just 12 years old when she got sick. It started with pain in her belly, then her abdomen grew bloated and swollen. A cousin had heard of the PIH-supported hospital in Cange and recommended Cassemond’s family take her there. It was a several-hour car ride from their home in Cornillon, near the border with the Dominican Republic, but she and her father made the journey hoping to find answers.

Dr. Romain Jean Louis, who now directs PIH’s pediatric department at University Hospital, examined Cassemond, took a biopsy, and sent the tissue to Boston for analysis, as there were no reliable pathology services in Haiti at the time. While they awaited results, the preteen remained hospitalized in Cange, and nurses gave her Ibuprofen to manage her pain.

Tests revealed that Cassemond had CML, a rare form of blood cancer for which treatment was not available in Haiti. The drug was relatively new, only a couple years old, and sold for more than $100 per pill in the United States—a hefty price for anyone to pay without the aid of health insurance. The majority of Haitians make less than $2 per day, including Cassemond’s family. There was absolutely no way they could afford the drug.

PIH advocated on Cassemond’s behalf and finally, after 12 months, negotiated a regular supplier of the drug and sent the first shipment to Cange. She was among the first of a growing number of PIH patients who benefited from the medication, which by all accounts was miraculous. Cassemond said her pain disappeared over time, and her belly returned to its normal size. Her energy returned, and she could finally concentrate on something other than survival.

PIH staff found a home for Cassemond near the hospital grounds and helped pay for her schooling. They wanted to keep her close to continue monitoring her condition. Her family visited when they could, and she made the trek back to Cornillon on school breaks.

Cassemond has now been on her medication for 13 years, her only break the nine months she was pregnant with Jamesly to ensure his safe development. She hasn’t noted any side effects. As long as she takes her daily pill on a full stomach, she feels fine. There is no doubt in her mind that the medication keeps her alive.

After sharing her story, Cassemond took visitors to her modest, two-room home a stone’s throw from University Hospital. She stepped around discarded plastic bags and tin cans as she wound through her neighborhood, each home in need of paint, a new zinc roof, or other repair.

A group of pint-sized boys ran past, one in nothing but his birthday suit and sucking a green lollypop. Cassemond grabbed the hand of one of the toddlers, whose hair was plaited into spiky braids. She looked back at visitors, as if to say, “This one is mine.” Jamesly clasped his mother’s hand the rest of the way home.

The two rooms were sparsely furnished—a bed and plastic lawn chair in the front, another bed and plastic buckets of clothes in the back. A blue curtain swayed gently at the front door. Cassemond and her partner, Johnson Louis-Saint, couldn’t yet afford a door. Instead, they were making one from a discarded wood sign resting against their front porch.

Cassemond held her son close as he eyed the visitors. He was mischievous, she said, not always this quiet and shy. She smiled as her son stubbornly refused to speak. At home once more, she seemed to soften and relax. She was a mother proud of a wily little son, whom she bathed, clothed, fed, and put to bed every night.

That, many parents would agree, is never nothing.