From a fix in Massachusetts to an assist for U.S. public health jobs plan

It was April 2020, and the director of Partners In Health’s COVID-19 response in Massachusetts was on a tight deadline to determine how many people would be needed to launch an ambitious, statewide contact tracing workforce to help bring the newly raging pandemic under control.

So Welch, along with Emily Dally, PIH’s impact director, pored over a few early papers out of Wuhan, China for reference, and then got to work. They required a detailed hiring plan and budget for the Massachusetts Contact Tracing Collaborative, in which PIH was partnering with the state. How could they predict and plan for shifting workforce needs during an ever-changing pandemic?  To start, they had to figure out how many COVID-19 cases there would likely be in the state, and how much time it would take to investigate those cases, reach out to contacts, support individuals and families with additional needs during the crisis, as well as other critical data.

“We were on Teams late into the night modeling together,” Welch said. In the end, they’d built a basic, “little” workforce calculator that partners from the professional services company Accenture later helped to adjust and improve over the year, through case surges and plateaus.

“One of the things that’s been so fascinating is how all of this [U.S.] work unfolded,” Welch added. “It started with contact tracing and then just kept going.”

Indeed, the journey of the workforce modeling tool reflects the scope of work PIH has taken on in the U.S. That work includes accompanying and advising public health workers and communities during the acute phases of the pandemic -- from contact tracing to vaccine rollout; supporting learning with up-to-date public health guidance, protocols and research made available to peer organizations and community leaders throughout the country; and urging lawmakers in the top ranks of government to adopt policies that lead to stronger public health systems that meet the needs of underserved, neglected communities. “The tool, in its flexibility and effectiveness in a variety of contexts,  mirrors the three pillars of our overall model,” said Katie Bollbach, director of the USPHAU. “Advising, Learning, and Advocacy.” 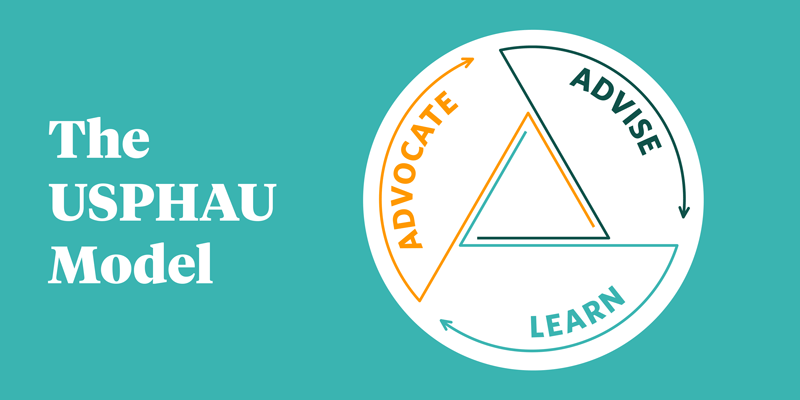 In July, a few months after PIH’s U.S. Public Health Accompaniment Unit was launched to assist states, cities, and communities build a more equitable, comprehensive public health response to COVID-19, the tool appeared again. The USPHAU Learning Team which develops and distributes the latest public health guidelines, protocols, and research to peer groups around the country, realized that the workforce calculator used in Massachusetts could be useful to other health departments nationwide. So, the team adapted it for general use, making the PIH Contact Tracing Workforce Modeling Tool accessible to peer organizations and partners via the USPHAU’s online resource library. Representatives of 117 organizations in 30 states have access to the library and the tools, protocols, and frameworks it contains.

The following month, a request came in from the Illinois Department of Public Health. State administrators asked for assistance estimating the size and scope of its COVID-19 workforce. Dr. Pranali Koradia, a USPHAU adviser, turned to the calculator for guidance, and the team supporting Illinois tailored the tool’s methodology to help predict Illinois’ hiring needs based on epidemiological trends and case rates. Ameet Salvi, the former project lead in Illinois, said the team generated hiring estimates for all 97 of the state's local health departments and outlined the assumptions and mechanics of the model to encourage hiring.  "I can't draw a direct correlation between our contributions and specific impact, but I would say the exercise provided a directional target that jumpstarted hiring and contributed to the state eventually achieving contact tracing targets."  Eventually, the state hired 2,520 workers, including contact tracers and case investigators, to support the COVID-19 case load.

Justin Mendoza, PIH’s advocacy lead, was closely tracking Biden’s health agenda. He knew those numbers wouldn’t be high enough to meaningfully improve the nation’s chronically underfunded public health infrastructure and make the system far more equitable to communities long hurt by structural racism and also hit hardest during the pandemic. He just wasn’t sure what the right numbers should be.

Mendoza said he needed evidence to make the case for a bigger, more ambitious public health workforce: one that he thought should be closer to one million strong. Enter: the workforce modeling tool, yet again. Impact Manager Lindsey Wang and Senior Project Leader Grace Lesser used the modeling methodology to identify staffing needs of a new nationwide workforce -- including about 550,000 community health workers -- that could address the immediate health crisis and then transition into longer-term public health work to strengthen the system well into the future.

To help popularize the concept, PIH’s CEO Sheila Davis co-wrote an op-ed with Sen. Kirsten Gillibrand of New York in February 2021, published on CNN, calling for an expanded public health workforce to take on COVID-19.

In March, President Joseph Biden signed the American Rescue Plan Act, which included $7.6 billion to invest in the types of community-centered jobs that PIH and the Public Health Jobs Now! Coalition had advanced. This historic law called for far more public health jobs than initially envisioned; and it constituted the largest one-time investment in public health and community health in the past three decades. After many months spent developing partnerships and building relationships with influential decision makers and laying out a compelling agenda, PIH viewed the new law as a major breakthrough.

The work did not stop there. Based on recommendations from the Public Health Jobs Now! Campaign and community-based partners, PIH hosted a roundtable with officials from the White House and U.S. Department of Health and Human Services on workforce investments in March, and encouraged decision makers to invest in community and public health roles. Many of these recommendations informed the structure of programs led by the Centers for Disease Control and Prevention and other key agencies.

One of these programs, under the Health Research and Services Administration at the Department of Health and Human Services, is a historic $250 million investment in vaccine equity and access, including $120 million earmarked for local community-based organizations as essential stakeholders in the fight against COVID-19.

PIH is continuing its efforts, seeking to build off these initial investments to create long-term funding so community-based organizations can continue the kind of locally inspired, on-the-ground work that saves lives.

“What makes this story unique,” Mendoza said. “is that we were able to take something -- a highly technical answer to one problem in one state -- and use it to change the entire space in public health funding. That’s the beauty of this team: We are on the ground in communities, but also able to influence national policy in critical ways.”