Mable's Story: A Tale of Progress, and a Mother's Loss, in Liberia 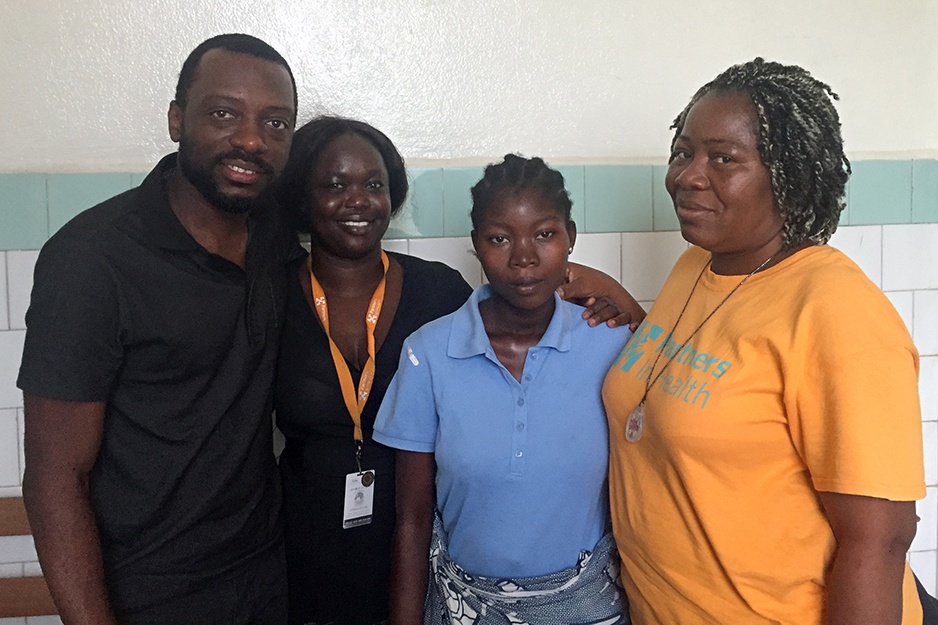 Last summer in Maryland County, Liberia—the poorest corner of one of the world’s most impoverished nations—16-year-old Mable Elliot found out she was pregnant.

She promptly visited J.J. Dossen Hospital, arguably the best referral hospital for the southeast region of Liberia. It serves half a million people and has been supported by Partners In Health since 2014. After that first visit, Mable returned to the “big belly clinic,” as she called the hospital’s prenatal clinic, for two more check-ups over the next couple of months. When her due date neared, she walked over ahead of time to drop off a bag of clothes and other things she’d need after delivery.

Mable was a bright, resourceful young woman, who had to quit school in the eighth grade to help her mother around their home, and was eager to resume her education.

What unfolded at the hospital while she was in labor, though, was devastatingly tragic, as Mable ultimately lost her baby. The fact that her own life was saved, however, is a testament to the strides PIH has made in remote, under-resourced Maryland County, where 4 out of 5 people live in absolute poverty.

There was something off from the moment Mable went into labor. One morning about a week before she reached full term, while Mable’s grandmother was away and her mother was at the market, Mable’s stomach felt far more tender than it should have. Her aunt, assuming she was just hungry, advised her to stop waiting in the yard and eat a big breakfast. When that failed to lessen the pain, her aunt steered Mable, now fighting back tears, to the bathroom, in case she needed to vomit. She didn’t. With Mable feeling panicked and confused, and hurting, her aunt took her on a motorbike to J.J. Dossen.

The hospital was better off, at that time, than it had been in quite a while. Médecins Sans Frontières had helped the government run it from 1997 to 1999. Merlin, a United Kingdom-based charity since absorbed by Save the Children, tried to revive it from 2004 to 2013. Both organizations had left, though, by the time PIH started working with the government’s County Health Team in late 2014. Mold and corrosion had taken a toll, and shortages of equipment, pharmaceuticals, and pay for government staff all had affected services. PIH has worked since 2014 to rebuild or refurbish almost all of the wards, train and pay staff, and collaborate with the government to get the hospital standing tall on its own two feet.

Mable was not in a good state. Her baby's heart rate was as fast and faint as a hummingbird's. For mysterious reasons that affect about 1 in 150 pregnancies, her placenta had begun tearing away from her uterus, a condition known as placental abruption. Blood was seeping out and soaking into her uterine walls, causing the bellyache. Her baby, missing the oxygen that normally would have come through the now-detached placenta, was working hard to survive.

In most countries, Mable, despite her significant internal bleeding, would be virtually guaranteed to survive, and her infant would have decent odds of not only being born, but thriving.

In Liberia, though, maternal mortality rates are among the highest in the world.

Mable’s labor did not take place amidst a stable health system, with facilities reached on passable roads, reliable electricity, and an adequate drug supply. The odds provided by an insufficient health system were stacked against this mother and child, and the baby passed away before a cesarean section could even be considered as a viable option to securing life. The physician put Mable’s own chance of survival at 50 percent, as she wheeled the faint and pale young mother into the operating room. Mable had incurred a dangerous amount of blood loss due to her abruption, and was in desperate need of seven units in order to live.

The team scrambled. Mable lay on the table as a handful of nurses and orderlies rushed through the hospital gates and fanned out into the community. They talked with passersby, shopkeepers, motorcycle-taxi drivers—anyone who might be willing to donate a pint of blood. Four hours later, they returned with roughly a half gallon of clean O-positive.

However, in the time it took to go out into the community, Mable’s obstetrician, Dr. Sarah, needed to make a medical decision that would save Mable’s life, but alter her future. In order to stop the rate of bleeding and give Mable a chance of survival, she needed to undergo an emergency hysterectomy, closing off her ability to have children. Fortunately, a skilled Ugandan obstetrician had arrived one month prior, to serve the women of Maryland County. Her ability to perform the nine-hour procedure and her experience working in challenging environments were both necessary to keep Mable alive, as the community banded around her to acquire lifesaving blood. Otherwise, this story could have had a much more tragic ending.

Mable required all of the lifesaving blood gathered from the community to recover from the initial abruption, and for Dr. Sarah to safely complete the operation. PIH understands that such a difficult experience doesn’t end at discharge, and the team continued to provide counseling to this grieving young mother. The PIH and J.J. Dossen team also know that helping this talented young woman return to the classroom is important for Mable personally and economically. The reality is that her viability for future marriage, and economic stability through that institution, diminished with her inability to have children. Education is her best option for economic stability.

Mable’s is a story of what could have been, if only. If only poverty did not take children out of school. If only reproductive education and access to birth control were readily available. If only teen mothers and other high-risk pregnancies received more monitoring and scheduled care. If only there was 24-hour electricity, to ensure a blood bank that would allow a short window from decision to incision. If only.

Every improvement in Maryland’s health sector has been made in the face of competing priorities. J.J. Dossen’s new electricity generator meant a longer wait to raise funds to purchase the anesthesia machine. Even with the generator, there is still not a guarantee of 24-hour electricity. An irregular power supply means a blood bank is not possible at this district hospital. Difficult choices are made every day. New infant warmers meant no funding for meeting the increasing demand for tuberculosis drugs. These tradeoffs over necessities are fundamentally tied to how Mable was able to survive, while her baby didn’t.

Mable, and the many other young mothers in Liberia and other communities in which PIH serves, remains front and center in the minds of the committed PIH staff and partners as we make sure we need not say, “if only,” again. A blood bank is in the works, as are other advances that would help emergency cases like Mable’s, ranging from talks about reproductive rights to scheduled C-sections for high-risk patients. There are so many needs, and every gain is vital—something Mable knows especially well. She’d like to become a doctor, she says.