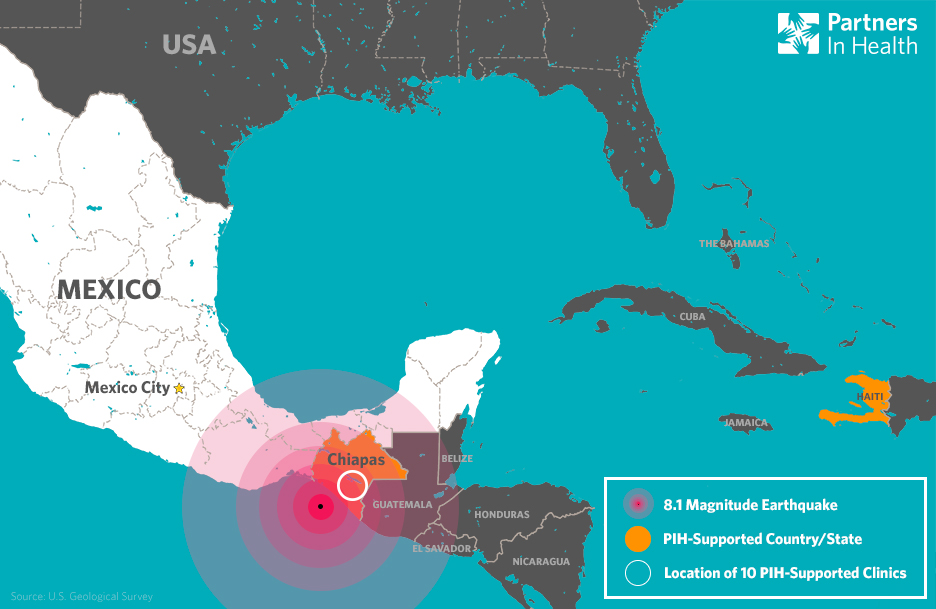 A magnitude 8.1 earthquake struck off the southern coast of Mexico late Thursday night, with tremors felt hundreds of miles away in the capital Mexico City and into neighboring Guatemala. The epicenter was closest to the state of Chiapas, where Partners In Health collaborates with the Mexican government to provide health care in 10 rural clinics throughout the Sierra Madre.

PIH leaders in Chiapas surveyed communities early Friday to check on clinicians and staff. Doctors at all 10 clinics had been contacted by Friday afternoon, and all responses were positive. Some clinicians heard reports of minor damage to residents’ homes or roofs, but no one had come to PIH clinics for emergency care as of late Friday.

One clinician in Soledad said the powerful quake created a crack along an interior wall in the clinic there. Another doctor, in the remote community of Monterrey, reported a mudslide on a nearby mountain, but hadn’t heard of any resulting injuries. Other staff based in Jaltenango saw piles of rubble dotting the streets.

Aftershocks continue to rock the region, and PIH staff worried that the situation could take a turn for the worse.

“We are concerned for those living in very poor, inaccessible mountainous regions, where landslides have historically wiped out entire communities,” wrote staff with Compaňeros En Salud, as PIH is known in Mexico. “We are in the rainy season, and another strong earthquake may cause major disasters in the area. Because most people live more than two hours away from the nearest hospital and the unpaved roads often become impassable, a huge effort to open channels of transportation and communication would be required to provide adequate medical care.”

The PIH team continues to collaborate with the local government by providing medical supplies and helping prepare a contingency plan if evacuation is necessary from the hospital in Jaltenango or nearby clinics.

It was unclear late Friday how many people had been injured or killed in Chiapas or other states closest to the quake’s epicenter, nor how much damage it had caused to roads and buildings.

The New York Times reported Friday afternoon that dozens had been killed in what is being called Mexico’s biggest quake in decades.