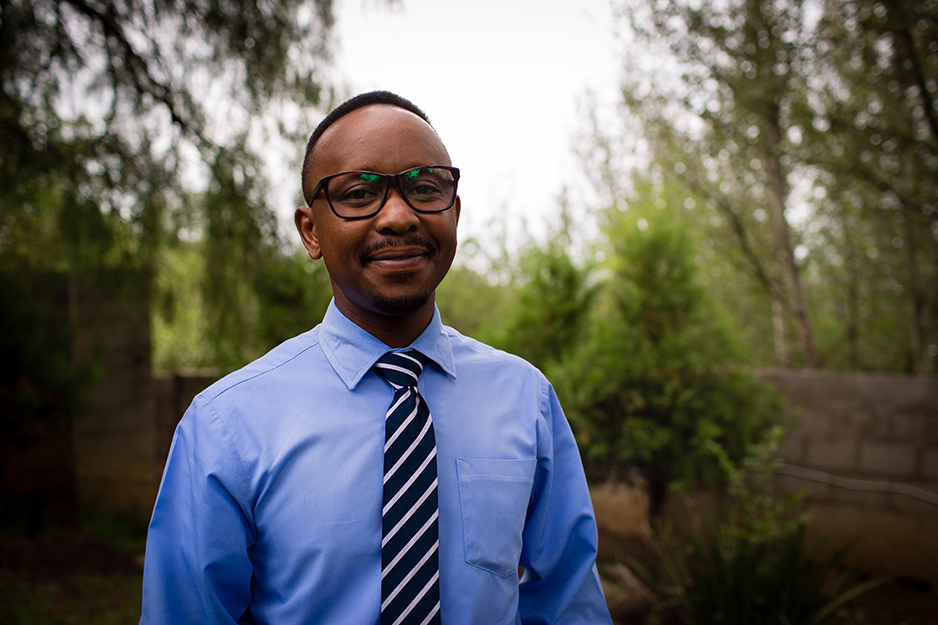 When Mojela Masupha was a site administrator for two rural health clinics in Lesotho, he needed a way to travel over steep mountain trails and rugged terrain.

It wasn’t easy to meet village leaders, collect blood samples, carry medical supplies, and more, in some of the most remote areas of Lesotho, a high-altitude nation surrounded by South Africa. Cars weren’t feasible. Neither was walking the long distances between villages, or flying frequently by small plane or helicopter.

So, Partners In Health trained Masupha to ride off-road motorcycles—and a new passion was born.

“It was my first time riding a bike on my own, and it was a dream come true,” Masupha recalled. “It has since become a lifelong habit—so much so that in my spare time, I teach people how to ride with discipline.”

Masupha, 36, now works in the Maseru office as a human resources coordinator for Bo-mphato Litsebeletsong tsa Bophelo, as PIH is known locally. Along with his supervisor, Human Resources Manager Tholoana Mohapi, he is one of the longest-serving members of PIH’s team in Lesotho. Masupha was hired in 2008, about a year after PIH began supporting Lesotho’s Ministry of Health.

“He is passionate about the work we do, and once he is convinced about any new intervention or strategy, he runs with it, with strong commitment,” Mohapi said. “He’s a people person. He interacts with people with ease and is able to disseminate needful information to staff and other partners skillfully.”

Masupha began his PIH service at the mountain clinics, spending two years at Nkau and a year at Nohana before joining the Maseru staff in 2011. Getting around in Maseru, Lesotho’s capital, is a little easier than it was in the mountains. But Masupha still has a bike parked outside the office, and another one at home.

He especially enjoys riding with his two sons, ages 5 and 12.

“I ride my bike almost every day to work and my youngest son is thrilled by bikes,” Masupha said. “I take him on short rides. My older son has just recently shown interest, after I took him for a good rough-terrain ride.”

Mohapi has worked with Masupha since he joined PIH. She said he gained far more than motorcycle experience during his time in the mountains.

“That was where his leadership skills were groomed,” Mohapi said. “He proved himself to be an excellent, remarkable leader.”

And he gained some memorable stories.

Like when PIH staff in Maseru asked Masupha to travel to a remote village, about four hours from the Nohana clinic by horseback, to get a letter from the village’s leader. When presented to government officials in Maseru, the letter would enable a sick patient from the village to get a passport and cross the border into South Africa for specialized treatment.

Co-workers who knew the area told Masupha that no one had ever reached the village by vehicle, including motorcycles. Nonetheless, he decided to ride his Honda.

The ride back turned out to be the problem.

After reaching the village and getting the necessary papers for the patient, Masupha was returning to Nohana when the bike got stuck between boulders in a small stream at the bottom of a ravine, known as a “donga.”

“I wrestled the bike with no luck, until I was sweating profusely,” Masupha recalled. “I had to climb out of the donga on foot and seek help.”

Fortunately, some boys tending herds nearby agreed to lend a hand, and with much effort—and a few falls into the stream—they all were able to push the bike out of the ravine.

“When I got back to the clinic, many were in awe that I made it,” Masupha said. “But in my head, I was just remembering that at PIH, we have a saying: We do ‘whatever it takes’ to see someone get the medical attention they need.”

Masupha said he thinks about that trip sometimes, when he’s riding along the paved roads of Maseru. It makes him think of how far PIH has come with supporting health care for all, over the years.

Masupha has come far, himself. He was born in Maseru but his family is from Berea District, just to the north. He said he “grew up in a hospital setting,” as his mother was a nurse and he volunteered during high school at Queen Elizabeth II Hospital in Maseru.

Masupha said when he saw the opportunity to join PIH, he jumped at it.

“I thought, ‘This is what I’ve wanted to do for a long time,’” he said. “Even if I’m not a doctor, at least I could touch sick people somehow, and help them. It really satisfies me when I see a patient who is happy, who is healed, and know I had a stake in that.”