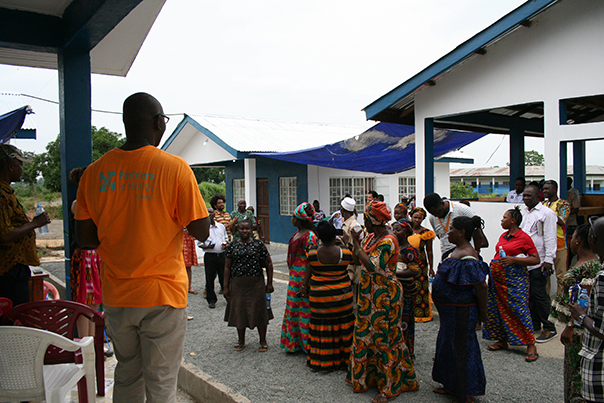 Supporters gather near the newly built waiting homes during a ribbon-cutting ceremony at the end of April.
Photo by Emily Bearse / Partners In Health

Others are bigger. Elsewhere they’re more plentiful. But it’s tough to beat the understated dignity of the new birth waiting homes that Partners In Health opened in eastern Sierra Leone last week.

The three white houses sit on a hill at the quiet edge of the city of Koidu. Four beds in each bright, airy building will welcome a total of 12 expectant mothers at a time. Shaded porches will provide a place to rest. At the back is a small examination room where nurses can perform daily checkups. In a covered outdoor kitchen nearby, a cook will prepare breakfast, lunch, and dinner. While other waiting homes ask mothers to pay their own way or work off the cost of meals and accommodations by washing dishes, the PIH waiting home offers everything for free. Best of all, the home sits just a stone’s throw from Wellbody Clinic, where there hasn’t been a single maternal death in two years.

In Sierra Leone, half of all women give birth at home, and many die or lose children after suffering complications that could have been addressed at a well-equipped health clinic staffed by trained personnel. The national maternal mortality rate, 1,100 per 100,000, is one of the highest in the world. The hope is that women will come to the homes ahead of their due dates, when nothing is an emergency, and then give birth in the clinic. During the soft opening this spring and summer, the home will welcome patients from the three nearby areas with the highest maternal mortality, per the advice of local health officials. They’ll then reach out to more distant regions and welcome any mother likely to have a tricky birth.

There’s no guarantee the community will take up the offer. Birth waiting homes have been around since at least the 1970s, and there have been plenty of misfires. In Ghana, an early attempt at a waiting home in an abandoned ward of a hospital attracted just one mother, and she stayed only for a night. (Feedback cited the “desolate” setting.) Mozambique’s early homes lacked local political support and failed to take off. In Indonesia, expectant mothers were asked to pay dearly for small, thatched-roof huts attached to the houses of male strangers. Needless to say, the women declined.

Waiting homes are improving on the whole, however, and are en route to being everywhere from Cuba to Mongolia. A free maternal waiting home in Malawi virtually eliminated maternal mortality in the area. At an expansive complex in Zimbabwe, up to 100 women are checked in at any time. They say the days are a rare respite from domestic responsibilities and often sing, especially while relaxing together at night.

The home in Sierra Leone is still a ways from being that established. But clinic staff have reason to be optimistic. PIH’s commitment to offer not just adequate but great health care has resulted in a half dozen successful waiting homes around the world—in Mexico, Malawi, and Lesotho. And in Sierra Leone, though the home itself is low-key and dignified, the team's PR approach is direct. They recently appeared for an hour on a talk show on the local public radio station, FM 90.2. After answering caller questions, they concluded with, “Let us encourage the women in our lives to come stay at the birth waiting home to have a safe birth!”