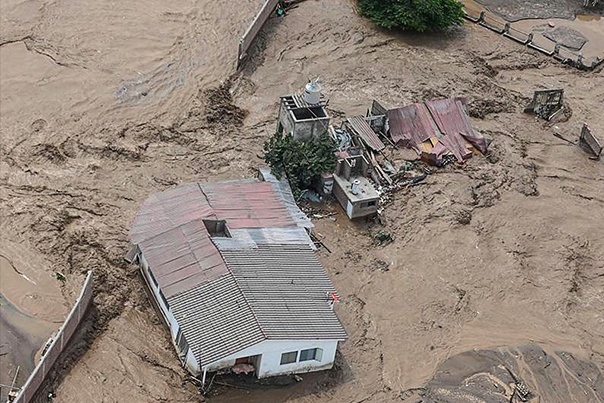 Since March 20, PIH staff and dozens of volunteers have provided medical attention and social services to more than 250 flood victims across 10 communities in Carabayllo, where the organization has worked for more than two decades. Residents arrive at mobile clinics with nail puncture wounds, cuts from broken glass, persistent coughs, and diarrhea following days of little access to clean drinking water. While teams distribute medication, they also give out food and bottled water.

Meanwhile, other PIH staff and volunteers go door-to-door searching for patients too overwhelmed to seek care and escort them to mobile clinics.

(Update as of March 23)-- Partners In Health in Peru established two mobile clinics yesterday in the Fujimori and Huarangal neighborhoods of Carabayllo, a slum on the northern outskirts of Lima. Staff offered basic medical attention to flood victims, most of whom arrived cold, exhausted, and badly bruised. Care was in such urgent demand that medical teams ran out of supplies. The crews returned today with more medicine, bandages, and other goods to the same locations.

In coming days, PIH staff will continue to push north along the flooded Chillon River to reach Canta, a neighborhood 70 miles north severely affected by flooding.

(March 22)-- Torrential rains pummeled Peru over the past week, causing widespread flooding, devastating landslides, and massive destruction throughout the country. One of the most ferocious rainy seasons in decades has already dumped up to 10 times the normal amount of precipitation, hitting the west coast, including metropolitan Lima, particularly hard.

More than 70 people have died and 600,000 have seen their homes demolished or damaged, according to the United Nations. Entire villages have been swallowed by flood waters washing down from the Andes, sweeping away homes, livestock, and crops with frightening speed and intensity.

The devastation is far from over. Meteorologists predict that today’s rainfall will be unprecedented. And another four weeks remain of the rainy season, promising little relief.

The Peruvian government has declared a state of emergency in roughly half of the country and is coordinating rescue and relief efforts throughout Lima and other major cities. Yet urban slums and rural regions beyond the capital have largely been cut off from aid due to impassable roads and the collapse of hundreds of bridges.

“I don’t think any of us knew the extent to which this was spiraling out of control,” says Jerome Galea, deputy director of PIH in Peru.Staff from Socios En Salud, as Partners In Health is called locally, responded to the crisis in Carabayllo, a slum north of Lima where it has worked for the past 20 years, and in nearby villages that remain isolated. Executive Director Dr. Leonid Lecca traveled with a team on Monday to assess the damage. They visited with farmers who lost their homes, all their livestock, and their entire crops.

On Saturday, Lecca launched an online campaign to recruit professionals who could volunteer their services. “The response was swift,” Galea says. As of Tuesday, 2,600 nurses, doctors, psychologists, and social workers—among others—signed up for the cause.

PIH staff are working to coordinate their movements throughout Carabayllo and surrounding rural communities. Some will provide primary care out of PIH’s 12 health posts, which are doubling as collection and distribution points for donated goods. Bottled water, clothing, food, tarps, and first aid supplies are among items most in need.

Yet the rains also bring standing water, whether from flooding or open home storage containers, which poses other problems. It is fertile breeding ground for mosquitoes bearing infectious diseases such as dengue and Zika. As part of ongoing outreach efforts, PIH staff members are speaking to residents about proper water storage and distributing insect repellent.Meanwhile, PIH staff are reminding residents of the importance of maintaining hygiene. As flood waters mix with latrine waste, the risk of diarrheal and other infectious diseases spikes.

Potable water has been a rare commodity. The supply was cut for nearly one week to roughly 70 percent of Lima, a city of 10 million, after the water sanitation authority shut down a major treatment plant, fearing that an influx of debris-laden flood water would overwhelm filtration systems. Service was restored to some communities on Monday, and residents have been collecting what water they can from dripping faucets. The next water cut, Galea says, is literally only a mudslide away, and residents are storing water in anticipation.

These are still the disaster’s early days. PIH staff are anxious for what coming weeks will bring.