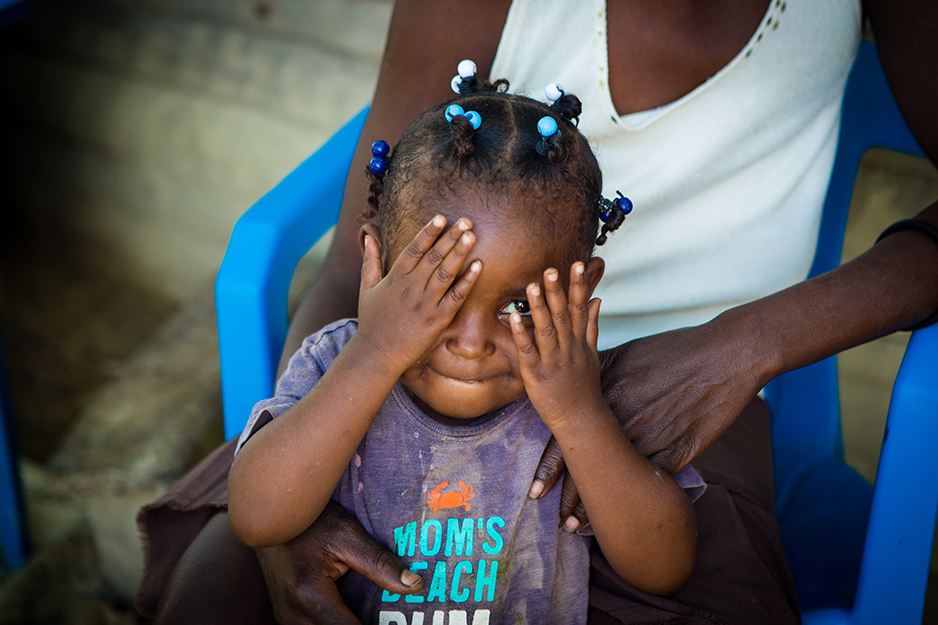 Lunie Lozama, a 2-year-old malnutrition patient, plays peek-a-boo while standing by her mother at their home in rural Lascahobas, Haiti.
Photo by Cecille Joan Avila / Partners In Health

Lunie Lozama was the picture of a mischievous toddler. Shy yet curious, she hid behind her mother’s legs and played peek-a-boo with visitors to her home in rural Lascahobas, Haiti. Her round cheeks were dimpled, and her shiny black hair twisted into neat pony tails crowning her head. She wore a faded purple onesie with “Mom’s Beach Bum” across the front. Her mother smiled as she said that her daughter wasn’t afraid to fight her three older siblings.

Lunie wasn’t always that way. In April 2016, one month after turning 2, she arrived at the Partners In Health clinic in Lascahobas and was diagnosed as severely malnourished. She weighed 23 pounds and measured 31 inches—at least five pounds lighter and three inches shorter than what the Centers of Disease Control and Prevention recommend for average girls her age.

Lascahobas is among the busiest malnutrition clinics supported by Zanmi Lasante, as PIH is known locally. Nurses tended to an average of 250 patients per month, and started a total of 1,076 new children on malnutrition care last year. At all of its 12 facilities across the lower Artibonite and Central Plateau regions, PIH enrolled more than 9,000 new cases of starving children in its malnutrition program in 2016 alone.

Those numbers fail to paint a full picture of the tragedy in Haiti, where roughly 1 in 5 children are starving, and 1 in 3 are stunted because they don’t have enough to eat.

Last year, Lunie counted among them. Her mother, Gertha Morette, brought her to the Lascahobas clinic for the first time that April. The lethargic little girl had a fever and diarrhea, wasn’t eating, and her feet were so swollen that it was painful for her to walk. Morette, pregnant at the time with her fifth child, perched Lunie on her lap and patiently fed her a packet of therapeutic food. Staff instructed them to come back every eight days so Lunie could be weighed, and to pick up a fresh supply of Nourimanba, the nutrient-enriched peanut paste PIH manufactures for malnourished children.

Getting to the clinic was easier said than done for Morette. She and her husband live with their children in a two-room, wood-slat house that straddles the top of a cliff a good 20-minute ride by motorcycle from Lascahobas. Goats are more frequent sights than vehicles along the dirt road leading to their home.

Morette paid a neighbor to take her and Lunie by motorcycle each time they had an appointment, holding Lunie on her lap while riding behind the driver and using precious money that now couldn’t go toward other household expenses. (Nearly 60 percent of Haitians live below the national poverty line of $2.41 per day, according to the World Bank, and 24 percent live on roughly half that.) Morette’s time away meant she needed to find help caring for her other children, and that she couldn’t sell produce at the market or tend her crops.

But the sacrifice paid off. Within two months, Lunie’s condition had improved from severely to moderately malnourished. Her feet shrunk to normal size, enabling her to walk without pain. She started gaining weight and shooting up in height. And she regained her appetite, eating more of what her family grew in their garden, and not just Nourimanba three times a day. Nurses told them they could start visiting every 15 days, instead of every eight.

They followed the new regimen as best they could. By mid-November, Lunie had gained more than three pounds and added another inch in height, and her mid-upper arm circumference—a commonly used indicator of malnutrition—had gone from 4 ½ inches to 6 inches.

Her body wasn’t the only thing changing. Lunie began acting much more like the stereotypical terrible 2-year-old. The toddler delivered a healthy helping of attitude, for example, on the November morning when Ms. Colin Alourdes, head nurse of the Lascahobas clinic, and Ms. Esther Mahotiere, PIH’s nutrition program coordinator in Haiti, visited her and her family. Lunie shelled green beans into a silver bowl, wedged in between Morette’s legs, as she warily watched her visitors. She barely roamed from her mother’s side, marking her territory.

A small cry came from inside their dirt-floored home. Morette stood up from her chair and led visitors inside, to where her 3-month-old daughter, Neleida, lay on the family’s sole bed. She scooped up the curly-headed infant and walked back outside.

In more ways than one, Morette had her hands full, yet the proud mother seemed calm and confident. She wanted to give back something to the nurses, whom she felt had saved her daughter’s life, and said she would recommend the clinic to any friends who feared their children might be malnourished.

There was another good reason for Morette to be at ease that morning. At the Lascahobas malnutrition clinic on the previous day, she had received wonderful news: Lunie no longer needed to return.