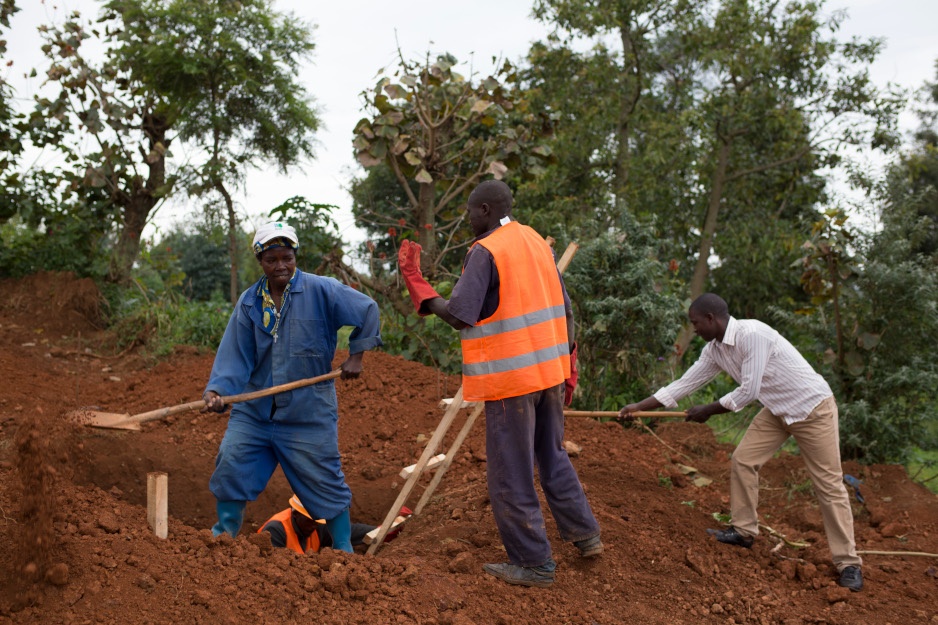 Photo by Zacharias Abubeker for UGHE
Anne Marie Nyiranshimiyimana faced criticism and stigma when she began working as a mason, a traditionally male-dominated field in Rwanda, but she soon became a dynamic presence, role model and mentor on the construction site for the new University of Global Health Equity campus in northern Rwanda.

When Anne Marie Nyiranshimiyimana began working as a mason, she was met with staunch criticism.

Despite that resistance, Anne Marie persevered and became not only one of 200 female workers on the construction site for the new University of Global Health Equity campus, but also a dynamic presence, role model and mentor. Her work helped draw international attention to the northern Rwanda site in late January, when government officials, global health leaders, educators and dignitaries gathered to formally inaugurate the campus, in the community of Butaro, with a celebratory ribbon-cutting and weekend symposium.

The job wasn't Anne Marie's first in the area. She began her masonry training during construction of the Partners In Health-supported Butaro District Hospital, just across the valley from UGHE. The university also is an initiative of PIH, which is known locally as Inshuti Mu Buzima.

Anne Marie's training and work experience has given her a passion for masonry. She's risen to the rank of master mason, while inspiring her peers along the way.

That growth was evident on the UGHE construction site. Using her knowledge to mentor and encourage others, Anne Marie quickly became a role model to women and girls in her community. Her nickname, Kankwanzi, loosely translates to “rising star that refuses to conform to society’s expectations.” That mentality is reflected by her success in encouraging females to go into masonry, a traditionally male-dominated industry. Despite a huge stigma in Rwanda around women who are employed as construction workers, Anne Marie continues to advocate for their increased involvement.

Before she developed her masonry skills, Anne Marie struggled to provide for her family. Having only been educated through primary school, she found it difficult to find a job. But equipped with a new skill set and income, her position has enabled her to buy health insurance and send her children to school.

Beyond having a ripple effect on her family and community at large, Anne Marie’s vocation also has given her an increased sense of identity and confidence.

“Women look up to [me] so much when they hear about me," she said. "They want to come work with Kankwanzi."

This story and photo originally appeared on the UGHE website, here.