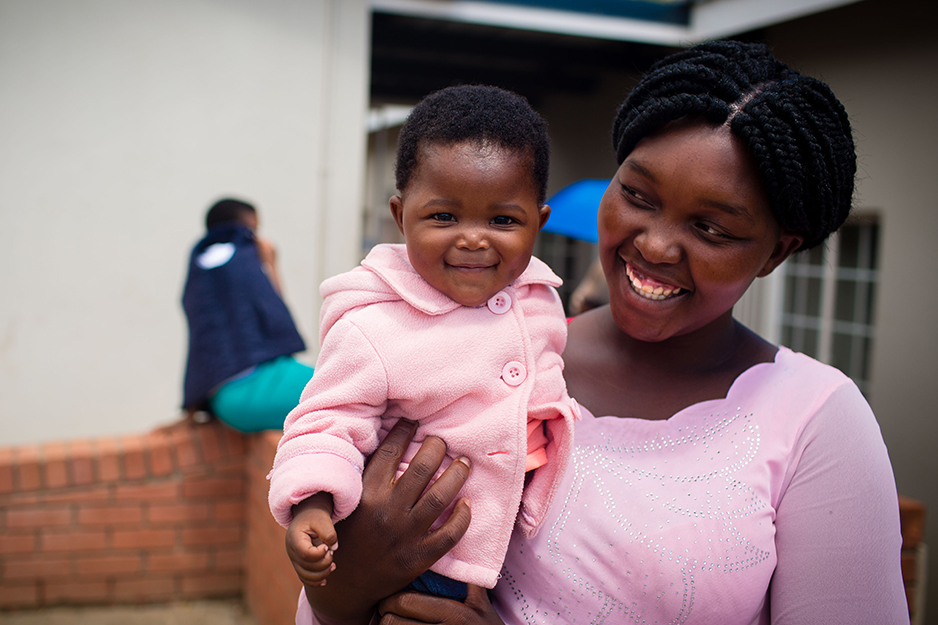 Kamohelo Phoofolo, 8 months old and bundled in a soft pink, hooded fleece, smiled happily as she sat on her mother’s lap at Mapheleng Health Center in Lesotho.

Her mother, 27-year-old Marefiloe Phoofolo, matched her daughter not only in clothing color, but also in disposition. She was all smiles as she talked about the maternal health care she had received at the Partners In Health-supported Mapheleng facility.

Phoofolo lives in the village of Ha Matoeba, where homes dot hillsides surrounded by steep ridges. The terrain is so rough, and the region so remote, that doctors from Mapheleng ride horses to the most hard-to-reach communities. Phoofolo doesn’t live quite that far away—her village is within walking distance of the health center—but she stayed at Mapheleng’s maternal waiting home for five days before she gave birth to Kamohelo, to make sure she was close to care when labor began.

While there, she received three meals a day, water for bathing and around-the-clock prenatal care. All of it was free.

Most importantly, Phoofolo had a safe, healthy childbirth at the health center, where she continues to have postnatal checkups and Kamohelo receives care as a toddler. Her birth was one of more than 30,000 facility-based deliveries—including 6,000 life-saving cesarean sections—provided at PIH-supported facilities around the world in 2017. Globally, PIH provides about two-thirds of its entire services to women and children, with the goal of reducing maternal deaths and ensuring healthy futures for the next generation.

That effort is especially vital in Lesotho, a rural, mountainous country surrounded by South Africa. The remote location of many communities, rugged dirt roads and scarcity of resources create enormous health care challenges, including for expectant mothers. One in 61 women in Lesotho will die from pregnancy or childbirth. By comparison, women in Sierra Leone face a 1 in 17 lifetime risk of dying in pregnancy or childbirth—the worst rate in the world—while women in the U.S. face a risk of 1 in 3,800.

Lesotho’s ongoing national health reform is changing that dynamic, and has fueled transformative improvements in just four years. PIH, known locally as Bo-mphato Litsebeletsong Tsa Bophelo, is supporting the reform as the primary technical advisor to Lesotho’s Ministry of Health.

Mapheleng is one of 72 health centers revitalized by the reform. Mapheleng serves about 6,200 people across 28 villages, and—with more nurses, maternal supplies and medicines—has provided facility-based deliveries for hundreds of women like Phoofolo.

Facility-based deliveries have increased by 30 percent since 2014 in the reform’s initial four districts. That equates to nearly 4,000 more safe deliveries in 2017 than before the reform.

Kamohelo was one of them. On a sunny, clear February day, Phoofolo talked with two other new mothers in Mapheleng as she held her second child. All three of the women had been referred to Mapheleng by village health workers, who provide health resources and access to care in their communities.

Phoofolo said she, too, would encourage pregnant women to use the health center for prenatal care and delivery—to help ensure more safe childbirths, and more newborn smiles, like her daughter’s.