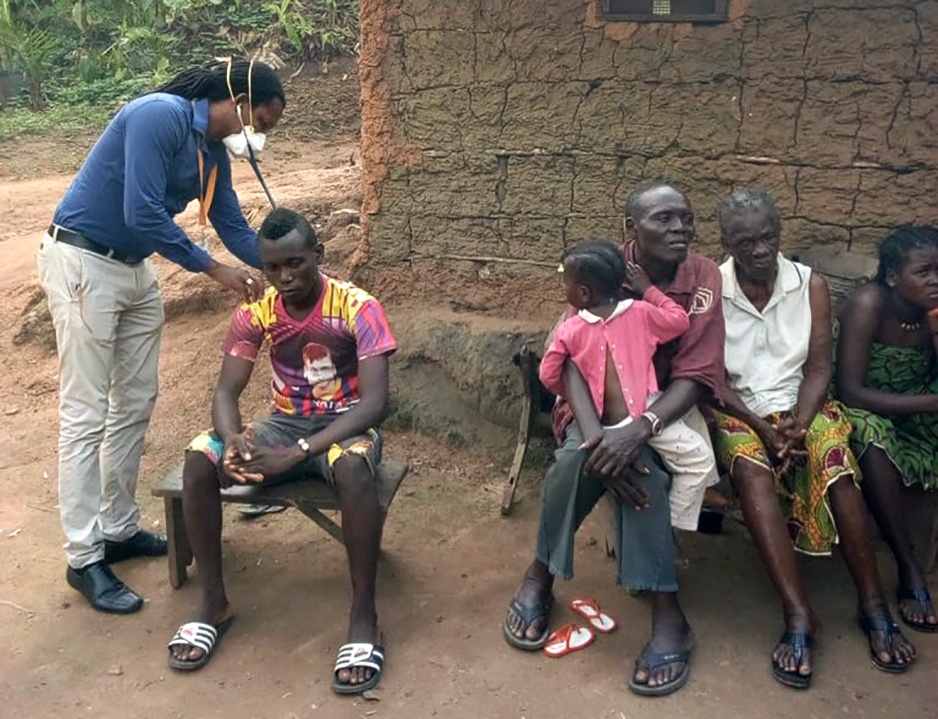 Photo by Nanejae Nagbe / NLTCP
Dr. Maxo Luma checks up on Paul at the patient's home.

Partners In Health community health worker Patricia Mankuah often uses a motorcycle taxi to reach her patients in Harper, a town in remote southern Liberia, and last summer, she frequently hired Paul*, a friendly, trusted 30-something with a reliable motorcycle.

In mid-August, she noticed that he had a persistent cough. Knowledgeable about tuberculosis, she screened him for the airborne infectious disease and accompanied him to PIH-supported Pleebo Health Center, for a free checkup. As it turned out, Paul didn’t just have standard TB. He had multidrug-resistant TB, or MDR-TB, an especially deadly and hard-to-treat version.

Two days later, Mankuah and a specialist visited Paul at his house, to help prepare him for admission to the TB Annex in the capital of Monrovia, the only facility in the country that treated MDR-TB. But Paul lived with, and financially supported, 14 family members in his two-room home, including his pregnant wife. As the family breadwinner he wasn’t about to abandon them for an eight-month, hospital-based, inpatient treatment, and especially not one a day-and-a-half’s drive away.

The decision proved consequential. By sticking with his family even at the risk of infecting them and dramatically shortening his own life, Paul set off a chain of events that would become a landmark in PIH's work with MDR-TB patients.

PIH had set its sights on MDR-TB in the nation of 4.7 million three years earlier. After helping the country beat Ebola, PIH medical staff realized that MDR-TB had become a huge threat. Many patients who had been on treatment earlier had no way to continue during the epidemic, when fears of Ebola caused hospitals to close and drugs to stock out. Many more had simply never had access to the thousands of dollars of pills and injections needed to treat MDR-TB, thanks in part to a national health care budget that can afford to spend just $50 per person, per year. All in all, just 20 of the country’s estimated 430 MDR-TB sufferers were receiving treatment in 2015.

With the encouragement of the National Leprosy and Tuberculosis Program, PIH TB Program Director Dr. Maxo Luma kicked off an MDR-TB program. He, two other PIHers, and a Ministry of Health physician assistant drove through downtown Monrovia looking for patients who were either lost to follow up or otherwise no longer being treated.

Luma and a government counterpart initiated a comprehensive care approach, beginning with transformation of the TB Annex to ensure a dignified space for care. Through intensive case finding and improved linkages to care, bolstered by robust social support programming, the number of patients identified and enrolled on treatment increased, to 120 currently.

Simultaneously, PIH recognized that one treatment facility was not enough. In 2017, in an effort to help decentralize TB care, construction began on a TB ward in PIH-supported J.J. Dossen Hospital, near Harper.

When Mankuah helped discover Paul’s condition, the facility was months away from opening. And of course Paul didn’t want to leave home anyway.

Luma turned to Ernest Cholopray, the deputy program manager of the national TB program. Cholopray advised PIH to go one step further. Treat Paul in his home, he urged.

So they did. On August 28, Luma and a clinician from the National TB Center travelled from Monrovia to Harper. There, staff members from J.J. Dossen—including Mankuah, a social worker, and another clinician—joined them. Together they visited Paul.

After exchanging greetings and pleasantries, they assessed the home’s ventilation and risk of disease transmission, and provided family members and neighbors education and counseling on TB infection control. To maximize the treatment’s odds of success, they also made sure Paul and his family had enough to eat.

Then the team discussed with Paul the treatment plan, including the local clinician who would provide the daily injections and how potential side effects would be managed. Family members showed great support for Paul.

Today, in late March, Paul is just two months shy of completing the first phase of his treatment, well on the way to being the first MDR-TB patient in Liberia ever treated and cured outside of the capital.