'The Core of Our Program:' Likhapha Ntlamelle Leading MDR-TB Outreach in Lesotho 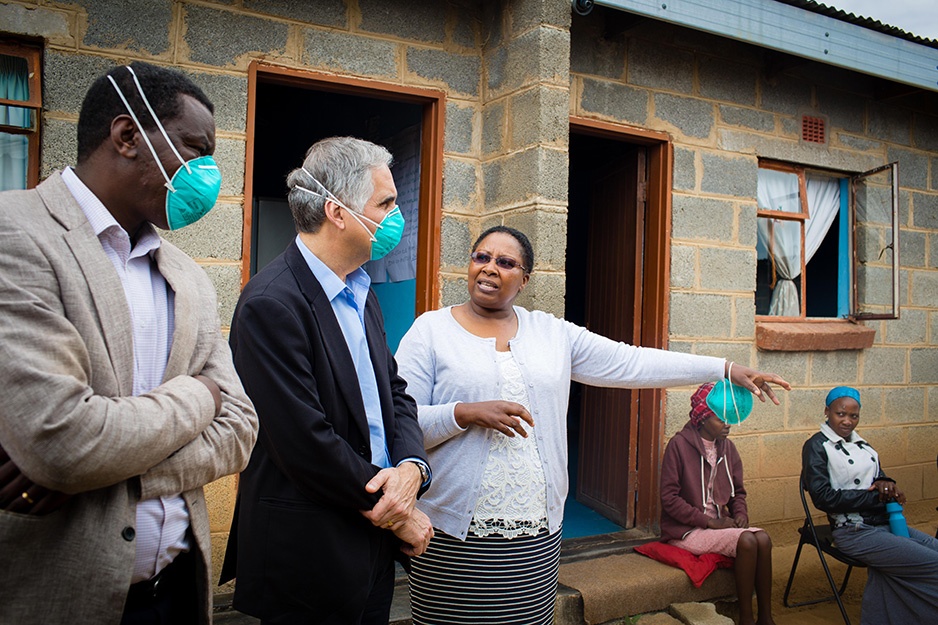 Slowing the spread of multidrug-resistant tuberculosis (MDR-TB) in Lesotho means going to many more places than hospitals and clinics.

Likhapha Ntlamelle, director of community health for Partners In Health (PIH) in Lesotho, has visited them all. Any place with poor ventilation and people in close quarters—whether a crowded prison cell, mine shaft, classroom, or 15-passenger taxi in winter with the windows closed—can increase risks for the airborne spread of TB, which became the world’s deadliest infectious disease in 2015. TB is prevalent in much of Lesotho, a mountainous, largely rural country where many people have to travel for hours, often on foot, to reach the nearest health facility.

Additionally, 2016 data from the World Health Organization shows that Lesotho and nearby Swaziland share the world's highest incidence rate for MDR-TB, a severe, deadly and hard-to-treat form of TB.

That’s why the even-keeled Ntlamelle works tirelessly with her team of six community nurses to conduct regular educational outreach sessions across the country’s 10 districts. They discuss how MDR-TB spreads, its symptoms, and treatment, which can require months of daily injections and thousands of pills over the span of two years. Whether meeting with private businesses, public groups, or individuals, Ntlamelle and her team have a simple message: If you have a significant cough that has lasted for two weeks and suffer from night sweats, fever, and weight loss, it’s time to go to a health facility and get checked for TB.

“This is what we tell everybody in the country,” said Ntlamelle, 57.

Ntlamelle has worked for PIH in Lesotho, known locally as Bo-mphato Litsebeletsong Tsa Bophelo, since 2007, when PIH and the Ministry of Health launched the country’s first MDR-TB program. She usually travels for outreach about two days a week. Ntlamelle spends the rest of her time in the capital, Maseru, at sites including PIH’s main office; the PIH-supported, 24-bed Botsabelo Hospital, which is the country’s only facility for treating drug-resistant TB; and the nearby Malaeneng temporary housing facility for MDR-TB patients.

The fluid, travel-heavy nature of Ntlamelle’s job is very familiar to her. Her mother was a nurse, so they moved frequently and lived in four different districts during Ntlamelle’s youth. Her mother eventually settled in Mohale’s Hoek, and Ntlamelle was married in the northern, highland district of Butha-Buthe.
She’s the mother of two boys, now 26 and 32, and lives in Maseru.

Ntlamelle is a vital leader in Lesotho’s fight against MDR-TB. Her value was evident on a February morning at Botsabelo, when gregarious hospital administrator Mabatloung Mofolo stood outside the community health office. Mofolo often jokes with co-workers and is always ready to laugh, but when she spoke about Ntlamelle’s impact on the hospital, she gave a simple, serious remark.

“The core of our program,” Mofolo said.

That program has seen significant growth over its first decade.

In all, more than 1,600 patients have been enrolled at Botsabelo over the years. The hospital had about 300 active patients as of February. PIH is the only non-governmental organization providing MDR-TB treatment in Lesotho.

“Initially we had very few patients, but now we are seeing more and more patients with MDR being diagnosed,” Ntlamelle said. “That means more and more people are being put on treatment, so that’s cutting the transmission of TB.”

At any given time, about 75 percent of MDR-TB patients at Botsabelo are co-infected with HIV. Co-infection is common among the two diseases, as being stricken with either one weakens the immune system and increases risks of contracting the other.

“With TB you can see people’s lives changing, because they come in sick and they go out cured,” she said. “You go to families and you want to cut the transmission, and you want to see the success rate in the country going up, and reduce the defaulters (people who leave treatment).”

Ntlamelle and her department work closely with Ministry of Health officials and nurses, and with the Ministry of Social Development. They do much of their outreach at the grassroots level.

Ntlamelle and community nurses visit schools to refer children with TB symptoms to health facilities, where they can give sputum samples. They also collect samples door-to-door in the districts of Maseru and Mohale’s Hoek, which have the country’s highest numbers of mine workers and families. Many adult men in Lesotho go to South Africa—which entirely surrounds Lesotho— to work in mines, then contract MDR-TB on the job and potentially spread the disease when they return home.

Ntlamelle said her team also screens workers directly at mines and small quarries in Lesotho, a task that is getting easier as more people learn about MDR-TB, and learn that it can be cured.

“Previously, people would not allow you to (screen them), so society is changing,” Ntlamelle said.

Many MDR-TB survivors in Lesotho have no other choice, though, but to return to the same job where they contracted the disease. Unemployment is between 24 and 28 percent nationwide and “coupled with high inequality and poverty,” according to The World Bank.

She added that when they enroll taxi drivers as patients at Botsabelo Hospital, for example, they inform the driver’s taxi association not only about the driver’s condition, but also when the driver is healthy and able to work again.

Despite the challenges, Ntlamelle is optimistic about what lies ahead for MDR-TB treatment in Lesotho. Botsabelo’s use of bedaquiline and delamanid—the first new TB drugs developed in about 50 years—is showing strong results. The pills soon could eliminate the need for injections as a standard part of treatment.

“The new developments make it exciting and give you hope for the future,” she said.

Ntlamelle sees reasons to be hopeful all the time at Botsabelo.

“You see young children taking treatment, and you see them grow—they are cured, they have families, and their families are TB free,” she said. “It’s exciting to see that.”