Grounded in the principle that health care is a human right, PIH and its Community Tracing Collaborative (CTC) partners accompany immigrants as they navigate the daily realities of a pandemic that discriminates as much as it devastates.

When a Cape Verdean family in Boston was diagnosed with COVID-19, the virus presented more than a health issue. They needed baby formula for their newborn, but could not leave the house due to the isolation period. And as recent immigrants, they had no relatives or social network in the area to support them. They needed help if they were to recover and ensure their baby remained in good health.

Theirs is just one of many cases where the Massachusetts Community Tracing Collaborative (CTC) was able to intervene with social support for immigrants, in this case connecting the family with formula and checking in with them throughout the quarantine period. Launched in April by Gov. Charlie Baker, the CTC is a statewide contact tracing initiative made possible through a partnership among several state bodies, local boards of health, and Partners In Health, which has decades of global experience responding to infectious disease outbreaks.

“It’s really, really critical that when any contact tracing initiative gets launched, to think about particularly vulnerable groups,” says Oscar Baez, a care resource coordinator with the CTC. “It’s been very clear nationwide that this pandemic has laid bare preexisting systemic inequalities.”

COVID-19 has underscored longstanding health disparities rooted in systemic racism. Black, Hispanic, and Native American communities nationwide have been disproportionately infected and killed by the virus due to risk factors (such as a higher burden of chronic health conditions or inconsistent access to health care) caused by decades of racist policies threaded into the fabric of society, from housing and employment to education and health care.

The hardest hit areas are home to not only historically marginalized communities of color but also to immigrant communities who face unique systemic barriers to care.

Grounded in the principle that health care is a human right, PIH and its CTC partners accompany immigrants as they navigate the daily realities of a pandemic that discriminates as much as it devastates.

“Even in a state like Massachusetts and a city like Boston, where we have premier academic and medical institutions, a thriving biotech hub, we haven’t achieved health equity across race and ethnicity,” says Baez. “That is applicable across the United States.”

Massachusetts’ hardest hit communities are home to large immigrant populations, such as Chelsea, Lynn and Lawrence. Chelsea, a predominantly Hispanic city where immigrants form nearly half of the population, has the highest positivity rate in the state. 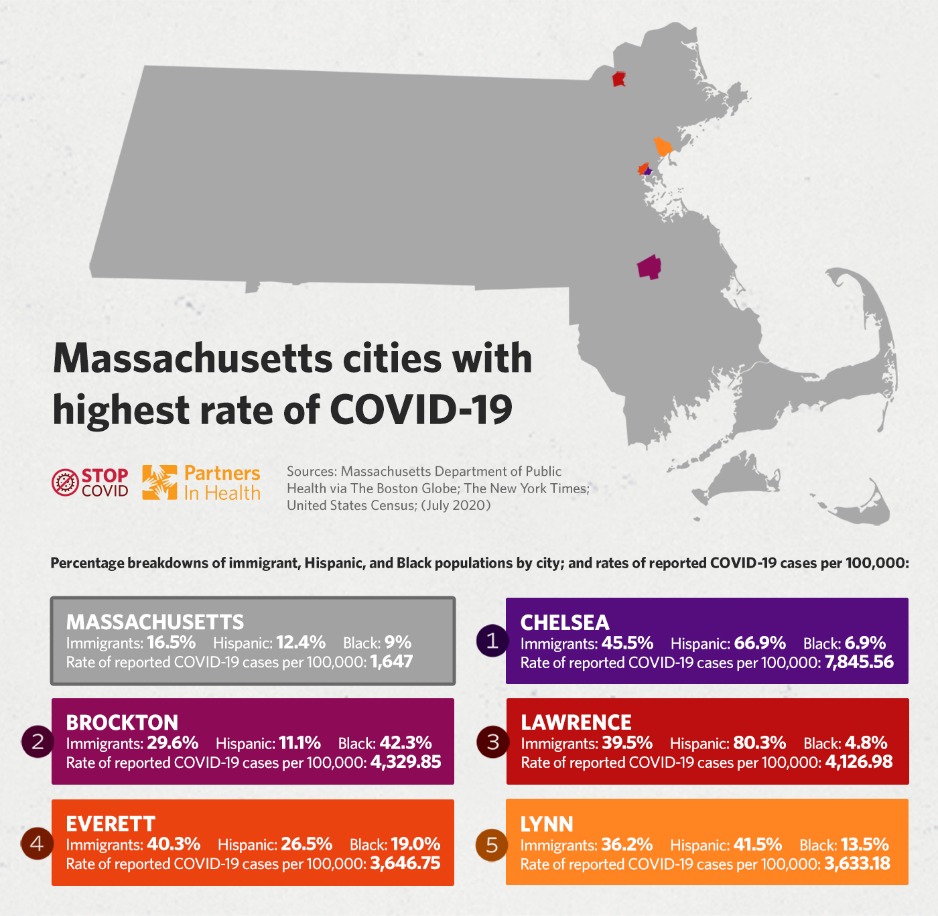 Before COVID-19, immigrants in these marginalized communities already had to navigate a host of systemic barriers in their day-to-day lives, including low-wage work, language barriers and, for undocumented immigrants, the looming threat of deportation.

When the pandemic hit, these social and economic preexisting conditions created “a perfect storm for vulnerability,” says Baez.

The vast majority of immigrants in the workforce are essential workers who cannot perform their job from home. They face increased risk not only at work—where they often lack adequate personal protective equipment—but also on the commute, which typically involves public transit.

For those who live paycheck-to-paycheck, lack well-resourced social networks, and receive few, if any, welfare benefits, a COVID-19 diagnosis—and instructions to quarantine for 14 days—presents far more than a health issue.

When asked to quarantine, many immigrants face a daunting choice—whether to put the little money they have toward rent or food. And for those who share overcrowded apartments with extended family, due to poverty, quarantine is a nearly impossible ask in itself.

The CTC aims to address these challenges with equity-based social support. Care resource coordinators like Baez have connected people with resources ranging from rental assistance to meal deliveries to cleaning products.

The CTC’s Immigration Working Group recently supported an immigrant released from detention who tested positive for COVID-19. They helped the man find housing where he could safely isolate, as well as health insurance and prescription medications.

The CTC has also connected immigrants with mental health support, as many have experienced depression, anxiety, and panic attacks following their diagnosis.

The team helped an undocumented woman, who was a survivor of domestic violence and had struggled with suicidal thoughts in the past, connect with a Spanish-speaking mental health specialist.

As devastating as COVID-19 has been, many immigrants have seen hardship before, from being dislocated from their country of origin due to social-structural violence to the current punitive immigration policies and practices in the United States, particularly for undocumented immigrants from Latin America.

“When we talk about immigrants, we tend to think about victims. They are survivors rather than victims,” says Humberto Reynoso, a care resource coordinator. “They confront the hardships in both their country of origin and the US.”

With each call, Reynoso aims to provide a listening ear and connect people with culturally relevant resources.

PIH approaches contact tracing as a form of accompaniment, similar to how community health workers around the globe support patients in need. To that end, the CTC trains contact tracers to take immigration considerations into account in every interaction—specifically, legal, linguistic, financial, and digital barriers.

Language has been essential to providing that accompaniment. Nearly 40 percent of households in Boston speak a language other than English at home. In Chelsea, that number jumps to 70 percent.

The CTC works with translators and multilingual staff to converse with immigrants in the language they are most comfortable speaking. Baez—who speaks multiple languages—estimates that 90 percent of his phone calls are conducted in a language other than English, mostly in Spanish and Portuguese.

The CTC also partners with local organizations with deep ties to the communities, building trust and finding relevant solutions, such as culturally appropriate foods at a food bank.

For many CTC staff, the work hits close to home.

Berlyn Olibrice, a care resource coordinator originally from Haiti, has worked on several cases in the state’s Haitian American community and has seen people hesitate to get help due to the stigma surrounding coronavirus.

“In my role, I try to navigate that with people and tell them, ‘It’s okay to seek help within your own community,’” says Olibrice, who speaks Haitian Creole and Spanish. “We are not going to judge you because you have this virus. Local organizations are there to support you.”

Baez, too, brings first-hand expertise to his work, having immigrated to the U.S. from the Dominican Republic as a child. He once handled a call that came from a public housing building across the street from where he grew up. The caller had tested positive for COVID-19 at the same community health center where he went for physicals as a child. 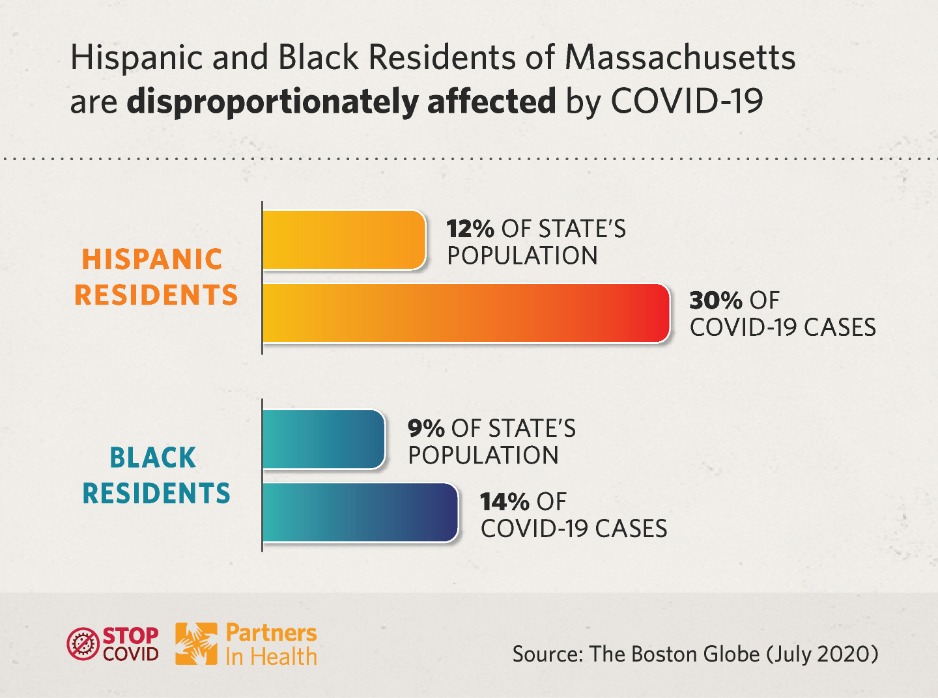 While the CTC’s work spans Massachusetts, it has focused its efforts where the virus has done the most damage and where it is most urgent to track the disease and stop the spread; these areas have disproportionately included immigrant communities.

Contact tracing is an entirely confidential process and participation is voluntary. Contact tracers do not ask about immigration status. No information is disclosed to the public or shared with other government agencies, including law enforcement. However, misinformation about the process has led to privacy concerns.

These concerns are especially heightened in immigrant communities, where undocumented immigrants live with the constant threat of deportation and those with green cards fear losing access to public benefits.

As a result, many immigrants are reluctant to pick up the phone when an unfamiliar caller ID appears, much less divulge personal information such as their contacts.

To address these concerns, contact tracers assure patients—sometimes, with the help of a translator—that all information is confidential and migration status will not be shared with anyone.

The CTC has also launched awareness campaigns, creating flyers and online resources in several languages to educate the public about contact tracing and dispel common myths. Additionally, it has partnered with local community organizations, health centers, and city councils to host virtual town halls in various languages, including Spanish.

“Trust is our greatest currency in this fight,” says Baez. “We really need trust, even in environments of fear, to get through this together."