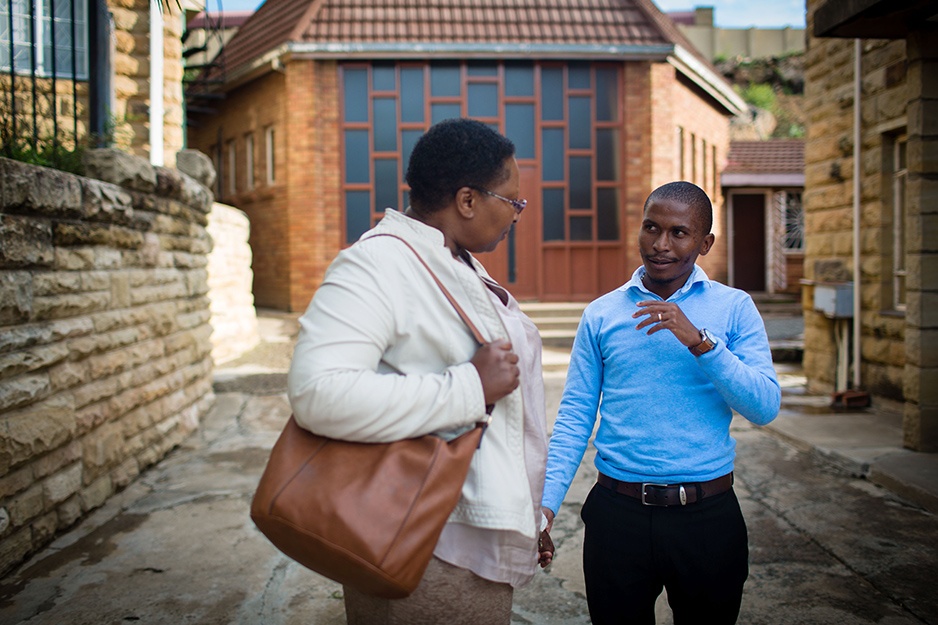 Photo by Cecille Joan Avila / Partners In Health
MDR-TB survivor Moeketsi Ts'osane (right) talks with Likhapha Ntlamelle, community health director for Partners In Health in Lesotho, in February 2018. Standing outside of the church in Maseru where he works as an accountant, Ts'osane said his positive mindset and dedication to treatment helped him conquer MDR-TB.

A severe form of tuberculosis killed Moeketsi Ts'osane’s mother in 2008, and one of his brothers in 2010. Health workers suspect the disease may also have contributed to the 2005 death of Ts'osane’s father, who had worked as a miner in South Africa.

So when Ts'osane was diagnosed with MDR-TB himself, in 2015, his family and friends had grim hopes for his future.

“The people around me, because of what had happened…to them, it was the end of me,” the 29-year-old Ts'osane said in February, sitting at work in Maseru, the capital of Lesotho.

The only person who didn’t give up hope was Ts'osane.

“I had to make it,” added Ts'osane, who is married with a young daughter. “I had to.”

That kind of positivity exudes from Ts'osane, a slim, engaging accountant for the Oblates of Mary Immaculate, a Christian missionary organization. He said he’s an avid reader, frequently listens to motivational speakers and tries to interact with positive-minded people—foremost among them is his wife, Ts'epang Faats'e Ts'osane.

So, when Moeketsi Ts'osane tells you he firmly believes that, “the positivity I put in made a lot of difference” in battling MDR-TB, you listen. Because this is someone who had to overturn recent history, change the perceptions of friends and loved ones, and save himself from a deadly disease that had taken two members of his immediate family, if not three.

The risk for his father would have been significant. South Africa has the world’s highest rate of TB, at 781 people infected per 100,000, according to 2016 data from the World Health Organization. That could be largely due to the mining industry, which is large in South Africa and an ideal incubator for TB, which spreads through the air and can be rampant in crowded, poorly ventilated spaces such as mines.

The country’s incidence rate is followed by that of Lesotho, a mountainous, largely rural kingdom that’s entirely surrounded by South Africa. Lesotho’s rate for TB, the world’s deadliest infectious disease since 2015, is 724 people per 100,000.

When it comes to multidrug-resistant tuberculosis (MDR-TB), the devastating strain that killed Ts'osane’s mother and brother, Lesotho again is at the top, sharing the highest incidence rate in the world, of 49 people per 100,000, with nearby Swaziland.

That means that of Lesotho’s total population of about 2 million, nearly 1,000 people are battling MDR-TB. The good news is that their chances of survival now are much better, and getting increasingly better, than they were just a decade ago.

Ts'osane is an example of why.

Likhapha Ntlamelle, community health director for Partners In Health (PIH) in Lesotho, said Ts'osane’s mother was one of the first MDR-TB patients treated at Botšabelo Hospital. The Maseru hospital is the headquarters of Lesotho’s first National MDR-TB Program, which PIH operates in its role supporting the Ministry of Health.

PIH is known in Lesotho as Bo-mphato Litšebeletsong Tsa Bophelo. Ntlamelle has worked for PIH since 2007, when the National MDR-TB Program began. In addition to her work at Botšabelo, she and her team of community nurses conduct educational outreach about MDR-TB across the country. She knows Ts'osane and his family well, and said that when his mother came to Botšabelo a decade ago, her MDR-TB was so far along they were unable to save her life.

His brother also had one of the worst forms of MDR-TB, a kind that affected his brain, Ntlamelle said.

Ts'osane has two other siblings, a brother and sister who live in Maseru with their grandmother. Among all of his family members, Ts'osane said, his grandmother felt the greatest impact from what MDR-TB had done to them, and from what it could do, after Ts'osane’s own diagnosis.

“It was very emotional for her,” he said.

Ts'osane had visited his mother and his brother at Botšabelo when they were patients there. Given his family’s health history, and the mental and emotional trauma it had brought, health staff expected challenges when Ts'osane began the grueling MDR-TB treatment himself in 2015.

“We thought we would experience more problems with him,” said Tseko Motsela, a community nurse at Botšabelo.

Instead, the opposite occurred. Buoyed by dauntless positivity and the timely advent of new TB medicines, Ts'osane persevered. Ntlamelle said he was one of the first patients at Botšabelo to be treated with bedaquiline and delamanid, the first new TB drugs developed in about 50 years.

He took pills daily, went for monthly checkups at Botšabelo for hearing, vision, and ECG tests to monitor his heart rate, and suffered side effects including rashes and nausea. Otherwise, Ts'osane told PIH staff in 2016, “it’s just normal.”

Two years later, in a seating room of the church office where he works, Ts'osane said lingering effects have been minimal.

“My legs are still a bit sore,” he said. Despite some aches, he plays in a recreational soccer league for fun.

“It really makes me very, very happy to see him,” Ntlamelle said. “People tend to think everybody who has MDR-TB will pass away. (Now), when we say MDR-TB can be cured, they know it’s true.”

Ts'osane said he especially wants his nearly 3-year-old daughter, Bohlokoa, to know that’s true. He plans to talk with her about MDR-TB when she gets older.

“She has to be aware,” he said. “Definitely, I am going to talk to her. She has to know that if she gets sick, she is going to be OK.”

Bohlokoa already has proven that she can fight through diseases, too. Ts'osane said his daughter was diagnosed with TB, a non-MDR strain, when she was 9 months old. She successfully completed treatment six months later.

"I think she is tougher than me," Ts'osane said.

“I think his story could impact others who are demoralized,” he said.

So could his energy and outlook.

As Motsela, Ntlamelle and others pulled away from Ts'osane’s workplace that day in February, two days after he turned 29, Ts'osane ran up to the van’s window, waving. He was holding a green facemask, the kind that MDR-TB doctors and nurses wear when around patients indoors, or in close quarters.

Motsela had left his mask inside, after wearing it with other patients earlier in the day. Ts'osane wanted to return it—after all, it was not something he had much use for lately.