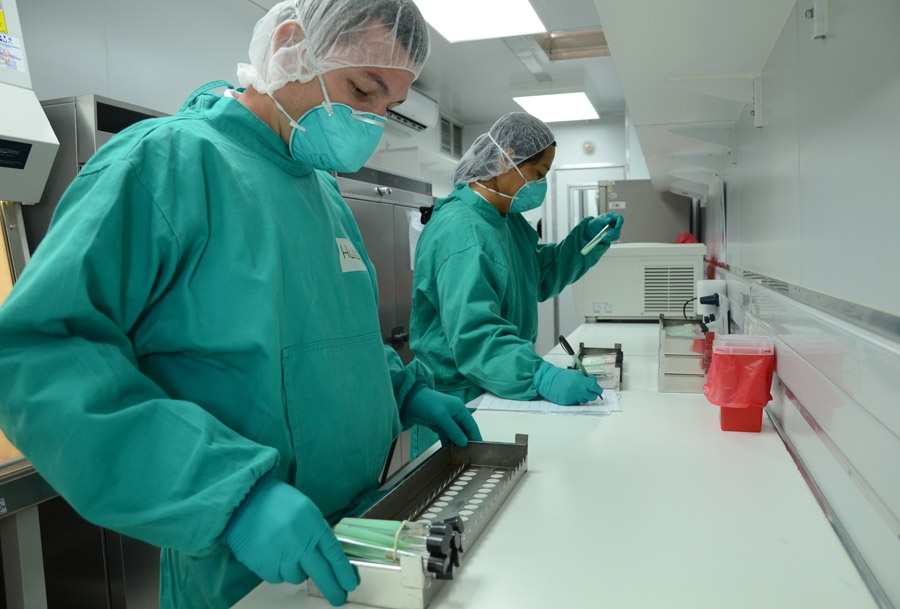 Tuberculosis is the most deadly infectious disease in the world, killing 1.8 million people in 2015 alone, yet little is known about why exposure to the airborne disease sickens some people and not others.

Harvard researchers think diet may be key to TB transmission. According to an article published in Clinical Infectious Diseases in May, people with low levels of vitamin A were at least 10 times more likely to develop TB after exposure to the disease than those with higher levels. Increasing consumption of vitamin A—found in carrots, sweet potatoes, dairy, meat, and supplements—could be a powerful tool in disease prevention.

Dr. Megan Murray, the Ronda Stryker and William Johnston Professor of Global Health at Harvard Medical School, and her team of investigators discovered this link as part of an epidemiological study of TB among people living in Carabayllo and surrounding districts north of Lima, Peru. Staff from Socios En Salud, as Partners In Health is known locally, were essential for recruitment, patient follow-through, and blood sample collection and analysis of the 12,000 participants over five years.

We spoke with Murray, PIH’s director of research, about the surprise findings, why adolescents with low vitamin A levels are particularly at risk, and what the vitamin A link means for TB prevention.

How did your team arrive at this discovery?*

Households in Carabayllo were recruited when somebody developed TB, so we knew that we were looking at a population that was relatively high risk. Among the 12,000 household contacts, about half had given a blood sample. We checked to see if people had undiagnosed TB at the time that we drew their blood. Then we followed people for infection, and then for disease. With TB, those are different. Lots of people were already infected. About half of the people who weren’t, became infected within the next 12 months—probably because of exposure. About 2 percent of the people developed active TB. We took those cases and matched them to people who were just like them in terms of age, gender, and other factors, but who hadn’t developed TB. Then we compared their vitamin A levels, and they were really different.

Were you surprised by that difference?

We were just stunned. We were actually interested in vitamin D. People had been speculating for many years that low vitamin D is associated with TB risk, based on a seasonal pattern. The argument is that the disease starts to progress in the summer and takes five or six months to manifest. We were following that up, but then we had some data from a previous study that Dr. Molly Franke, an assistant professor at Harvard Medical School, had done in kids that showed that fruits and vegetables, in a case-controlled study, were protective against TB. We thought, ‘Well, let’s throw in some fruits and vegetables that seem to be associated with various vitamins.’

We were just stunned.

It turns out that vitamin A is only minimally associated with fruits and vegetables; it’s actually more in dairy and meat. When we got this result—that contacts with low levels of vitamin A were at greater risk for developing active TB, we were like, “Whoa, that can’t be right.” We looked for every possible reason why it might not be right, but we do think it is right.

The 10-fold factor is striking. Can you put that in context?

It’s huge. The strongest risk factor that we know is between smoking and lung cancer. That’s a 20-fold risk. It’s not a great example, because it’s so extreme that it’s way out of the normal ballpark. When you think about something like smoking and heart disease, you know it’s a very strong link. A ton of the heart disease in the world is caused by smoking. But it only doubles the risk. As epidemiologists and public health people, we’re interested in odds that are as low as 1.1, which is a 10 percent increased risk. We’re talking here about 10 times or 20 times the risk.

Vitamin A-deficient adolescents had up to 20 times the risk of developing TB. Any idea why?

We know that TB rates are higher in that age group than in any other age group. As kids move into puberty, from 10 to 20 years old, they’re at enormously high risk. We don’t really know why that is.

Adolescent health is not something that is well studied, especially around immunity. We do know that there’s some infectious diseases that are much worse in adolescence. Because of the growth spurt, they have very different metabolic demands and processes.

Vitamin A deficiency is prevalent among 30 percent of the population in low- to middle-income countries. Why is this?

I’m assuming it’s because of diet. If you think about it, it’s in dairy, meat, and fish. These aren’t very common in our diet. And the poorer the country, the less vitamin A you’re going to get.

To support these recent findings, your team is now helping design a study to test vitamin A supplementation among guinea pigs exposed to TB. How far along are you, and do you see anything promising?

Our collaborators at the University of Colorado—Fort Collins set up a nice guinea pig model in diabetes. They can make guinea pigs diabetic and then see what happens with TB. One of the questions we’ve been asking is, ‘What effect do drugs routinely used for diabetes have on TB?’ They’re on to some very interesting stuff suggesting that some of the anti-diabetes drugs could be useful in controlling TB, regardless of whether you’re diabetic or not.

When we learned this about vitamin A, I asked them if they could set up a similar project. They designed it, and we are waiting minute-by-minute for NIH funding. We’ll be ready the minute they say, “Go!”

So how long will it be before we test a vitamin A intervention in humans?

We can try it today, because this is something we know is good for people. We don’t need animal results to proceed with a trial here. We know that people who are vitamin A deficient should be given vitamin A, regardless of their TB risk. The trial that we’re envisioning is really about whether people at risk for TB should be screened for vitamin A. If they were low, we would treat it.

What do you hope will come about as a result of this publication?

I’ve had people say, ‘Why bother with a clinical trial? Let’s just give everyone vitamin A.’ I agree with that to some degree. In the U.S., we don’t recommend people who are not vitamin A deficient to take it. People take enormous doses of vitamins, and they can actually take too much vitamin A. To get people on board and to have TB programs start thinking this is a good approach, having some evidence that it’s useful is going to be good.

The poorer the country, the less vitamin A you’re going to get.

If you live in the U.S. and somebody in the household has TB, you get screened by the public health department. They come and do a skin test for TB and, if you have it, you get six to nine months of a preventive drug. We’d like to do that in lower resource settings. But some countries say, ‘Our TB burden is just too high. We can’t give half our population these drugs.’

The nice thing about vitamin A is that it’s good for other things besides TB. There’s a lot of interesting research going on right now on the relationship of vitamin A and general immunity.

*This interview has been edited and condensed.