As Liberians celebrate Mother’s Day throughout May, on different dates according to different religious leaders and churches, one new mother in particular is thankful for her first child and newfound joy.

Because for Jacqueline Bedell, 23, motherhood did not come easy.

Bedell was six months pregnant when she visited Pleebo Health Center, one of the facilities supported by Partners In Health in southern Liberia’s Maryland County. Pleebo District is home to more than 55,000 people, who visit the health center for care and treatment in areas ranging from hypertension and diabetes to tuberculosis, HIV, and emergency needs.

Bedell was visiting for her regular prenatal checkup, part of the health center’s maternal and child health services. Her visit became far from routine, though, when clinicians diagnosed Bedell with preeclampsia, a condition associated with high blood pressure during pregnancy.

Helping pregnant women receive prenatal care and give birth in a health facility, rather than at home, makes deliveries much safer and vastly improves maternal and child health. 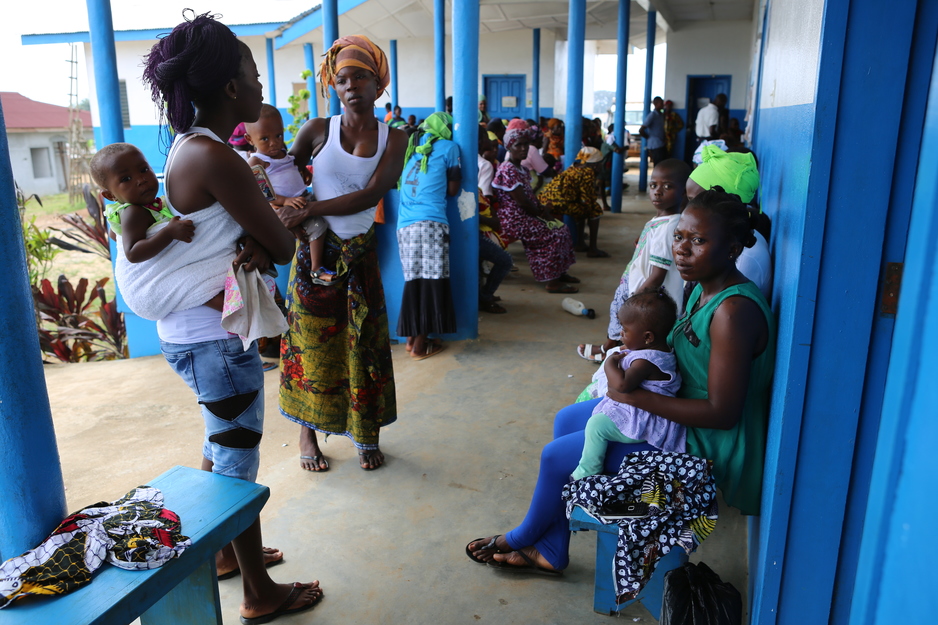 Women wait to receive prenatal care in the outpatient clinic at PIH-supported Pleebo Health Center. From 2016 to 2018, PIH saw a 21 percent increase in facility-based deliveries across Maryland County in Liberia, one of the most dangerous countries in the world to give birth.

Medical staff immediately referred Bedell to J.J. Dossen Hospital, another PIH-supported facility in Maryland County, for an emergency cesarean section to save herself and her baby.

In 2019, clinicians at J.J. Dossen Hospital performed an average of 45 surgeries per month, including an average of 21 life-saving cesarean sections.

So the medical team at J.J. Dossen was ready to help Bedell safely deliver a preterm baby girl. But her newborn daughter had a very low birth weight, of just more than 1 kg, or about 2.2 pounds. Her low weight caused the baby to also suffer respiratory distress and other medical conditions. Staff quickly admitted her and Bedell into the hospital’s neonatal intensive care unit (NICU) for monitoring and critical care.

“When the doctors told me I had to undergo an operation, I was so afraid for my life and my baby,” Bedell said. “But the doctors, nurses and midwife explained to me the importance of the operation. They encouraged and assured me that my baby and I would be safe, which made me relieved. The operation was successful, but my baby was so small that, even as her mother, I was afraid to touch her.”

On admission to the NICU, staff put Bedell’s newborn daughter into an incubator to regulate her temperature and protect her from infections, while providing her with antibiotics and care.

Johnette Clarke, J.J. Dossen’s pediatric ward supervisor, said that in spite of the challenges involved with a significantly premature birth and low weight, the team was determined to ensure Bedell’s baby survived.

“Although there were days the healing process seemed so prolonged, coupled with the baby’s resistance to several medications, we never gave up,” Clarke said. “We kept on working together as a team, relentlessly, to provide the best care for mother and child.”

That care took some time—Bedell and her newborn daughter, named Merab Blay, remained at J.J. Dossen for 77 days after Merab’s birth. But Bedell used that time not only to learn valuable techniques for caring for her first child, but also to inspire and motivate other mothers and newborns in the NICU with her.

After delivery, the medical team introduced Bedell to kangaroo mother care, a practice that enables mothers to care for their babies and improve their development through consistent skin-to-contact, which helps infants regulate their body temperature. J.J. Dossen’s kangaroo care program is used especially for preterm babies to better protect them from infection and includes support and training for early breastfeeding.

Staff teach new mothers like Bedell how to feed their babies regularly and on a schedule, and to promptly notify a doctor or nurse if any concerns arise.

Determined to return home with her baby girl healthy and strong, Bedell showed a dedication to kangaroo care that rubbed off on other new mothers in the ward. She encouraged them to apply the technique so passionately and often, in fact, that other new mothers came to affectionately referring to Bedell as their president.

Through that consistent care, Merab’s weight increased by nearly 2 pounds and, after 77 days, Bedell was able to bring her baby daughter home.

But that doesn’t mean their care has ended. Bedell and Merab are enrolled in J.J. Dossen’s pediatric development program and receiving weekly home visits from community health workers and nurses, who monitor Merab’s weight and breastfeeding, ensure that kangaroo care is continuing for at least seven hours a day, and address any concerns Bedell might have.

Delighted about the progress made so far, staff at J.J. Dossen recently organized a ceremony at the hospital to recognize Bedell’s commitment during her and Merab’s stay. Dr. Rebecca Cook, PIH Liberia pediatrician, commended Bedell during the farewell ceremony for not only caring for her baby, but also leading and helping other new mothers care for their own.

Bedell shares hospital staff’s appreciation for her—so much so that her daughter’s name, Merab, is in honor of Merab Nyishime, PIH-Liberia neonatologist at J.J. Dossen.

At the ceremony, with members of her family in attendance, the happy new mom received gifts from hospital staff for Merab, and the team composed and sang a new song—titled, “I am Proud to be a Mother.”