PIH calls for equitable vaccine distribution that prioritizes most at-risk

Supporters of the People's Vaccine participate in a protest in the Kendall Square neighborhood of Cambridge, Massachusetts, which is known for its concentration of pharmaceutical and biotechnology companies. Photo by Zack DeClerck / PIH.

As the race for a COVID-19 vaccine nears the finish line, questions loom about who will receive the vaccine—and who won’t.

COVID-19 has presented an unprecedented global crisis, leading to more than 65 million cases and 1.5 million deaths worldwide. While vaccines could be widely available in the United States as soon as April, vaccines won’t be available for billions of people around the world until as late as 2022 or even later. It could take up to four years to produce enough doses to vaccinate the global population. And it’s likely to be an uphill battle.

Partners In Health stands in solidarity with global organizations and leaders, including former labor secretary Robert Reich, Chelsea Clinton, and Nobel laureate Joseph Stiglitz, calling for a “People’s Vaccine”—a vaccine that is made free and accessible to all people around the world. In November, PIH leaders signed an open letter urging the incoming U.S. presidential administration to ensure that the vaccine, likely from among the candidates developed by American companies, is made available to all.

“The People’s Vaccine letter is really about pushing President-Elect Joe Biden to not just commit to access for those in the U.S., but also to make sure that everyone across the globe can have access to a vaccine if it’s developed by a U.S. company,” says Justin Mendoza, PIH’s advocacy manager. “Without action from world leaders, the vaccine will leave far too many behind.”

That would come as a reversal of course for the U.S., which under President Donald Trump’s administration publicly rejected COVAX—the global initiative to develop, manufacture, and distribute the COVID-19 vaccine in bulk at low-cost—and instead prioritized vaccine access for its own population, investing in five candidates through Operation Warp Speed. Even wealthy nations part of COVAX have been buying up the world’s supply of vaccines, leaving impoverished countries behind.

The letter warns that, if the usual protocols for global vaccine distribution are followed, masses of people would lack access to the COVID-19 vaccine, putting millions of lives at risk—and prolonging a devastating pandemic.

Among its demands, the letter urges the incoming Biden-Harris administration to ensure that vaccines are sold at affordable prices, so governments around the world can provide protection to people for free.

It also calls on the future administration to guarantee that vaccine technologies and know-how are shared rather than sealed off with patents and other intellectual property—an approach that would allow more companies to manufacture vaccines and increase the world’s vaccine supply more quickly.

And it urges the incoming administration to ensure equitable global distribution of the vaccine, prioritizing those most at-risk, including health care workers, the elderly, and the chronically ill, as well as communities disproportionately impacted by COVID-19. This would be accomplished through policies that build out a vaccine distribution approach that encompasses planning and resource allocation, community mobilization, vaccine delivery, and individual and community follow-up.

Wealthy countries are buying up the world’s supply of vaccines. The U.S. could eventually control 1.8 billion doses, about a quarter of the world’s near-term supply, according to Duke University researchers—stockpiling and buying more vaccine doses than it could possibly use. COVAX lacks the funding and resources to produce the staggering amount of vaccines needed worldwide. And the vaccine may be too expensive for low- and middle-income countries to afford to buy in bulk and distribute for free to their populations.

In recent years, the cost of drugs in the U.S. has soared, leading nearly 1 in 3 patients to find alternatives to filling their prescription, including skipping doses, switching to over-the-counter drugs, cutting pills in half, or not filling the prescription entirely. This is further exacerbated at the global level, where cost remains a barrier to medicines access for an estimated 2 billion people worldwide.  Despite the fact that billions of U.S. taxpayer dollars funded vaccine development, some drug-makers have announced plans to profit from COVID-19 vaccines—sparking widespread criticism.

“The current vaccine regime and the way that we design, sell, and manufacture them around the world leaves low-income communities and those who are most vulnerable to COVID-19 at the very bottom of the list of priorities,” says Mendoza. “We’re trying to really urge decision-makers to shift those priorities and help us stop COVID-19 by protecting the most vulnerable.”

In the U.S., too, protecting the most vulnerable will be essential in ending the pandemic. COVID-19 has disproportionately impacted Black, Indigenous, and Latinx communities due to centuries of systemic racism that have put out of reach equal access to health care, education, housing, and transportation. It has also run rampant in the nation’s prisons, jails, and detention centers.

PIH’s support for a free and fair COVID-19 vaccine stems from its more than 30 years of advocacy for health care as a human right—from early days fighting the HIV/AIDS epidemic in Haiti to the current battle against multidrug-resistant tuberculosis around the world. 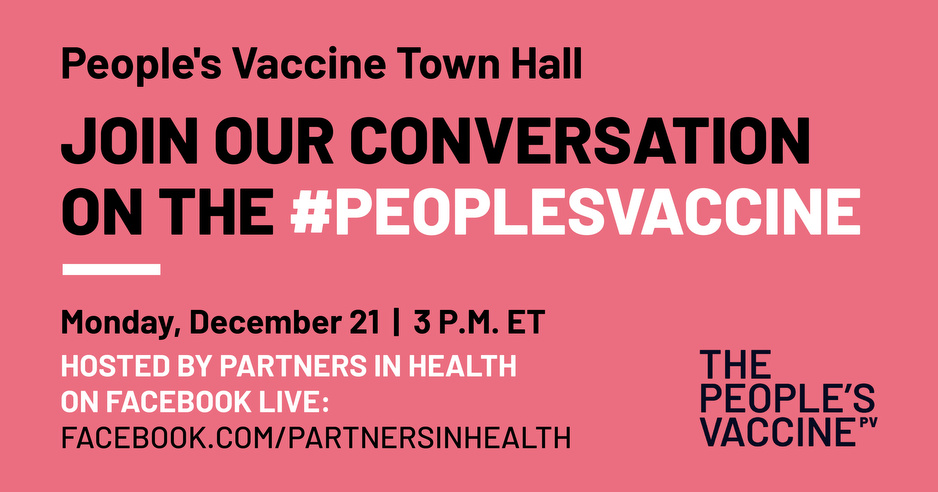 To stop COVID-19, we must build health care systems that leave no one behind—in the U.S. or abroad. Join our town hall conversation on the People’s Vaccine on December 21 at 3 pm ET. Follow us on Facebook to be notified when the event starts!

Show your support for the #PeoplesVaccine