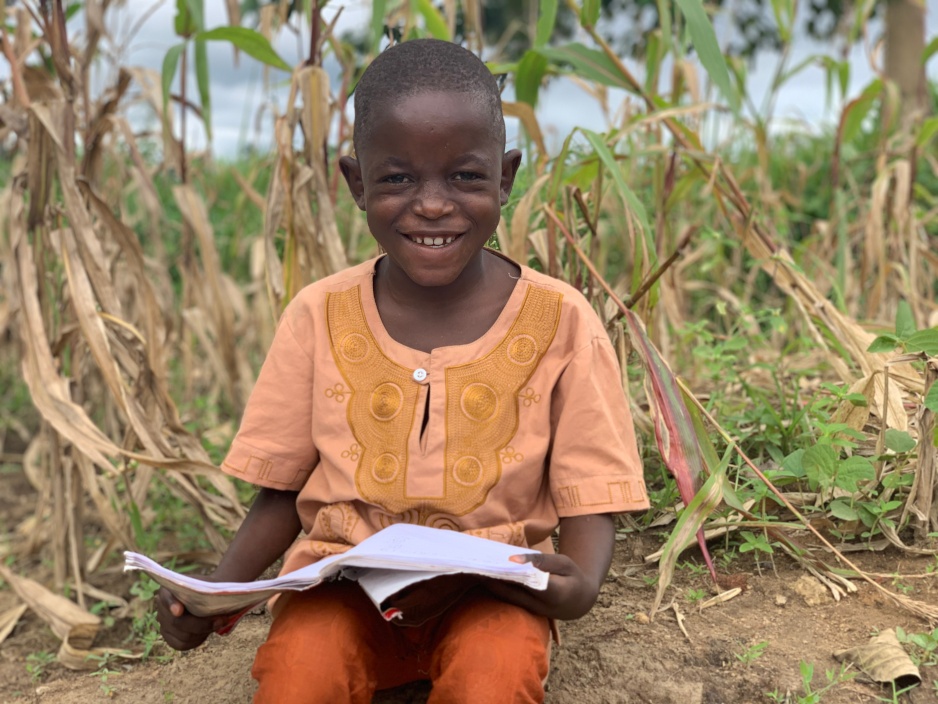 All photos by Justine Nancarrow / for Partners In Health
Emric Ansu, 10, lost both his parents to HIV when he was 3 months old. His aunt, Massah, has cared for him since, along with five children of her own. Emric is HIV positive and needs antiretroviral medicines to stay healthy, but there isn't always enough food at home to support his treatment. Partners In Health began helping the family earlier this year, providing free medicine, health care, food supplies and more. Emric now has rejoined his friends for a new school year, and said he's excited to return to the classroom.

On a rainy July day in Sierra Leone, children across the country walked to their local schools with pencils in hand, to take their end-of-year exams. If they passed, they would be accepted into the next grade level when school returned in September.

As children and young adults all around the world know, summer goes by fast, and many of those students now are beginning the new school year. But for students served by Partners In Health, challenges far greater than final exams could have stood in their way.

PIH has worked in the West African nation since 2014, when responding to the Ebola outbreak was the immediate need. But through a continuing partnership with the national government, PIH's role has only grown. Staff now supports comprehensive care for a population of more than 500,000 in the country's eastern Kono District, with two health facilities and more than 100 community health workers reaching families in their homes, every day. PIH also supports national tuberculosis and mental health programs based in two facilities in the capital, Freetown.

In all of its work, PIH knows comprehensive care extends beyond physical health. That's why PIH also provides social, mental, and economic support, to help people, families, and communities thrive. Ensuring children can return to school after illness is a vital part of that care. Here, four children and young adults who have faced vast challenges—such as HIV, TB, and diabetes—share their stories and their spirit. And, as September arrives, they share their excitement to get back to school.

In a village just outside of Koidu, 10-year-old Emric Ansu hides shyly behind the entrance of the home he shares with his aunty, Massah, and five cousins. But as soon as he sees the familiar faces of PIH community health workers arriving, he runs outside with a smile to welcome them.

Emric had lost both of his parents to HIV by the time he was just 3 months old. Massah immediately made the 155-mile journey to Freetown to collect him, and has cared for him since. Sitting outside their home, she briefly paused to go inside, and returned with a crumpled photo in a plastic sleeve.

“This is my brother, just before,” Massah said.

Across Sierra Leone, HIV still carries a heavy weight of stigma. But that didn't deter Massah from doing everything she had to do to save Emric’s life.

As soon as he was in her care, she had him tested for HIV. The results came back positive. In Kono District at that time, a decade ago, HIV treatment wasn’t easy to come by, let alone pay for. But Massah repeatedly found ways to ensure Emric had the antiretroviral medication he needed to survive. Those efforts became increasingly difficult, though, as Massah started her own family—today, she’s raising five of her own children along with Emric, on her own, while also supporting her mother, who suffers from disabilities. Earlier this year, PIH stepped in to help, providing free medication and health care to make sure Emric could continue his treatment and stay in school.

“It’s always hard,” Massah said. “Sometimes we don’t have enough food for the family, and when Emric can’t eat I don’t give him his medication, because without food it’s too strong and it makes him sick.”

PIH’s Acute Needs Program is designed for this kind of situation, and provides cash or food supplies to enable patients like Emric to stay on medication.

Emric turned 10 this summer, a milestone for any child. But in Sierra Leone, most families don’t have the means to celebrate every year and instead recognize birthdays every five years, if they can.

John Suluku, manager of the Acute Needs Program for PIH in Sierra Leone, recently visited Emric and asked to see some of his schoolwork. The energetic youth ran inside to collect it and returned moments later, holding a small notebook with Manchester United footballer Paul Pogba on the cover and “Exam Book” written at the bottom.

Emric’s dream is to be a doctor, but for now, what he loves most is exactly those two things—football and writing. He said he's not nervous at all about returning to school in his village.

“I love school. I’m excited," Emric said. "My best friend is Philip. He’s not in my class, but we play together.”

Bintu Bailor, 17, sat on the doorstep of her family’s home earlier this summer with her sister and cousins, in their home village near Koidu, waiting for PIH community health workers to arrive for their regular visit.

They had been seeing the health workers often. Two months prior, just weeks before Bintu’s end-of-year exam, she was diagnosed with TB at PIH-supported Koidu Government Hospital.

Immediate treatment and support got her back on her feet. Bintu had a short hospitalization at Koidu, and took the exam just days after her release. She passed.

“Now I can be in secondary class one when we go back to school next month,” she declared proudly on that day earlier this summer, at her family’s home. “I just love to study, even when I’m not at school. I really like math.”

Her care has continued. PIH supports Bintu with transportation to and from the hospital, for medicine refills and regular checkups. The experience has left a lasting impression on Bintu.

“I’m feeling much better,” she said. “Now, I want to be a nurse and work for PIH. I like the way people treat me in the hospital when I go there. That’s why I want to study to become a nurse.”

Anita Bungura sat patiently with her parents on a July day, on a bench outside the non-communicable disease clinic at Koidu Government Hospital, waiting to see the doctor.

“I wanted to drink a lot of water and needed to go to the bathroom very often,” Anita recalled.

In November, Anita and 20-year-old Joshua Kamara became two of the first patients in Sierra Leone to be diagnosed with, and treated for, type 1 diabetes. In a country with a high prevalence of infectious diseases such as HIV and TB, patients like Joshua and Anita—with non-infectious diseases—often had gone unnoticed.

During initial treatment, PIH provided transportation to and from the clinic for Anita and Joshua twice every day, so they could get insulin and blood sugar checks. The support saved their lives.

Gradually, PIH doctors taught Anita and Joshua to administer lifesaving insulin and check their blood sugar levels on their own. PIH staff also arranged for Anita’s insulin to be stored at a local clinic, where it could be kept cold, and provided Joshua with a clay pot to store his insulin and keep it cool, as well. Community health workers have continued to make regular home visits to each family, and both Anita and Joshua were able to return to school this spring.

Six months after his diagnosis, Joshua graduated from secondary school—an achievement he had long thought was out of reach.

“When my father died in 2010, I had to look after myself by doing labor to get myself food. I had given up hopes of completing school,” Joshua said. “I didn’t know about diabetes before, but (a PIH doctor) taught me about it. He showed me how to use a syringe, the amount of insulin I needed to use in an injection, and how to measure my sugar levels.”

With his health vastly improved, Joshua now hopes to continue his education even further.

“I used to lie in bed and feel like I was going to die,” he said. “But I feel happy and good now. Getting a good education is the way forward for me. That is my priority.”

The support from PIH has given Anita dreams of a bright future, as well.

“I’m in Form Three now and I want to be a nurse," she said. "I have learned a lot from the nurses and I feel a lot better now, so that’s what I would like to become.”