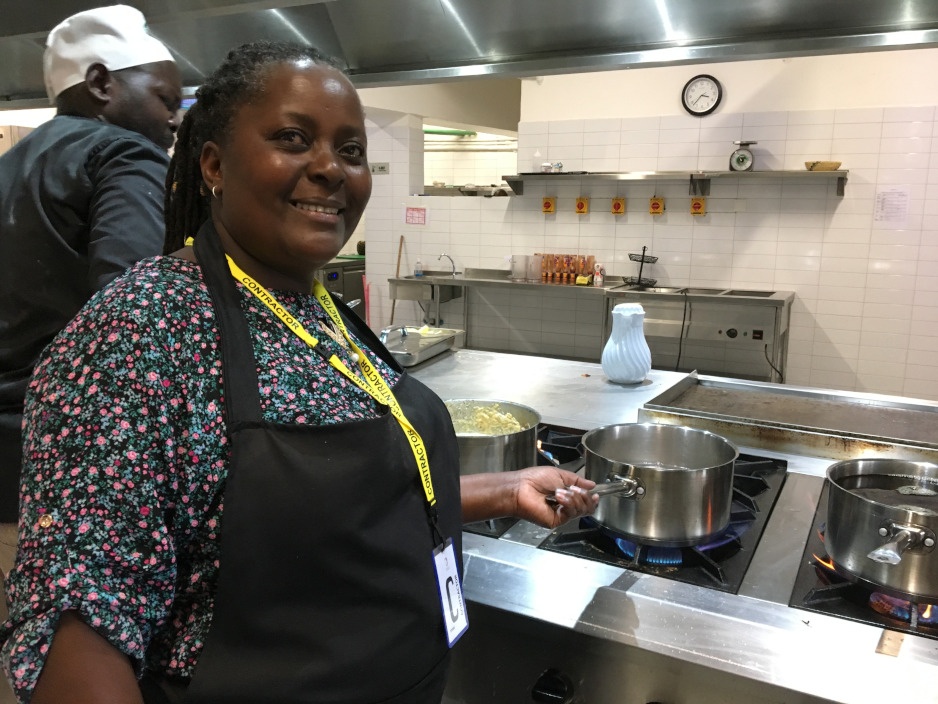 Mike Lawrence/PIH
Bella Twizerimana has managed the University of Global Health Equity kitchen for more than a year and employs nearly 70 people on campus, bringing an ethic of local foods and supporting sustainable agriculture in the northern Rwanda community of Butaro.

Three hours from Kigali, atop a remote hill hugging the Ugandan border, a small kitchen is having a big impact on agriculture and sustainability in the surrounding community.

The kitchen is a campus hub at the University of Global Health Equity (UGHE), a Partners In Health initiative in northern Rwanda and home to nearly 200 students and faculty. Step inside on any day of the week and find a hive of hairnets, chefs’ hats, and culinary activity. There could be pastry chefs icing an enormous birthday cake, multiple vats of sweet-smelling sauces bubbling on stoves, and the hum of several industrial-size ovens counting down to lunch hour.

At the heart of the activity is Bella Twizerimana, UGHE’s kitchen manager—and much more. Born in nearby Musanze, a northern region known for beautiful lakes and its proximity to Volcanoes National Park, Bella is a former teacher and bank manager who now is a leader in the regional hospitality industry.

She’s been leading UGHE’s kitchen for more than a year, and employs nearly 70 people on campus.

Most of those people are from local areas, and all of them—sous chefs, food preppers, caterers, and kitchen cleaners—have been personally trained by Bella. That training starts outside of the kitchen walls, with a focus on growing local fruits and vegetables and rearing livestock for sustainable meat options.

The kitchen’s mission goes hand in hand with that of both PIH and UGHE: to ensure that everyone, everywhere, has a healthy and productive life. Food, after all, is vital to good health.

“The things you eat are what you become,” Bella says. “The customer first eats with his eyes, and then thinks about the taste, and then health. You must mix all of them.”

Mixing it up is what Bella does best. Her kitchen is a swirling, bustling part of UGHE’s plans for expansion, and a key player in UGHE’s mission to support its neighbors in the surrounding communities of Butaro.

On a recent day in February, experts in both fields—medicine and hospitality—were stationed at Bella’s stoves and cutting boards.

Visiting UGHE was acclaimed chef Jody Adams, owner of multiple Boston-based restaurants and a member of PIH’s Board of Trustees. She was on hand to explore the campus, meet the kitchen staff, and demonstrate some new dishes, using local ingredients. The meeting between Jody and Bella—two extraordinary female leaders—had been in the works for some time.

“One of my dreams for Bella was to have her meet Jody,” says Dr. Paul Farmer, another guest of honor that day.

For a few hours, under Bella’s watchful eye, Paul switches roles from PIH co-founder and chief strategist to UGHE sous chef, looking just the part with a rolling pin and chef’s hat for the day’s kitchen demo.

“I wanted Jody to meet our network of chefs here and Bella was part of that. Her staff are fantastic. The people who serve meals, who clean up—there is something special about this kitchen,” Paul says.

“I’d been told about the kitchen and Bella’s food,” she says. “I was prepped to have high expectations, and they were met. The ingredients here in Rwanda are amazing.”

In addition to lunch service, Bella and Jody prepare fresh gnocchi and spanakopita—a flaky Greek pie, filled with spinach—for a taste-testing later in the day, kneading locally grown, cooked potatoes into a thick dough with eggs, flour, and salt. They select and slice generous handfuls of dodo, a basil-like plant that grows in the surrounding fields of Burera District.

For all of the food that comes out of her kitchen, Bella prioritizes locally sourced ingredients, including meats, eggs, cream, honey, fresh fruit, and vegetables. This, she explains, supports the income of local farmers, encourages the diversification of crops grown in the area, and, subsequently, boosts the nutritional value of what people eat on campus and in the community.

Explaining that philosophy, Bella moves her hand in a circle on the table.

“Our kitchen works in a cycle—from farmers to food to farmers,” she says. “Whereas some restaurants use supermarkets, we have a big community garden, and it is UGHE’s role to support what it offers.”

When ingredients can’t be locally sourced, Bella looks further afield—but only as a short-term solution. Channeling efforts back into the community, Bella has been identifying “food gaps,” and how to address them with the simplest, age-old solution: seeds.

“We want to help farmers grow the vegetables we need,” Bella explains. “The variety is not enough. We have already bought many seeds, and are preparing to plant them locally in collaboration with local farmers.”

The local growing efforts will run on a house-to-house basis, as Bella and her team meet with local families to match the right seeds with the right land, develop knowledge about their growth, and support the diversification of crops in the area.

For Jody, seeing this passion firsthand was striking.

“Being around Bella and getting to know her philosophy for food, her commitment to local ingredients and community education—it was so impressive,” Jody says. “It got me excited about planning my next trip back.”

Jody said she also was struck by a feeling of solidarity—women helping women in the culinary world.

“We have always had to fight and advocate for ourselves and other women. I don’t know if that will ever end,” she says. “Women will always have to do more and they need to support each other. Entering Bella’s kitchen was a wonderful experience—to see firsthand the people who she mentors through the process of cooking. I felt very comfortable there. We didn’t speak the same language, but we spoke the same language of food."