WHO to Send 1 Million Cholera Vaccines to Haiti 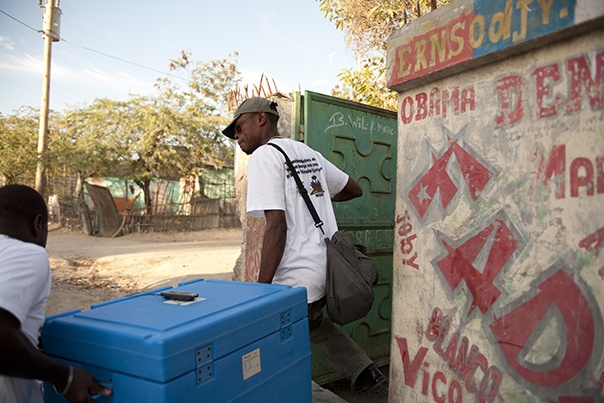 Photo by Jon Lascher / Partners In Health
PIH staff carry a case containing the cholera vaccine Sanchol in the Artibonite region of Haiti in April 2012.

The World Health Organization announced Tuesday that it will send 1 million doses of cholera vaccine to Haiti, where hundreds of cases of the deadly diarrheal disease have been reported after Hurricane Matthew tore through the country one week ago.

Partners In Health applauds the news for a simple reason.

The WHO will coordinate the use of vaccines with Haiti’s Ministry of Public Health and Population, which leads the cholera response in Haiti, Ivers says. Any decision on the final destination of the vaccines will greatly depend on need and the logistical capacity to distribute them.

Zanmi Lasante, as PIH is known in Haiti, has seen firsthand the power of cholera vaccination. In 2012, staff conducted a successful vaccination campaign that reached 45,417 Haitians in the regions of Grand Saline and Bocozel. Nearly 90 percent of patients received the recommended two dosages.

The campaign dramatically reduced the risk of cholera for those who got the vaccine, and likely for those who didn’t. As Ivers explains, cholera vaccines have an effect called “herd protection.” The more people who are vaccinated, the less cholera circulates—meaning even those who didn’t receive the vaccine have less risk of getting the disease.

Hundreds of cholera cases have already been reported just one week after the hurricane in the hardest-hit South, including Jérémie, Port Salut, and Les Cayes. Flood waters have mixed with sewage contaminated with cholera bacteria. Because fewer than half of Haitians have access to clean water, they draw from these sources and suffer the consequences. The infectious disease causes vomiting and diarrhea, and patients can die within 24 hours if the illness is left untreated.

PIH staff are now organizing mobile teams to help support partners in the South, including at the hospital in Les Cayes.

Cholera was introduced to Haiti in 2010. Shortly after the devastating January earthquake, the United Nations flew in a group of peacekeepers from Nepal, whose capital had recently suffered an outbreak of the disease, and set them up in a camp with poor plumbing. Contaminated sewage leaked into a tributary of the longest river in the country, the 200-mile Artibonite, which is a water source for countless Haitians. A cholera epidemic was born. In the six years since, nearly 10,000 Haitians have died and 800,000 have been sickened by the disease.