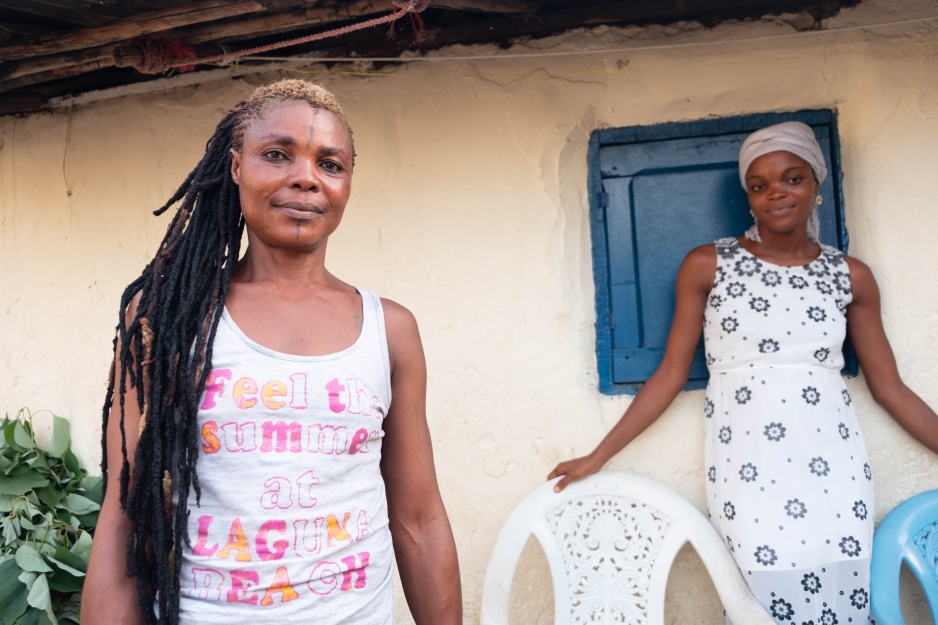 Photos by Emma Minor / Partners In Health
Mariama Kamara (left), stands with her daughter, Hawa, outside their home in eastern Sierra Leone, a region particularly hard hit during the Ebola epidemic.

Mariama Kamara felt suddenly unwell upon coming home to her daughter and grandson one evening in August 2016. After walking the familiar dusty road home from the diamond mine where the 43-year-old worked in Sierra Leone’s Kono District, she sat down in the kitchen with a worsening headache and nausea. The terrifying realization came to her as she listened to her family’s playful evening chatter—her symptoms pointed to Ebola.

Sitting slumped at the kitchen table, Kamara questioned how her daughter and adopted grandchild, Hawa and Ibrihim Kamara, would cope if she wasn’t there for them, and wondered about the treatment they would likely receive when neighbors heard they were an “Ebola family.” It occurred to her that many other mothers, like her, must have faced similar turmoil before being taken away by ambulances, as was increasingly the case in her village. In a flash of panic, she considered taking her family with her to the hospital, reasoning that perhaps they would be safer by her side rather than left to face these hardships alone.

In the fall of 2014, Partners In Health was invited by the Sierra Leonean government to help respond to the Ebola epidemic, including the provision of care in Kono District. Over that time, around 800 people from the district were placed under isolation, many of whom were parents or caregivers of young children, according to PIH records. More than half of them, or 454 people, were identified as Ebola-positive. And a large number counted among the staggering 3,955 deaths across Sierra Leone, during what would amount to the world’s largest epidemic of its kind.

When mothers and fathers were taken away, their infants relied on the care of generous neighbors and extended family. If that wasn’t an option, they were taken to the Observational Interim Care Center, a UNICEF-funded service that provided food and support to children of Ebola patients. By the end of the epidemic, 5,666 children across the country had lost a parent as a result of Ebola.

But Kamara didn’t want to think about this that night, while she sat hunched in her chair. Still, her conviction in her family’s resilience grew as the hours passed. She was a keen boxer, regularly participating in local female boxing competitions, and had taught Hawa how to box from an early age. Her favorite motto, “Train hard, fight easy,” was one she had instilled in her daughter. And this fighting spirit, she felt certain, would translate into the strength Hawa needed to guide Ibrihim through life, whether she returned to them or not.

During the peak of the Ebola epidemic in Sierra Leone, communities were instructed to call an emergency line if they or others suspected Ebola’s tell-tale symptoms. Many patients, like Kamara, were taken into immediate isolation for 21-days. So after being rushed to PIH-supported Koidu Government Hospital, where she received an injection to stem the spread of the infection, she was taken by ambulance to an Ebola treatment center more than 70 miles away.

“There were six of us packed in. One man died on the way with blood and sickness coming out of him everywhere,” Kamara remembered. “I didn’t have a chance to say goodbye to my children, but my resilience was strong and I believed I would be back with them soon.”

Kamara was at the Ebola treatment center for almost five weeks, without any form of communication with her family.

“I cried for the whole month she was gone,” said Hawa, who was 24 at the time. “When people went there, they rarely came back.”

Hawa found out that her mother’s test result had come back Ebola-positive when a group of people working for the district health medical team came to her home and removed all of their belongings to be taken away and burned—a typical practice at the time, which left survivors completely destitute. Fortunately, she had already found a new home for her and Ibrihim, who was 4 at the time.

After weeks of worry, Kamara was one of the few to fight the terrifying odds and survive Ebola, returning home to her family in October 2016.

“When she came back it was night and she was sad,” Hawa remembered. “She didn’t want me to touch her, because she was worried about infection. But I wanted to hug her so badly.”

Upon her return, Kamara decided to support the children of those parents less fortunate than her. After being told she was no longer welcome at the local mine, due to unfounded suspicions that she was still infectious, she applied to become a caregiver at the center that supported children of Ebola patients. She worked there for more than a year cooking, cleaning, and “taking care of people’s children when they couldn’t.” All but one of the 30 children under her watchful care survived the epidemic.

Kamara also felt drawn to other survivors. She became part of a tight-knit group of friends who supported one another through regular bouts of illness—common during post-Ebola recovery—and intense societal stigma, which they experienced from community members on a daily basis. She had to carry her treatment center certificate wherever she went in case someone confronted her.

Cognizant of societal stigma in the epidemic’s aftermath, PIH leadership vowed to employ Ebola survivors and their children whenever possible. Today, 28 Ebola survivors work for PIH in Sierra Leone, in a range of different roles. Kamara is a member of the launderette team at Koidu Government Hospital. And not far away, Hawa works with the social protection team, providing financial support to Kono’s most vulnerable patients.

“When I see patients, it reminds me of my past,” Hawa said. “My mum was in a lot of pain when she had Ebola.”

True to her promise of supporting those left vulnerable by Ebola, Kamara adopted three children in the wake of the epidemic: Alusine and Alusane, now 16-year-old twin brothers, and Sara, now 13.

“It wasn’t a difficult choice for me,” Kamara said, having noticed how the three children struggled to receive the care they needed in their community. “My house is full of love.”

Not to mention, quite busy. Kamara maintains a strict routine to keep her family in check. “I get up at 4 a.m. to do domestic work, go to work, and then I’m home by 4 p.m. to spend time with them,” she said.

Kamara stresses the importance of education, believing the surest way to motivate her children to work hard is through her own attendance of PIH’s literacy classes, which take place five days a week and have welcomed more than 80 students in Kono to date. “If I’d had this training before in my life, I think I would have found times a lot easier,” she said. “When I started, I couldn’t hold a pencil properly. But now I can write my name.”

Although not as strong physically as she once was at the peak of her boxing game, Kamara has gained mental perseverance through her recent trials. Hawa said her mother became noticeably “louder” following her illness, and that after hearing about PIH’s classes, nothing could stop her from signing up to receive the education she never had growing up.

Kamara’s family is about to get even larger as Hawa looks forward to the birth of her first child with Komba James Tongu, her husband and PIH's motorbike coordinator in Kono, at the end of the summer. Kamara surely takes this addition as a blessing and is prepared for the new adventure.

“My mum did whatever it takes and took on any responsibility for me,” she said, “just like I do for my children now.”