How One Prenatal Checkup Saved Two Lives in Mexico 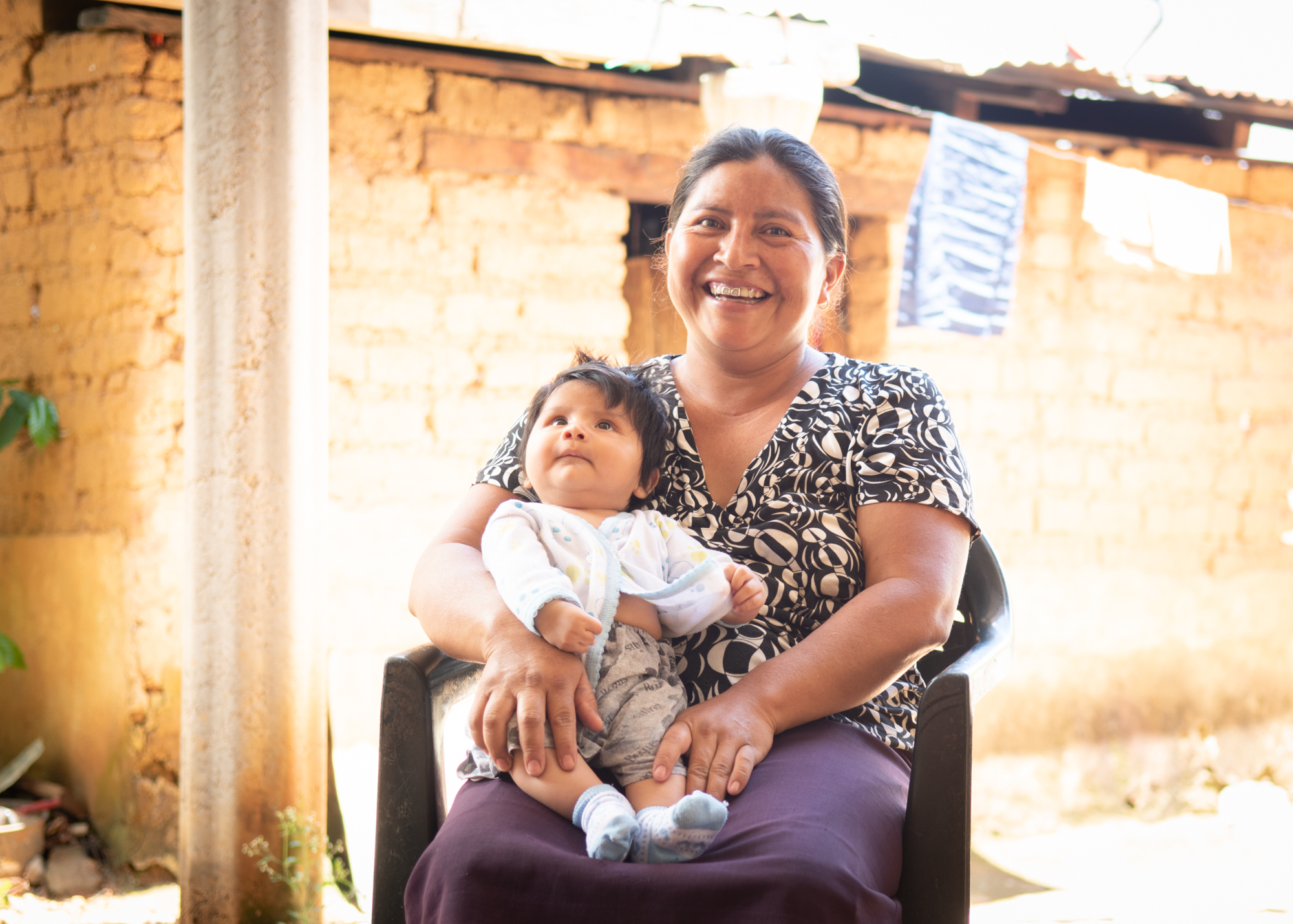 Olga Veronica Roblero holds her three-month-old son, Omar, outside their home in Salvador Urbina, one of 10 communities supported by PIH in Chiapas, Mexico.
Photo by Mary Schaad / Partners In Health

Three-month-old Omar slept peacefully in a hammock in the shade while his mother, Olga Veronica Roblero, laid out beans to dry in the sun nearby. They were at the family’s home in the rural Sierra Madre region of Chiapas, Mexico, where Roblero and her husband make a subsistence living growing corn, beans, and coffee. Most families in the region do the same, farming in the mountains of Mexico’s southern end, near the border with Guatemala. Chiapas is known for its coffee, but it’s also—and long has been—a highly marginalized region, where families face enormous challenges in accessing health care.

The single dirt road near their home mostly bears foot traffic, from people going to and from the small community of Salvador Urbina, about a 20-minute walk south. There, and in nine other remote communities in the region, Partners In Health—known locally as Compañeros En Salud—is collaborating with Mexico’s Ministry of Health on an innovative partnership to ensure meaningful access to quality medical care for families like the Robleros.

Baby Omar is Roblero’s fourth child. She gave birth to all three of her older children at home, with a traditional midwife, but Omar was born in the regional hospital at Villaflores. How that came to be, and how Roblero was able to have a healthy childbirth, is a story about the vital importance of community-based primary care, an increased emphasis on maternal health, and how PIH is working to change the model of care–both the experience and the perception—for mothers in Chiapas.

Roblero intimately understands the challenges of accessing maternal care. Years earlier, when Omar’s siblings were born, there were no doctors in the area, only a part-time government health worker in the community’s small public health outpost. There also was no public transportation to travel for care. The next nearest health facility is a community hospital in Jaltenango de la Paz, nearly two hours away by car—a luxury most people didn’t have, and still don’t.

Those conditions meant giving birth at home was not just the norm, but often the only option, for women in Salvador Urbina and other rural communities in Chiapas.

“I didn’t know what it was like to have a baby in a hospital, until (Omar),” Roblero said.

She’s far from alone. More than one third of births in Chiapas took place at home in 2016, according to national data. The region had Mexico’s highest maternal mortality rate that year, and a quarter of the women who died had not had any prenatal care.

PIH is working to stop those deaths, and fill the gap in maternal care, by supporting services at 10 clinics in remote areas, serving more than 140 communities. Primary care often is provided by first-year physicians, known as pasantes, whom PIH recruits by partnering with medical schools in Mexico.

PIH’s support of the public health clinic in Salvador Urbina has meant that, since 2014, the community has had regular access to care by full-time physicians. That enabled Roblero to receive monthly prenatal care with Dr. Adolfo Cavazos, a pasante carrying out his government-required social service year by living and working in the community.

“I wasn’t having any problems at all,” she said. “All the appointments I had, I went to them. They would tell me the date. They checked everything for me; blood pressure, everything, came out normal.”

That changed at a regular checkup a few weeks before her due date.

After welcoming Roblero to the clinic, Cavazos began his routine exam and soon became concerned. He consulted with Dr. Marwa Saleh, a family medicine physician working with him in Salvador Urbina that week through a global health fellowship with the U.S.-based HEAL Initiative. Both doctors noticed Roblero’s feet were swollen and checked her blood pressure. They also tested her urine and found high protein levels.

Those symptoms made the doctors concerned about preeclampsia, a pregnancy-related condition involving high blood pressure that can result in seizures, hemorrhage, or organ damage in the mother, placing her life and the fetus at serious risk. Symptoms of preeclampsia aren’t always apparent, and so it was fortunate that Roblero was coming regularly for her care.

“There are women who don’t have symptoms, and that’s why it’s so important that they go each month, or month and a half, for prenatal visits, which includes having their blood pressure checked,” said Dr. Jimena Maza, director of primary care for PIH in Mexico.

The physicians explained to Roblero that she needed to be evaluated in a hospital. That’s no simple referral for patients in these communities. Public transportation from Salvador Urbina, for example, is available only twice per day–at dawn and around noon–and often means riding in the bed of a pickup that, sometimes, offers a tarp for cover from the sun or rain. A ruta, as it’s called, often is standing-room-only for the two-hour trip to Jaltenango.

PIH helps address those needs by giving patients vouchers for transportation and food, and providing lodging near the hospital when needed. In Roblero’s case, the team arranged for her to travel to Jaltenango with Maza. She packed an overnight bag and was joined by her mother-in-law and husband.

The trip meant that, for the first time in her life, Roblero would set foot in a hospital.

A new kind of maternal care

Roblero long had wondered what hospital treatment would be like. Her understandable concerns were based on long histories of medical mistreatment not only in Chiapas, but in communities with oversaturated hospitals across Mexico and—for that matter—around the world. Dehumanizing treatment, overuse of medical interventions, and other violations of patients’ rights have characterized cases of obstetric violence against patients, who may fear speaking up for themselves at the risk of not receiving care.

This resulting fear of facility-based childbirth is one more obstacle to care that PIH is actively working to address, in Chiapas and within other marginalized regions around the world.

At the community hospital in Jaltenango, Fabiola Ortiz, a nurse and perinatal specialist, met Roblero when she arrived. Ortiz is a clinical supervisor for PIH’s team of obstetrics nursing pasantes who work in the hospital and its neighboring Casa Materna, a new birth center that is part of the collaboration between PIH and Mexico’s Ministry of Health.

Dr. Mariana Montaño, maternal health program coordinator for PIH in Mexico, said care at the Jaltenango hospital has an intercultural approach and focuses on the needs of women, who are empowered to make decisions about their care.

“Women have the right to choose the position of childbirth and a companion to accompany them, and are allowed to move freely or change positions,” Montaño said. “They also receive support with non-pharmacological measures for alleviating pain, and have immediate skin-to-skin contact with their baby after delivery.”

Roblero said the care she received at Jaltenango immediately eased her concerns about hospitals.

“It was there that I saw that, yes, they take good care of you,” she said. “The doctors and nurses who are there, they were really attentive.”

The hospital team evaluated Roblero and ordered labs while they began to administer magnesium sulfate as a measure to prevent eclampsia. They talked to her about what they were observing, and explained the increasing likelihood that she would need a cesarean section. As a community hospital, the Jaltenango facility was not equipped for some complicated procedures, including C-sections, meaning Roblero again would need a transfer to a properly equipped facility.

After she was stabilized and travel arrangements were made, Roblero was transferred to a hospital in Villaflores, even further north from her home in Salvador Urbina. There, by way of a successful C-section, healthy baby Omar was born.

"Here we are, thanks to all of you"

This smooth flow of activities—the diagnosis of Roblero’s preeclampsia and need for a C-section, her successful transfer from her local clinic to a community hospital, and finally the identification of successful transfer to a regional hospital to perform her surgery--demonstrate the positive impact of PIH’s work to strengthen the public health care system. It’s a reality that couldn’t have been taken for granted in years past.

Roblero’s care continued after Omar was born. After she returned to Salvador Urbina, Cavazos and Cecilia Gálvez Roblero, who serves the clinic as a clinician’s assistant, checked in with Roblero regularly, visiting her at home for blood pressure checks to monitor for postpartum preeclampsia.

Dr. Jessica Standish, another visiting family medicine specialist, accompanied Cavazos to Roblero’s home a week after Omar’s birth to remove her C-section stitches. They gathered in a dark bedroom, which was being rebuilt after suffering damage in an 8.1-magnitude earthquake that struck just off the coast of Chiapas a year earlier. The family was still without electricity, so the doctors had brought along a headlamp.

Before PIH began supporting the clinic in Salvador Urbina, Roblero would have had to travel for several hours during the rainy season and possibly stay overnight, with week-old Omar in tow, to have her stitches removed at the nearest hospital. But with Cavazos and Standish providing care at Roblero’s home, removing her stitches and re-bandaging the wound took less than 30 minutes.

Home visits are also conducted by PIH community health workers, or acompañantes, who visit women during and after pregnancy to provide information, resources, care, and support. Acompañantes work in the communities where they live, meaning neighbors are helping neighbors and directly understand local needs and conditions.

“Quality maternal care begins in the community, with first-level care clinics providing good prenatal care, and with the identification of risk factors and timely referral to specialized care if necessary,” Montaño said. “Ensuring that patients have meaningful access to comprehensive care requires effective coordination and communication between first, second, and third levels of care. But it also requires that we address all the barriers to care at each level, whether they’re logistical, economic, or involve regaining confidence in the health system.”

PIH’s work in Chiapas is helping to change women’s experience and their perceptions of maternal care. Most importantly, though, it is changing lives—and saving them.

“If that day hadn’t happened that way, I don’t know. I think I might not have been able, or may not be here. I don’t know if I or my child…” Roblero said, not daring to voice her fears about what would have happened had PIH not been there to help.