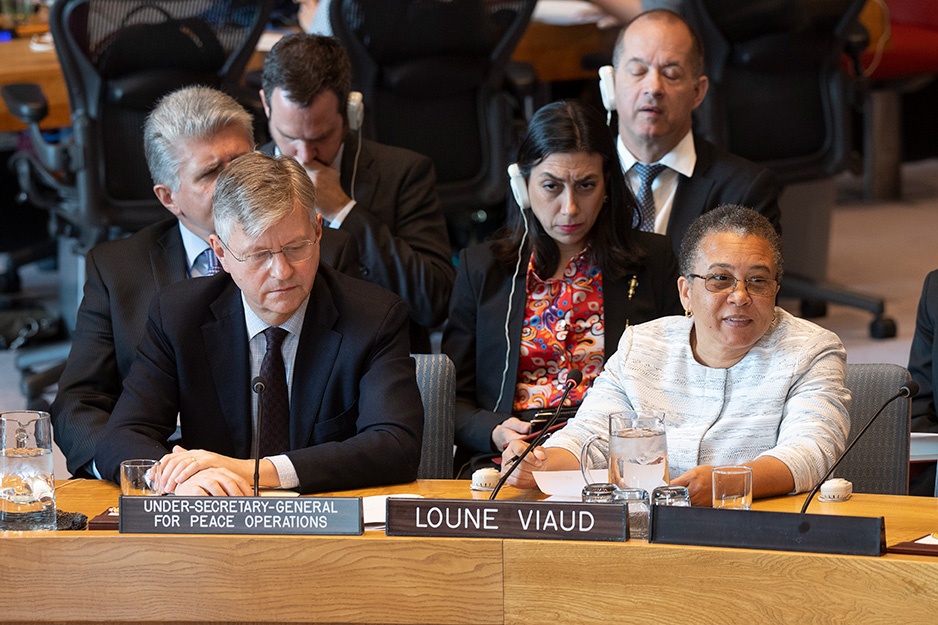 Photo courtesy of the United Nations
Loune Viaud (right), executive director of Zanmi Lasante, as Partners In Health is know in Haiti, addresses Security Council members on the status of women and girls in Haiti at UN headquarters in New York City on Wednesday, April 3. Jean-Pierre Lacroix (left), UN's Under-Secretary-General for Peace Operations, was among the day's panelists.

Loune Viaud, executive director of Zanmi Lasante, as Partners In Health is known in Haiti, urged members of the UN Security Council to support more equitable health care options for women and girls in Haiti, to help end sexual and gender-based violence, and to ensure increased participation of women in the political and public sector.

Viaud addressed the Security Council at the UN headquarters in New York City on Wednesday, April 3. She is the first Haitian woman representing civil society to brief the council and presented alongside Michelle Bachelet, the UN High Commissioner for Human Rights, and Jean-Pierre Lacroix, UN Under-Secretary-General for Peace Operations. Much of the day's discussion revolved around the UN's peacekeeping mission in Haiti and plans to remove troops this October.

Below, read excerpts from Viaud’s speech and watch a video with her full comments.

“Over the last 30 years, Haiti has been through significant challenges, including the devastating 2010 earthquake and cholera outbreak from which we continue to recover. We have also seen a number of positive changes in my country: Roads exist where they never had before, access to health services increased, and we are seeing better partnerships between local organizations and their foreign counterparts on health and education.

Yet, much more remains to be completed. The UN promised to right Haiti’s wrongs in 2014, four years after the cholera outbreak began and we hold you to this promise.”

“Today, women in Haiti face barriers to achieving basic access to services, education and healthcare. For example, Haiti has one of the highest maternal mortality rates in the world: 359 women die for every 100,000 live births in Haiti.

Watching a woman die because she reached us too late; seeing families devastated after losing a mother, a wife, or a daughter in childbirth are images one cannot forget. They haunt me, and they should haunt all of us. Childbirth should not be a death sentence in Haiti.

Cancer is another issue that primarily affects women in Haiti – 75 percent of our patients are women. In partnership with the Haitian Ministry of Health, Zanmi Lasante has provided free cancer care to patients across the country for almost 20 years. Today, I am friends with Roselene Jean, our first cancer patient. Without the care we provided, she would no longer be with us.

Mr. President, members of the Security Council, no woman should die in Haiti because of lack of access to obstetric care or cancer.

Lack of access to women’s health care poses one of the greatest challenges to development in Haiti. Reinforcing the relationship between sustainable development and peace and security should therefore be central to the way the Council addresses the situation in Haiti and is fundamental to placing my country on the path to peace and stability.”

On sexual and gender-based violence:

“The difficult work to end sexual- and gender-based violence in Haiti remains a silent fight. It is a topic no one wants to discuss, yet it can change a young woman’s life forever. Over 40 percent of all sexual assault victims in Haiti are under the age of 25, with many that we serve below the age of 15. I speak on behalf of all survivors of sexual and gender-based violence, when I say to you, Impunity for violence against women and girls in Haiti must end.

We need not only a comprehensive law on gender-based violence, we must also educate Haitians to respect women and girls and shift the harmful social norms that cause the violence in the first place. The Security Council and the United Nations Mission for Justice Support in Haiti should work with the Haitian government to advance the adoption of the draft Penal Code, and ensure the definition of sexual assault under the code is based on consent. This would bring the Penal Code further in line with international legal standards and ensure access to justice for survivors.

As service providers, we know the critical importance of medical care for survivors; we also know that throughout the country, these services are insufficient. Survivors of gender-based violence need timely and comprehensive care to address the risks of sexually transmitted diseases, including HIV as well as unwanted pregnancies. This means psychosocial support, medical intervention, and fair and safe access to the justice system.”

“Haiti is a small country full of larger-than-life women. These women have helped their communities and families flourish despite the most dire and tragic of conditions. These communities and families sacrifice everything for their children’s education and survival. Yet, girls have limited role models or advocates in Haiti’s halls of power. For a better future for our mothers, sisters, cousins, and daughters, we must support women’s participation in public and political life at all levels, and advocate for better laws, affordable health care, education, and justice.”

Viaud wrapped up her comments with a series of requests to Security Council members, including in building the capacity of local organizations to ensure high-quality, gender-sensitive services for survivors of sexual- and gender-based violence; funding to address women and girls’ urgent humanitarian needs; creating greater legal protections for women and girls; and ensuring women’s participation in future parliamentary elections.