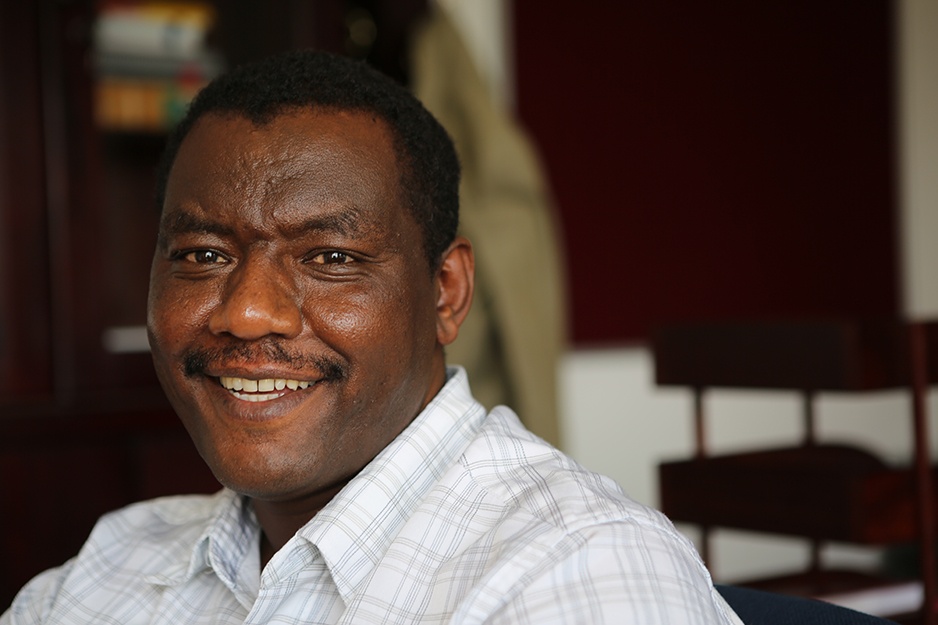 Dr. Abera Leta is executive director for Partners In Health in Lesotho, where a national health care reform is revamping how care is delivered and making incredible progress toward universal health coverage. The mountainous, landlocked country is surrounded by South Africa and has the world’s second-highest rates of HIV and TB, some of the world’s highest rates of maternal and infant mortality, and significant barriers to delivering health care in rugged, remote settings with limited resources.

The reform began in 2014 and is meeting those challenges head-on in four of Lesotho’s 10 districts. Broad upgrades to 72 health facilities; improved district management; and a strengthened network of 4,000 village health workers, who provide health screenings and resources door-to-door in their home communities, are just some of the strategies that are yielding stunning results.

PIH, known locally as Bo-mphato Litsebeletsong Tsa Bophelo, is supporting the reform as the primary technical advisor to Lesotho’s Ministry of Health. A comprehensive evaluation of the reform’s first four years was released in October and showed impressive impacts. For example, 1,300 more women completed at least four prenatal care visits in 2017, compared to before the reform; health center staff transferred 1,100 more women to hospitals during complicated childbirths; 1,700 more children were fully immunized; thousands more people per month were tested for HIV; health center staffing, supplies and structure were dramatically improved; and much more.

The reform’s successes are gaining international attention and positioning Lesotho as a global model for achieving universal health coverage in poor countries. Ahead of World UHC Day on Dec. 12, we caught up with Leta to talk about the reform’s progress, providing care in remote communities, and future goals as PIH prepares to help the government scale nationally, to all of Lesotho’s 10 districts.

How did the reform come to be? Can you give a quick overview of what led the government to take on such sweeping changes?

Partners In Health has operated in Lesotho since 2006. We began with the Rural Health Initiative, which supported HIV care in seven clinics in some of the country’s most isolated, mountainous areas. Before we arrived in those areas, care was provided through an outreach program with doctors who would visit sites by small plane or helicopter.

When we arrived, we began establishing programs that could provide comprehensive primary health care—including maternal and child health, TB screening, and more, in addition to HIV treatment—by engaging communities through the village health worker program.

We also worked to improve the availability of all the required supplies for primary health care, including essential drugs and human resources. We also expanded facility infrastructure, to make sure that we had enough space to provide care that met the burden of disease in our catchment areas.

We gradually were able to demonstrate good coverage in hard-to-reach areas, through the mountain clinics, where we are still operating.

When one of those clinics, Bobete, was visited by Lesotho’s prime minister, he was surprised and impressed by the scope and quality of services, and asked PIH to support the government by expanding our approach into other districts. That was how we began our involvement with the national health care reform.

Tell us about the scope of the reform now, and what strategies have created the success we’re seeing.

We’ve been supporting the reform over the last four years. It now encompasses 72 health facilities across four districts and reaches about 40 percent of Lesotho’s population, of about 2.2 million.

In each reform district, we created a model where we can link communities to health centers, and health centers to district hospitals. We also boosted the local capacity of each district management team so they can improve their governance and leadership, properly plan their needs for service delivery, supervise the quality of services, and train their staff.

At the community level, we recruited more than 4,000 village health workers, trained them, and paid them. We created a program whereby they will be supervised and coordinated, while also developing monitoring tools to track their work. We also expanded the capacities of health center staff by increasing training and supervision.

We ensured that health centers have enough supplies, in terms of essential drugs, and we established maternal waiting homes, where mothers can stay before delivery to avoid traveling during labor.

Women nearing childbirth stay at the waiting homes, and we provide their food. We recruited a PIH-funded cook for each waiting home. In addition, in health centers that have occasional power outages, we supplied disposable, sterilized delivery packs, so they can provide safe deliveries regardless of the power supply.

The other thing we created was a good referral system, contracting with local drivers to bring women to hospitals for complicated deliveries, because ambulances are not available everywhere. That gives health facilities confidence to admit mothers into maternal waiting homes. In case of complications, it is easy for them to refer women to the district hospital.

All of this has created big, remarkable improvements in capacities at the district level, and in clinical outcomes.

What have those improvements meant for patients and the use of health facilities?

More people are coming to outpatient departments for care. There is a huge improvement in women completing prenatal care, for example. There also is widespread availability of services that previously were not available. For example, only 2 percent of the 72 health centers could accommodate deliveries before the reform. Now, almost 100 percent of them are providing deliveries.

At the national level, Lesotho’s Ministry of Health has recognized this huge improvement, and the effective approach to implementing comprehensive primary health care to achieve universal health coverage. The ministry now is planning to expand the reform. They already have expanded some components, like the village health worker program, into the country’s remaining six districts, where resources allow.

But they need more resources to really scale up the whole package to the remaining districts.

You’ve spent much of the past year traveling to forums, events, and conferences to talk about the reform and raise interest. As you've made this international tour, what do you hear from people when you tell them about the transformation in Lesotho?

We’ve done a lot of presentations at local and international levels, especially since we’ve had data from the evaluation. In Lesotho, we presented to national stakeholders and government officials. They’ve been amazed with the results. And there is a huge commitment from the government to support the health reform, and also to join PIH to mobilize resources for scaling up the health reform nationally.

Internationally, PIH and the government jointly planned and gave a presentation in Astana, Kazakhstan, in October, at the WHO’s Global Conference on Primary Health Care. The event commemorated the 40th anniversary of the Declaration of Alma-Ata.

People were really excited to see this remarkable change through our approach and model of care.

We also presented in Washington, D.C., to our donors and several agencies. Everyone was very appreciative of what PIH is achieving in hard-to-reach, difficult areas, by creating a delivery strategy to achieve universal health coverage.

You mentioned hard-to-reach areas. For people who aren't familiar with Lesotho, what do you mean by that?

In Lesotho, the majority of people live in rural areas. But the rural areas are very difficult to access, because of the rugged terrain and mountains. People are very scattered and they live in the mountains. To reach facilities, there is no road access, so they have to walk for hours or ride horses.

That makes it really, really difficult. So we need to have a delivery strategy by which we can make lives easier in those areas. For example, the maternal waiting homes that enable pregnant women to come to health facilities earlier, like a week or days before their expected delivery, and stay in the maternal waiting home instead of having to travel while in labor or deliver at home, which is risky.

The reform is based on health system strategies that PIH has successfully employed in Haiti, Rwanda, and around the world. Why has it also been successful in Lesotho?

We have been doing direct service delivery in hard-to-reach areas, and providing quality services to people in the catchment areas of health facilities that we are supporting. But we also have developed strategies, such as providing technical assistance and logistic support, that enable the government to do the same things that PIH is doing. Through this approach, with a modest amount of funding, we are able to reach large numbers of people and many health facilities.

Where do you see the reform in five years?

I hope we will have the health reform scaled up across the country in all remaining districts, and that the results from these districts will be similar to the results we've already seen.