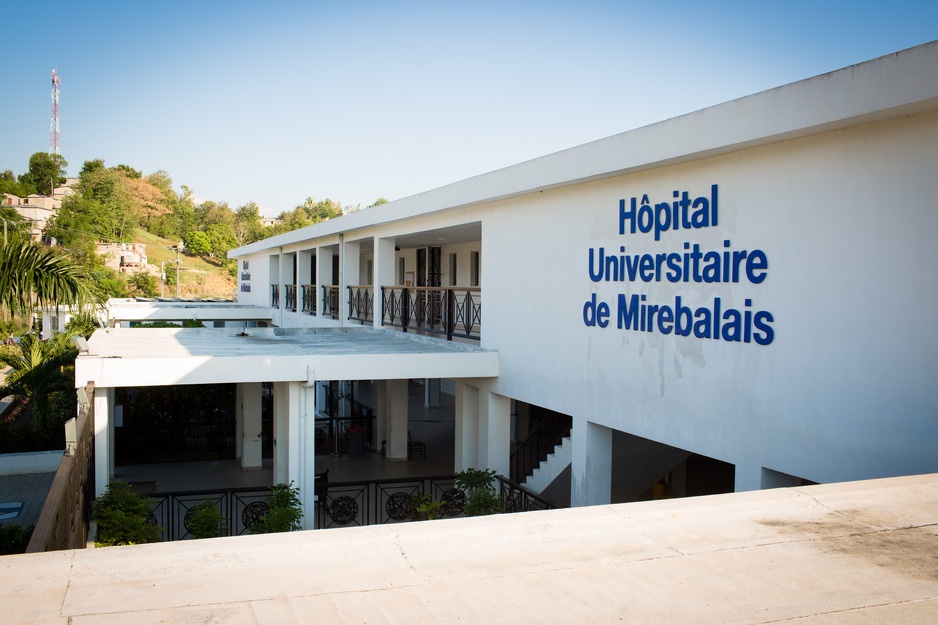 Photo by Cecille Joan Avila / Partners In Health
University Hospital in Mirebalais has remained open throughout the past six weeks of unrest in Haiti, and remains a beacon of hope for patients across the country.

Madeleine* and her husband, Stevenson, knew their family life was about to drastically change. They had seven children at home in Port-au-Prince, Haiti, and found out through an ultrasound that they were expecting triplets.

Like any woman in late pregnancy, Madeleine was feeling off balance, as her abdomen swelled and her center of balance shifted. On a Saturday in late September, the 33-year-old mother fell to the floor while trying to get into bed. Soon she began feeling pains and noticed fluid discharge, interpreting them as the signs of early labor. With growing concern, she called her physician, who informed her that no one was at the clinic to help. Demonstrations and barricades had blocked all traffic.

Madeleine was one among thousands of Haitians across the country caught in life-threatening situations, as Haiti continues to be mired in more than one month of protests that have resulted in some 200 people injured and 20 killed. Roadblocks and demonstrations have cut off transportation in and around the capital, as well as across the country, as inflation spikes and Haitians struggle to access gas, food, and clean water. Banks, schools, businesses, and many health care facilities have been closed for weeks.

They are doing whatever it takes to take care of patients."

Yet Zanmi Lasante, as Partners In Health is known locally, has kept open all its clinics and hospitals at 12 sites across the lower Artibonite and Central Plateau, including University Hospital in Mirebalais. Staff are working long hours, and scrambling to secure fuel for generators. Some have traveled hours by foot and motorcycle, dodging stones and tear gas, as they pass barricades to arrive for shifts. They are doing whatever it takes to take care of patients.

So when Madeleine and Stevenson, a 48 year-old shoe shiner, knew they needed to get to a hospital—and fast—a family member began asking around to see if University Hospital was still open. It was. The three hired a taxi the following day and sped toward Mirebalais, typically a 45-minute drive north of Port-au-Prince.

Not long into the trip, they hit their first roadblock. Their driver, a consummate negotiator, explained the couple’s situation to the demonstrators. A moment of fear gave way to relief. Not only did the demonstrators let them pass, they helped the car clear roadblocks and showed them the fastest back roads to the hospital. Two hours after leaving home, but much faster than they’d expected, they arrived at University Hospital.

Nursing staff swung into action. Madeleine was suffering from pre-eclampsia, they realized, and needed immediate attention. While they worked to get her blood pressure under control, they prepared her for labor so that, late Sunday evening, she safely delivered two babies before midnight. Two more babies followed in the wee hours of Monday morning.

And that’s when Madeline and Stevenson discovered they had quadruplets, not triplets.

Two girls arrived at 2.5 and 3.4 pounds, and two boys at 3.6 and 4 pounds. Because the newborns were underweight and had arrived more than two months early, they were placed in incubators to maintain their body temperature and receive constant monitoring in the NICU. While waiting to be transferred, Stevenson provided one of the babies kangaroo care, which allows infants skin-to-skin contact with their caregivers to help maintain body heat and stimulate feeding.

Meanwhile, Madeleine was in critical condition herself. She had lost a good amount of blood and required a transfusion. Hearing that the unrest had calmed, hospital leadership sent an ambulance to the Red Cross in Port-au-Prince that Tuesday to gather lifesaving units of O+ blood. The driver arrived back, safe and sound, and staff immediately provided the new mom with a transfusion.

The family remains in good hands at University Hospital, where they are cared for by a rotating crew of Haitian clinicians who arrive for shifts after overcoming their own obstacles each day. PIH staff form the backbone of a hospital that is trusted and always open, with lights on to receive more patients, like Madeleine and her family, every day.