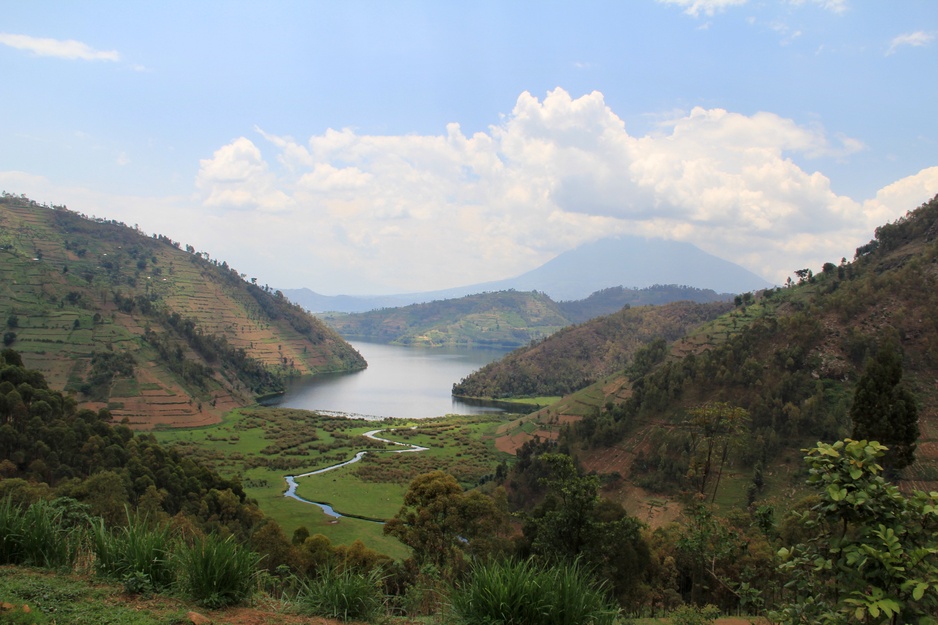 Alex Coutinho/PIH
Lake Burera in northern Rwanda. The country is marking 25 years this spring since the 1994 genocide against the Tutsi, with the annual period of remembrance and memorials known as kwibuka. The rebuilding of Rwanda's health system in recent years has created a foundation for national poverty reduction and economic development programs, lifting up residents with a focus on unity, reconciliation and empowerment.

Five years ago in The Lancet, Dr. Agnes Binagwaho, Dr. Paul Farmer, and more than 60 co-authors described how treatment for HIV in Rwanda became a catalyst, and foundation, for revitalizing the country’s health system in the aftermath of the devastating genocide against the Tutsis in 1994.

This spring, as Rwanda marks 25 years since the genocide with the country's annual period of remembrance and memorials, known as kwibuka, the health system itself has become a foundation for socioeconomic support and empowerment, and a vital piece of the country’s renewal.

Binagwaho is vice chancellor of the University of Global Health Equity, a growing, dynamic institution in rural northern Rwanda, so close to Volcanoes National Park that the extinct Mount Muhabura looms over campus. Farmer is co-founder and chief strategist of Partners In Health, which strengthens health systems in 10 countries around the world and began working in Rwanda in 2005. PIH is known locally as Inshuti Mu Buzima.

The 2014 Lancet study examined Rwanda’s health system at the 20-year mark and emphasized how Vision 2020, Rwanda’s national development plan launched in 2000, is inextricably intertwined with health care for all.

“The idea was to move from the disaster of the mid-1990s towards becoming a middle-income country by 2020. The plan invokes the principles of inclusive, people-centered development and social cohesion. Central to this vision was health equity,” their 2014 study states. “Prosperity would not be possible without substantial investments in public health and health-care delivery.”

The University of Global Health Equity, for example, is a PIH initiative that launched in 2015, inaugurated its Butaro campus in January, and is preparing to begin its new, six-and-a-half-year medical program this summer. With strong support from the national government, the university—which is creating local jobs in food services, security, campus support and more—is one embodiment of how Rwanda is working to lift up its citizens and improve livelihoods.

Other examples are a rice-farming program in the Rwinkwavu area of Eastern Province, for parents of children suffering malnutrition; a model village program that is building new, government-funded villages for impoverished communities across the country, including near the university; and an economic cooperative program that helps neighbors and co-workers pool their resources to create small businesses.

Binagwaho is a former Rwanda Minister of Health, and remains deeply connected with the government’s direction. She said that together, Rwanda’s national strategies for education, health, agriculture, and economic support have contributed to lifting more than 1.6 million Rwandans out of abject poverty over the past 25 years.

But she also noted that about 17 percent of Rwandans still remain there. A similar contrast can be found in life expectancy. While that statistic has increased from 33 years in 1990 to 68 years in 2018, Binagwaho said much work remains. Life expectancy globally was 72 years as of 2016, according to the World Health Organization.

“People still are not living to the full potential of humans,” Binagwaho said. “We have a lot of improvement to do.”

Rwanda’s next national census is in 2020, the same year targeted by the Vision 2020 development plan. That means a reckoning is around the corner. She added:  “We are waiting to see where the country stands now.”

Whatever the census reveals, the Lancet study five years ago and the continued work since then make clear that Rwanda already has come a long way since the national trauma that is now a quarter-century old.

Over 100 days in the spring of 1994, the genocide against the Tutsis led to the deaths of 1 million people—nearly 20 percent of the country’s population at the time—and displaced millions more.

“Whether survivor, perpetrator, or member of the diaspora, no Rwandan emerged unaffected,” Binagwaho and Farmer wrote in 2014.

The genocide reduced the country’s health system to rubble. The 2014 study describes the disaster starkly:

“Moreover, most health workers had either been killed or fled the country; many who remained had been complicit in the genocide, and trust in physicians and nurses was frayed,” the authors continued. “Destruction of health facilities and the collapse of supply chains for drugs and consumables handicapped the country for years. Capacity to respond to the new crisis of mental health trauma was as strapped as capacity to respond to the trauma usually attended by surgical teams: Rwanda boasted neither psychiatrists nor trauma surgeons.”

Gilbert Rwigema, chief operating officer for PIH in Rwanda, said in March that even before the genocide, health infrastructure in Rwanda was very limited. There was just one central hospital—in the capital, Kigali—where patients from around the country were referred if complications arose in their treatment.

“The few health facilities in 1994 were almost totally destroyed during the genocide, so the country had to rebuild,” Rwigema said. “Rwanda had to start almost from scratch.”

Now, he said, there are eight national referral and teaching hospitals around the country, four provincial hospitals, 36 district hospitals, and more than 400 health centers—with plans for an even more localized layer of care. Rwigema said there are plans for more than 2,000 health posts in Rwanda, which will provide access to services in even the most remote communities, served largely by community health workers.

As the 2014 study noted, though: “Major challenges to continued improvements in health care delivery in Rwanda remain, with significant implications for sustained economic development. Most notably, 44 to 47 percent of children were chronically malnourished in 2010.”

A national campaign begun in 2013 to reduce that percentage has given rise to agricultural incentive programs across the country. Similar programs are working to address non-communicable diseases, such as cancer, mental illness, injuries, and neonatal disorders, which together have accounted for more than half of Rwanda’s disease burden in recent years.

Rwigema has significant experience in Rwanda’s work to improve mental health care. He began working with PIH more than five years ago, as the program director for the northern Burera District. While there, he helped start the district’s mental health program, teaching families that mental health is a disease like any other and could be vastly helped with treatment.

“We fought that kind of stigma through campaigns, through education, through programs, also social support,” he said. “That work continues.”

The same could be said for many areas of Rwanda’s renewal, and for its people who will always be dealing with pain.

“The trauma of what happened 25 years ago will never heal completely—it is a trauma,” Binagwaho said. “People have been hurt in their heart, their bones. We still need accompaniment.”

PIH helps provide that accompaniment through economic and social assistance programs, which for the past four years have provided support in various forms to residents in Burera, Kayonza, and Kirehe districts. Thousands of families have benefited from economic development initiatives, new homes, and help with health insurance, education, and food security.

Binagwaho said sustained economic growth and empowerment, across all income levels, will be instrumental in helping the country and Rwandans move forward—a goal that PIH and the government share.

“At the 25th anniversary of the genocide, it’s good to recognize that the equity agenda that is a pillar of PIH is also a pillar of the strategy of the government of Rwanda since 1994,” she said. “It’s not PIH that brought it. It was already there.