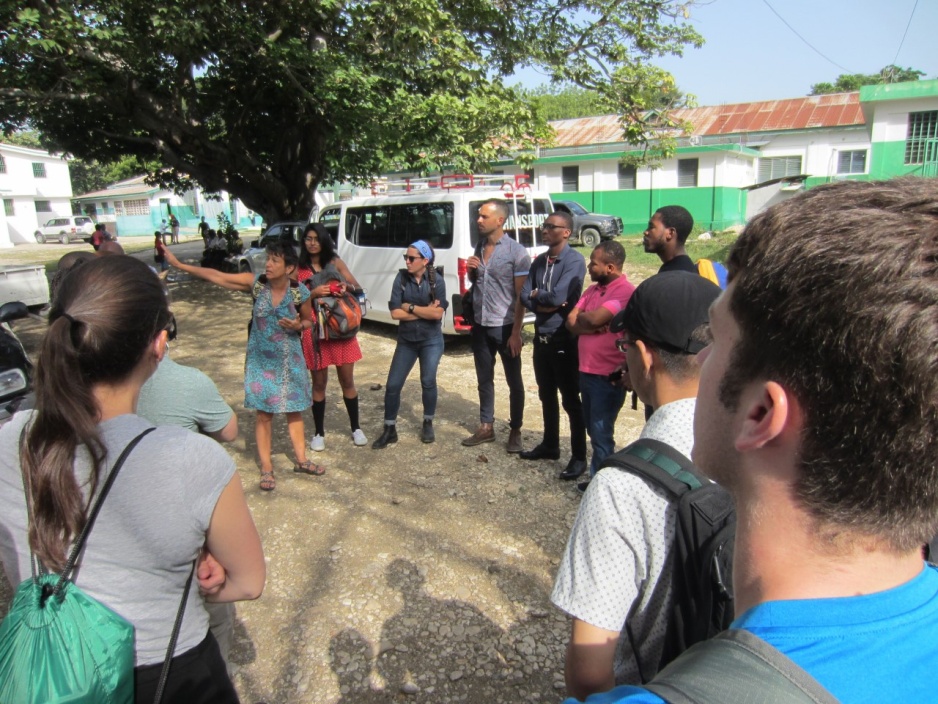 Photo courtesy of Gabriela Sarriera
Gabriela Sarriera, center in headband, stands with a group of residents and Haitian medical students during their week in Haiti, as part of an introduction to social medicine course.

Like many people, I first heard about Partners In Health when I was in college. I was a sophomore at the University of Vermont and a group of us had decided to attend the Unite for Sight Global Health and Innovation conference that’s hosted at Yale every spring. It’s the world’s largest global health conference that convenes professionals and students from more than 55 countries, and that year there happened to be a large number of speakers from PIH.

A year later, hard work coupled with serendipity led me to move to Rwanda. I was studying microbiology at the time with the long-term goal of attending medical school. Rwanda had achieved significant strides in the health sector despite the fact it is an impoverished country. Interested in understanding the global health field better, I reasoned it would be worthwhile to immerse myself there. With the support of UVM faculty, I took seven months to conduct research in Rwanda.

While there, I was working with Dr. Agnes Binagwaho, now vice chancellor of the University of Global Health Equity  and a senior lecturer on global health and social medicine at Harvard Medical School. I lived in the capital of Kigali at a staff house for Inshuti Mu Buzima, as PIH is known locally. The work I did with Dr. Binagwaho provided me a unique opportunity to better understand the Rwandan health system, and my housing provided me with insight into the non-profit realm. I learned that PIH wasn’t like other NGO’s; it didn’t seek to impose what it perceived Rwanda needed, and instead took the revolutionary approach of listening to the needs of the country first and then acting in accordance with those needs.

After returning to the United States and graduating, I took a job working for Dr. Joia Mukherjee, PIH’s chief medical officer. While I didn’t quite know what was next, I was certain that I wanted to work with PIH before embarking on my path through medical school. Joia was in the process of publishing her first book, An Introduction to Global Health Delivery: Practice, Equity, Human Rights, and I had the unique privilege of assisting at the 11th hour. It was while working with Joia that I was able to further understand how inequality contributed to poverty, racism, and health outcomes. I drew connections between what most impoverished countries faced, and the present condition in my home country of Puerto Rico.

As a native Puerto Rican, I was raised among stark dichotomies. Like many of the countries where PIH works, Puerto Rico has a history of colonization, exploitation, and imposition of neoliberalist principles. We have been another instrument in America’s toolbox for purposes of medical research, war weapons, cheap labor, tax havens, and the optimization of private markets. For further evidence of the systemic racism by the United States toward Puerto Rico, look no further than the U.S. response to Hurricane Maria in September 2017.

The U.S. response to the hurricane’s devastation of my home country infuriated me. PIH doesn’t work in Puerto Rico, yet my colleagues helped me acquire more than 150 pounds worth of essentials, including food, portable solar-powered lights, batteries, and monetary donations, and I flew down one week after the hurricane hit. Research for Joia’s book sparked my interest in getting further involved in domestic issues, and inspired a sense of urgency to contribute to advancing policies that directly affected Puerto Ricans and other marginalized communities.

That sentiment followed me into my current role as the manager of PIH’s grassroots strategy through the Engage program. PIH Engage is directly informed by the work the organization does in the field and uses that example to demonstrate that providing access to health for everyone is possible and should be our moral imperative. We target elected officials and their staff at all levels of government and show them what is possible when funds are allocated correctly. We also partner with other amazing organizations, such as Act Up, Health Gap, and Housing Works, to amplify their messages in support of health care as a human right. Our work also includes supporting domestic legislation that seeks to advance the universal health coverage movement.

I work with incredibly inspiring and dedicated volunteer community organizers, ranging from high school and college students to late-career professionals, who have a deep desire to improve the present condition for marginalized people. The PIH Engage network understands what happens when health care is unavailable, and they educate their communities, organize teams, generate resources, and advocate for policies that further the health for all movement.

While in college, I was always aware I wanted to do more. I fixated on understanding problems at their root. I was deeply aware of what happened when people in power were not held accountable. Against advice from most people in my life, I moved to Rwanda and then decided to take a couple of years off from formal schooling. The result has been an invaluable education and a deep knowledge that there is more than one way to achieve your goals.

I’ve come to realize that what matters most to me is using the privilege geography has afforded me to amplify the voices of those who were not lucky enough to be born within select parts of the world. I’ve come to understand that health care can be a tool for social change. We must dismantle existing structures used to perpetuate injustices and focus on achieving equity. My plan, and personal honor, is to be among the thousands of individuals around the world working toward  that dismantling so that, together, we can build a better, more just health care system for all.