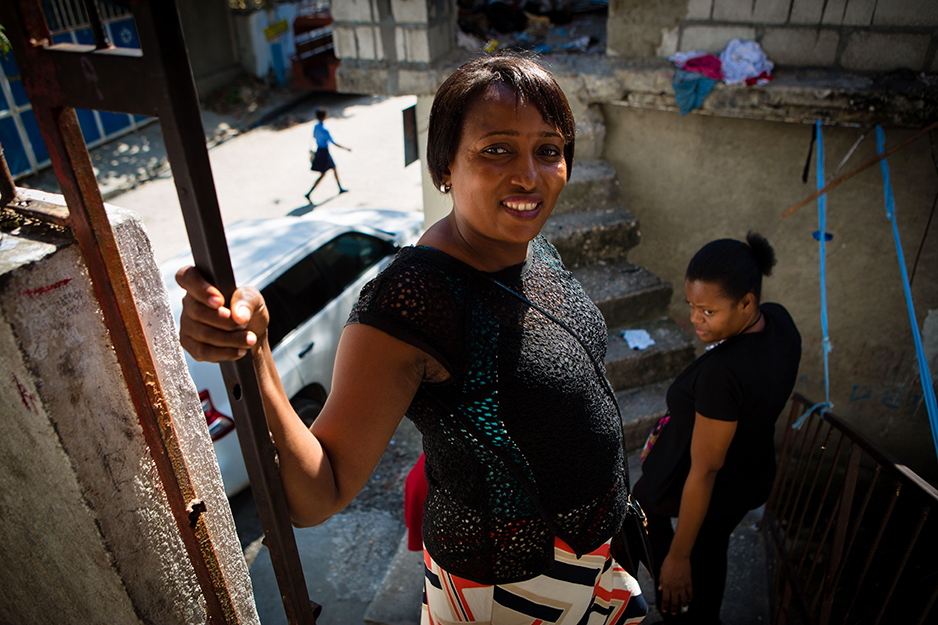 Marana Toussaint, 37, visited University Hospital near her home in Mirebalais, Haiti, after finding a small lump in her left breast. Oldine Deshommes (background), a PIH social worker, supported her throughout her care.
Photo by Cecille Joan Avila / Partners In Health

It all started with a pain in her left breast. She thought the tenderness was just another annoyance of that time of the month, a passing thing really. But then it didn’t go away. And if the discomfort were a symptom of her period, wouldn’t it have been in both breasts?

These thoughts lingered with Marana Toussaint, a sturdy 33-year-old mother of four with an optimist’s outlook on life, as she went about cooking, cleaning, and considering what to do. She spoke with her mother, who recommended she visit University Hospital, Partners In Health’s tertiary facility in their hometown of Mirebalais, Haiti.

On a Monday in January 2014, Toussaint arrived at the hospital for her first appointment with Dr. Ruth Damuse, the director of the oncology program. The composed, gentle-mannered doctor gave Toussaint a thorough exam and detected a small lump in her left breast. She recommended a biopsy, which a surgeon performed the following day, and sent the tissue sample to Boston for testing. Then came the hard part for Toussaint—waiting.

Six weeks later, Damuse received the results and had to break painful news to the young mother: Toussaint had breast cancer. The good news, at least in Damuse’s opinion, was that it was Stage 1 or 2. The doctor most often cared for patients who arrived with advanced cancer. Because Toussaint had detected the lump early, she had a solid chance at a cure.

Zanmi Lasante, as PIH is known locally, began providing cancer care under Damuse’s guidance in 2010 out of Hôpital Bon Sauveur in Cange. In 2013, Damuse and her staff transferred their services to University Hospital, where they have tended to new patients and treated a variety of cancers—from breast cancer and leukemia, to colon cancer and lymphoma.

Breast and cervical cancer diagnoses far outpace any others. More than 50 percent of cancer patients Damuse and her staff care for have been diagnosed with breast cancer.

Toussaint had heard of cancer before, but had never known anyone with it. In her mind, it was a death sentence. And for most people in Haiti, it is. University Hospital is the sole public facility that provides free, comprehensive cancer care. Two other hospitals in the capital of Port-au-Prince—one public, one private—offer oncology services, but cost and access to care remain out of reach for the vast majority of Haitians, who make less than $2 per day.

Damuse recommended that Toussaint undergo a mastectomy to remove the tumor and prevent the cancer’s spread, then take chemotherapy to kill any remaining cancer cells.

It was sobering news. Toussaint had breastfed each of her four children. The surgery would permanently alter her appearance. And she wondered if there was any truth to the Creole phrase, “Venn tete se venn kè.” Roughly translated, it means that veins in the breast directly connect to those in the heart, so a mastectomy would be a sure route to death.

Toussaint returned to her three-room home to consider her options and break the bad news to her husband. What she needed was comfort and support; what she got was rejection. He disapproved of the surgery and eventually left her and their four children. Not long afterwards, he’d moved in with another woman.

Suddenly a single mother with no income, Toussaint turned to her mother and sister for help. She decided to go ahead with the mastectomy and chemotherapy, and she and her children moved temporarily into her family home while she underwent surgery and treatment.

Every two weeks for eight months, Toussaint visited University Hospital and sat for hours in the oncology department, where Damuse and her attentive nursing staff hooked her up to a series of IVs. The chemotherapy left Toussaint wracked by nausea. She vomited and lost her appetite and all her hair—right down to her eyelashes and eyebrows. Many mornings, she suffered from debilitating cramps in her feet that would only release once she began gingerly walking around the house.

Toussaint’s cancer journey affected her children differently, but had the most impact on her oldest daughter, Thamar. Always a solid student, the 15-year-old started to do poorly in school. She hated seeing her mother’s scar, and Toussaint began to shield her chest around her children. The younger ones didn’t completely understand what was going on. Naively, they asked if the breast would grow back. She didn’t want to lie, so she told them that, no, it was not going to grow back.

In January 2015, Toussaint finished her last chemotherapy treatment and was placed on Tamoxifen, a drug that helps prevent the recurrence of her form of breast cancer. It was a major milestone that, unfortunately, she couldn’t celebrate for long.

For three months after finishing chemo, Toussaint didn’t get her period. She knew she wasn’t pregnant, and doubted she was already going through menopause. Again, she turned to Damuse for advice, who referred her to University Hospital’s OB/GYN department for a pelvic exam. The physician found pre-cancerous lesions on her cervix and informed Damuse.

By December, Toussaint was back in surgery to have a total hysterectomy—both her uterus and ovaries removed.

This January, Toussaint marked her third year as breast cancer free. She remains on Tamoxifen, which she picks up at a pharmacy in University Hospital. She will remain on hormone therapy for up to another three years. Whenever she does come, she tries to swing by the oncology ward. On a recent morning, she arrived with her jet-black hair in a neat bob. Her skin shone, her shoulders were set square and strong. She also wore a smile, because, as she said, she didn’t want her face to look blasé.

There is no doubt Toussaint is a survivor. Two cancer diagnoses in as many years and a partner’s betrayal would be earthshattering for many people. She weathered it all, she said, by searching for what made her happy—friendships among fellow cancer patients, reading, and watching television.

She also derived strength from her faith. Toussaint attends a Baptist church in Mirebalais, where she sings in the choir and has often talked to other parishioners about her cancer journey. Not long ago, a fellow choir member spoke to her about a lump she had found in her breast. At Toussaint’s advice, the woman visited University Hospital and learned she had breast cancer.

Toussaint watched as the woman followed a path similar to the one she had recently traveled. Surgery, chemotherapy, hair and weight loss. And then, thankfully, recovery. She shared this story as if it were a minor detail about her day—nothing special.

When told that she saved a life, Toussaint looked surprised, as if the thought had never occurred to her. She didn’t say a word, and just kept smiling.