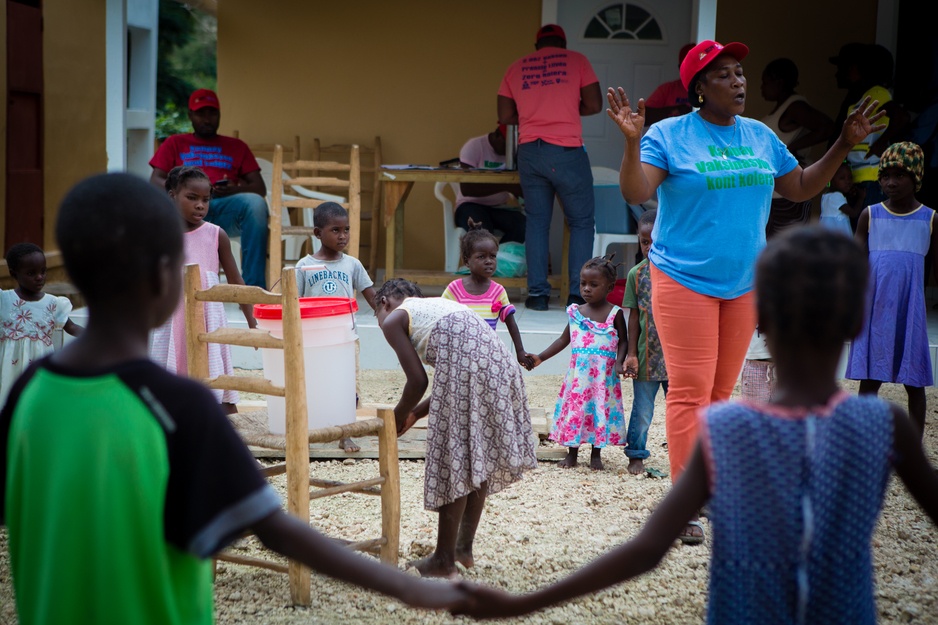 Cecille Joan Avila / PIH
Health agent Rose Marie Renati of Zanmi Lasante, as Partners In Health is known in Haiti, teaches children at an orphanage in Fond Michel how and why they should thoroughly wash their hands with soap and water. Her instruction came during a widespread cholera vaccination campaign in 2017. While not a single case of cholera has been confirmed in Haiti for a year, much work remains to improve access to clean water and sanitation facilities across the country.

The lack of clean water and sanitation in many of Haiti’s schools and communities makes one wonder if social justice in the nation is dead, and requires a shock back to life.

On the positive side, Haiti has fought back from one of modern time’s worst cholera epidemics. While more than 10,000 people died and nearly 1 million were infected in the decade following the devastating 2010 earthquake, not a single cholera case has been confirmed in Haiti since February 2019. This is an enormous victory.

However, does this mean that cholera—a waterborne disease—has been eradicated from Haiti? No. Does this mean Haiti no longer suffers from a lack of water and sanitation? Again, no.

Today, Haiti continues to fight for equality in water, sanitation and hygiene, known as WASH, in homes, health facilities, markets and schools. While thousands rushed to Haiti’s aid in the aftermath of the 2010 earthquake—and hundreds more made commitments to increase access to clean water and sanitation across the nation—most have now forgotten about Haiti’s needs.

Yet Haitians do not sit on their laurels and wait. I have seen firsthand the power of education in Haiti, and the thirst to achieve better education for the next generation of Haitian children.

Parents in Haiti go to every length possible to ensure their children receive an education. I have seen firsthand the beauty of a school day that begins before sunrise, when parents use irons heated over hot coals to press the uniforms of their daughters and sons. The meticulous process of combing and braiding hair with ribbons that match those uniforms, the folding over of stark white ankle socks to ensure they stay in place in perfectly polished shoes that will be muddied by days end.

But what happens to those children when they arrive at their school and need to relieve themselves? The majority of schools in rural areas of Haiti have neither toilets nor handwashing facilities. When facilities are available, they are in such disrepair that a child would prefer to defecate in an open field, to avoid the stench of years of shabby upkeep.

Where is the social justice for these children, and for families that are doing everything they can to ensure their future? Where is the social justice for the young girl who must end her education because she does not have a safe, hygienic space to care for herself during menstruation? By not safeguarding that all children have access to WASH in schools, the cycle of extreme poverty is perpetuated. Not only in Haiti, but also across the globe.

For many more children, not having access to WASH at home or school means diarrhea and other waterborne diseases keep them from attaining an education due to missed school days, which further increases the burden on families to reach out for health care that is often either unavailable or far too expensive to afford.

With a future generation of children who are not receiving an education, extreme poverty wins once again.

While many see extreme poverty as an insurmountable challenge the world over, access to clean water and sanitation can play a major role in ensuring children remain healthy enough to remain in school and lead productive lives, escaping the grip of extreme poverty.

Zanmi Lasante has been working in the field of water and sanitation since day one. Our earliest programs provided household toilets and improved water supplies for people with HIV and TB. Over the last 10 years, ZL has treated tens of thousands of people affected by cholera. Today, we have successfully brought sanitation facilities and clean water to dozens of schools and thousands of families in the Central Plateau, through the support of USAID and UNICEF.

The next generation of Haitians depends on continued advocacy and support. The stakes are clear:

When communities do not have access to safe water, children are most often the ones who are tasked with seeking out water, often many miles away from their homes. This can place them at greater risk of sexual violence, and of losing their chance at an education.

But when water and sanitation are available in communities and schools, children do not spend hours a day walking to water sources, and girls have a greater chance of remaining in school. When water and sanitation are available, boys and girls have equal access to an education, and a future outside of the vicious cycle of poverty.

Schools in Haiti, or anywhere in the world, should be our children’s second home. We must all work together to ensure that these spaces are environments where all children can be free of illness and free of worry when using water and bathrooms.

Today, when we drop off our children at school, let us all think of that young girl in rural Haiti who has begun to menstruate and, without clean facilities, is no longer able to go to school. Instead, she is charged with fetching water or other household tasks, and remains unable to read or write because her education has been halted. She is likely to be married much earlier in life than young girls in higher-income countries, and to continue living in extreme poverty.

I want us all to think of her today—and think of the power we all have, together, to change her life.

—Elizabeth Campa is senior health and policy officer and chief of staff for Executive Director Loune Viaud for Zanmi Lasante, as Partners In Health is known in Haiti. She has worked for the organization since 2013, and is a second-year graduate student at Harvard Medical School’s department of Global Health and Social Medicine.