"From Tonkolili to Tewksbury," as Dr. Joia Mukherjee said, community-based contact tracing has been a foundation of efforts against Ebola and COVID-19.

While home to some of the best hospitals and medical schools in the U.S., Massachusetts was one of the hardest-hit U.S. states early in the COVID-19 pandemic. In looking to stop the virus’ spread, state leaders turned to world experts—and found significant help from Sierra Leone.

Seeing how the West African nation and its Ebola response in 2014-16 are informing Massachusetts’ response to COVID-19 requires a step back, to early this spring.

As Massachusetts became one of the first states hit by COVID-19, the rapid spread of the virus presented an enormous challenge for the state’s world-class Department of Public Health. Recognizing the gap in Massachusetts’ prevention strategy—with 20 percent of cases requiring hospitalization, but the other 80 percent spreading in communities—Gov. Charlie Baker announced that the state would join with Partners In Health, drawing on PIH’s decades of experience fighting Ebola and other outbreaks. To stop community-based transmission, the state and PIH established the Massachusetts Community Tracing Collaborative (CTC)—the first large-scale coronavirus contact tracing program in the U.S.

Following an April 3 launch at the State House, PIH would rapidly hire and train more than 1,500 people, to support the state and its 351 local health departments in a broad scaling-up of case investigation and contact tracing. New CTC staff members began calling everyone who had tested positive for the virus, gathering details about people with whom they had been in close contact, and then calling those contacts to ensure they knew about their exposure and could quarantine safely.

The partnership between PIH, the Commonwealth, and local health departments introduced many Americans to contact tracing, a tried-and-true practice for public health practitioners. For PIH, contact tracing is foundational to placing equity at the center of an epidemic response, by ensuring that people who cannot quarantine safely get the material support to do so, and by directly engaging the community in response efforts.

Lessons from Sierra Leone became vital as PIH, the state, and local health departments worked to scale and launch the Massachusetts collaborative. Sierra Leone’s use of compassionate, community-based contact tracing to halt history’s worst Ebola outbreak has provided inspiration for Massachusetts’ COVID-19 efforts—and, now, for efforts by a growing list of other U.S. states and jurisdictions.

“We looked at our notes and were specifically referencing Sierra Leone,” said Dr. Joia Mukherjee, PIH’s chief medical officer and a leader of the organization’s U.S. COVID-19 response. “Contact tracing is something that allowed Sierra Leone to do well in the fight against Ebola. We need to take those lessons about tracing every contact and to think of strategies that will allow the most vulnerable to survive, while also enacting other public health measures.”

At the April announcement with Gov. Baker, Mukherjee talked about Tonkolili, a remote Sierra Leone district that was home to the country’s last person infected with Ebola. She recalled how teams checked every single person who entered the district.

“Everyone would get out of the car, be screened, temperature written down, cell phone numbers recorded. Every single contact was traced,” she said. “If they can do this in a place like Tonkolili, how can we say it is too late in the Commonwealth?

“You cannot do control of infection without social support, solidarity, and protection for the vulnerable. Those public health principles we've all learned together in places like Sierra Leone should be at the forefront today,” Mukherjee continued. “That model going from, as we say, Tonkolili to Tewksbury [Massachusetts].”

Contact tracing proved essential to ending the historic Ebola outbreak that killed thousands of people in West Africa from 2014 to 2016.

“It was very helpful,” said Gbessay Safa, Sierra Leone’s national coordinator for contact tracing. “We were able to contact every person who’d come into contact with a probable or confirmed case [of Ebola], and follow up with them for 21 days. That prevented the spread of the disease in many ways, and prevented new hot spots.”

The country’s Ebola contact tracing program relied on a force of 2,250 community contact tracers, working alongside community health workers. Their joint efforts aimed to not only identify cases and notify contacts of their exposure, but also ensure people’s ability to safely, comfortably quarantine—a tricky endeavor throughout Sierra Leone, where a majority of families living on the margins can’t afford to lose a day, let alone two weeks, of work outside the home.

Meals were a top priority among quarantining households; PIH partnered with other organizations focused on hunger prevention to advocate for families’ needs.

“In Kono, we had a family whose breadwinner got Ebola and was taken to a treatment center,” Barrie recalled. “It was painful for them; his wife and four kids had no other means. But our community health worker flagged that, and we helped a partner organization distribute their food support accordingly.

“We know—the evidence proves it—that when you connect social support and contact tracing, it works very well,” he said. “That is the humane way to treat people.”

Protection for the vulnerable is a cornerstone of the Massachusetts Community Tracing Collaborative.

CTC contact tracers not only inform people of their exposure to COVID-19, but also advise them on how to safely isolate, seek care, and obtain social services. Care resource coordinators then connect vulnerable patients and their families with local organizations that assist with needs like food, shelter, and mental health care. 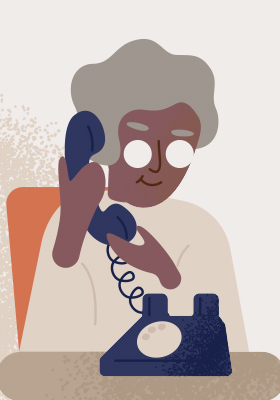 “A lot of inequalities in social services are becoming glaringly obvious through this work,” said Michelle Baum, a care resource coordinator. “People who are quarantining themselves might need food urgently, for example, or diapers or baby formula. Or rent money if they’re not able to work, or cleaning supplies if they’re sharing a space with someone who’s confirmed to have COVID-19.

“They call the CTC saying, ‘We’re going to leave the house’ because of these needs. And then contact tracers are able to say: ‘Hold on, a care resource coordinator is going to call you.’”

By the end of June in Massachusetts, contact tracers were reporting a median of two contacts per case (excluding people with zero contacts)—a low rate that speaks to the effectiveness of social distancing and pandemic response efforts led by the state’s Department of Public Health and local health departments. Relaxing such measures will inevitably increase transmission, especially among the majority of cases that are minor or asymptomatic and are “silently and unknowingly spreading the disease,” in Mukherjee’s words.

“We want to shine a light on that,” Mukherjee said. “A light with love and compassion, that can reach out to people and humanely let them know that they are at risk and help them to isolate themselves.”

Back to Sierra Leone

As a trusted government partner in Sierra Leone, PIH immediately began helping coordinate the country’s national response to COVID-19, which has now spread to all of the country’s 16 districts, including Kono, where PIH has worked for years to strengthen the overall health system.

Contact tracing has been a primary focus of the response, with Sierra Leone President Julius Maada Bio asking PIH to apply lessons from Massachusetts to Sierra Leone.

In so doing, Sierra Leoneans are using lessons from their own country and history.

Barrie coordinated with Safa and other government partners on a national contact tracing plan for COVID-19. Subsequently, PIH trained 1,540 contact tracers across Sierra Leone’s population of 7 million—a similar set up to the 1,900 contact tracers who cared for Massachusetts’ same-sized population at the height of cases in the state.

Currently, 110 contact tracers are assigned to each district in Sierra Leone, and PIH is providing specialized accompaniment to all 16 of those district efforts.

The government has also been providing food to all quarantining households. In Kono District in particular, social support is a robust part of stopping COVID-19.

When the country’s borders closed at the end of March, Kono was hosting an influx of Sierra Leonean families needing to immediately quarantine after returning from Guinea. PIH provided food and housing to allow them to do so.

Subsequently, the organization hired additional community health staff charged with educating households about the virus and linking patients and families with the resources they need to effectively quarantine. And when the district confirmed its first cases of COVID-19 on May 21, PIH began putting together social support referral plans and packages, which include soap and laundry detergent, food, and money for cellphone cards.

Yet as the pandemic begins to take hold in Sierra Leone and cases rise in Kono, limited funding threatens to stifle relief. There are now more than 50 cases in Kono, and more than 1,400 nationally—numbers that pale in comparison to Massachusetts’ more than 108,000 cases, but that likely reflect the challenges of widespread testing and, relatedly, of widespread social support.

“The key difference between the Ebola outbreak and the COVID outbreak is resources,” Barrie said. “Now we have the structures functionally in place, but resources to support them are lacking. This means that countries like Sierra Leone, all across Africa, are often unable to implement social support fully alongside contact tracing.”

Nonetheless, he added, “we’re doing a good job in Kono linking the two. We have budgeted to give around 500 households support; I’m cautiously optimistic we won’t get to that number.”

And while there’s a long road ahead, Barrie indicated he expects Sierra Leone eventually to see a similar sight to Tonkolili, where the last Ebola patient was identified four years ago—the country’s last COVID-19 patient, safely tested and quarantined.

“These are difficult times,” Barrie said. “But I’m sure we’ll all fight it together and overcome it.”